RE/MAX WHL Play of the Year

Welcome to the 2021-22 RE/MAX WHL Play of the Year showdown! Help us sort through the top plays from the 2021-22 WHL Regular Season to determine the ultimate champion!

We’ve randomly distributed 32 of the top plays from 2021-22 across a bracket, creating head-to-head matchups that will refresh every day, beginning Sunday, May 1. Visit @TheWHL on Twitter every day to cast your vote in a new matchup and help us determine the 2021-22 RE/MAX WHL Play of the Year! 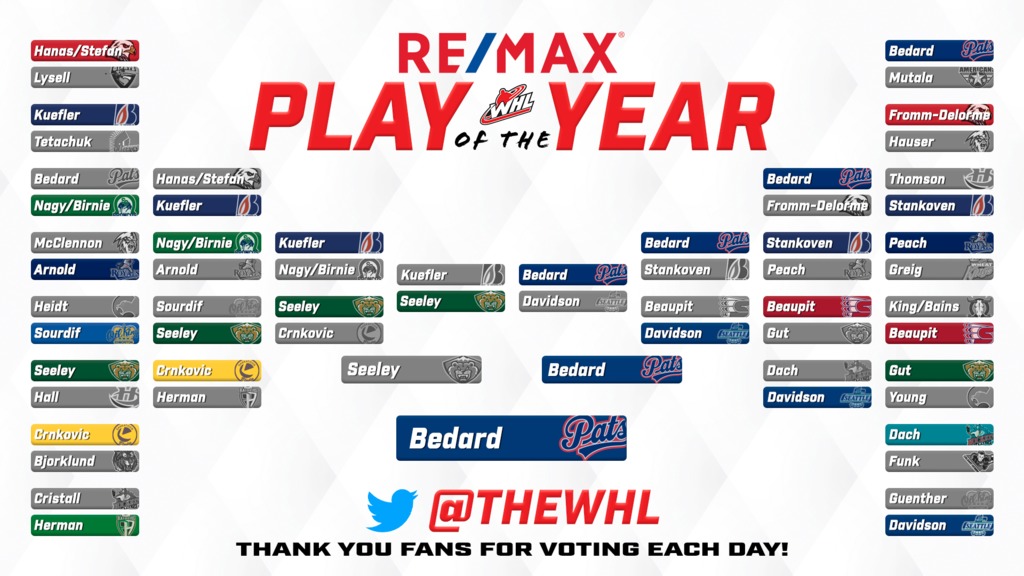 Wednesday, May 4: Connor McClennon (Winnipeg ICE) vs. Campbell Arnold (Victoria Royals)
Opposite ends of the WHL map on display in this matchup. Philadelphia Flyers prospect Connor McClennon showed off his silky mitts early in the season with a solo effort goal. We pair that up with a sensational stick save from Victoria Royals goalie Campbell Arnold, who stymied his former team in Spokane.

Thursday, May 5: Riley Heidt (Prince George Cougars) vs. Justin Sourdif (Edmonton Oil Kings)
Quick hands on display in this matchup. First, Prince George Cougars forward Riley Heidt shows off his trigonometry skills with a deft back-handed deflection. His goal goes up against Florida Panthers prospect Justin Sourdif, who danced through the Calgary defence to score a sensational goal in March.

Sunday, May 8: Andrew Cristall (Kelowna Rockets) vs. Evan Herman (Prince Albert Raiders)
We wrap up the left-hand side of the First Round bracket with a display of solo skills. First, Kelowna Rockets forward Andrew Cristall tries his luck at a lacrosse goal versus Portland. Choose between that play and a late-season beauty from Evan Herman of the Prince Albert Raiders.

Thursday, May 12: Bailey Peach (Victoria Royals) vs. Ridly Greig (Brandon Wheat Kings)
A pair of forwards go toe to toe in Thursday’s RE/MAX WHL Play of the Year matchup. Victoria’s Bailey Peach pulled off a lacrosse goal in December versus the Vancouver Giants. He goes up against Ridly Greig, and his silky overtime winner for the Brandon Wheat Kings at Swift Current.

Friday, May 13: Arshdeep Bains / Ben King (Red Deer Rebels) vs. Mason Beaupit (Spokane Chiefs)
Arshdeep Bains and Ben King enjoyed exceptional chemistry all season long for the Red Deer Rebels, and Friday’s matchup displays just one example of that. Vancouver Canucks prospect Bains drags and glides his way toward setting up King for a goal versus the Lethbridge Hurricanes; that play goes up against a great, early-season glove save by Spokane’s Mason Beaupit against Alex Swetlikoff of the Everett Silvertips.

Saturday, May 14: Michal Gut (Everett Silvertips) vs. Ty Young (Prince George Cougars)
Saturday’s first-round matchup features Everett Silvertips forward Michal Gut, who sliced and diced his way through the Spokane defence to score a terrific back-handed goal. He goes up against Prince George Cougars goalie Ty Young, who robbed the Kamloops Blazers while prone on his back with a superb glove snag.

Sunday, May 15: Colton Dach (Kelowna Rockets) vs. Zac Funk (Calgary Hitmen)
We turn our attention to Chicago Blackhawks prospect Colton Dach, who showed off some between-the-legs trickery for the Kelowna Rockets against Tri-City earlier this season. That goal goes up against Calgary Hitmen speedster Zac Funk’s solo effort versus Red Deer in Sunday’s RE/MAX WHL Play of the Year matchup.

Wednesday, May 18: Cole Nagy / Brady Birnie (Swift Current Broncos) vs. Campbell Arnold (Victoria Royals)
We continue the Second Round with a matchup featuring Swift Current Broncos teammates Cole Nagy and Brady Birnie, who dazzled in an effort versus the Calgary Hitmen. That play goes up against Victoria Royals goaltender Campbell Arnold, who robbed his former Club in his return to Spokane.

Friday, May 20: Justin Sourdif (Edmonton Oil Kings) vs. Ronan Seeley (Everett Silvertips)
We highlight a pair of solo efforts as we continue the Second Round of the RE/MAX WHL Play of the Year showdown. Justin Sourdif’s beauty versus the Calgary Hitmen goes up against Ronan Seeley’s rush against the Portland Winterhawks.