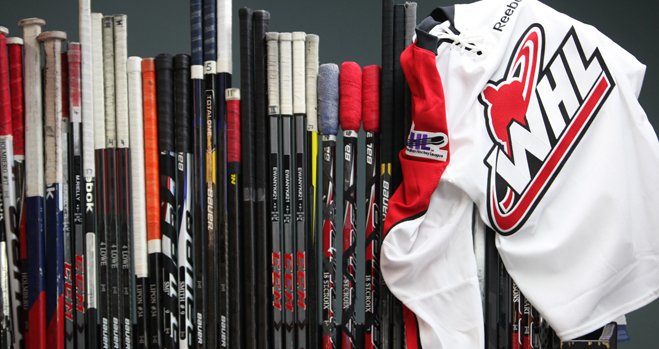 CALGARY, AB. – The Western Hockey League announced today the disciplinary action which has been taken against the Portland Winterhawks franchise for a series of violations of the WHL Regulations.

As a result of a series of player benefit violations which have occurred over the past four seasons, WHL Commissioner Ron Robison has suspended the Portland Winterhawks from participating in the first five rounds of the 2013 WHL Bantam Draft and the forfeiture of their first round selections in the 2014, 2015, 2016 and 2017 WHL Bantam Drafts.  Should the first round selection in 2014 not be available due to a conditional trade, Portland will surrender their second and third round picks in the 2014 WHL Bantam Draft.  The WHL also announced the Portland Winterhawks have been fined $200,000 and Winterhawks General Manager and Head Coach Mike Johnston has been suspended for the balance of the 2012-13 season, including the 2013 WHL Playoffs.

“All WHL Clubs understand they are required to fully comply and respect our League Regulations or they will face significant consequences,” stated WHL Commissioner Ron Robison.  “WHL Clubs are required to fully disclose all commitments they make to a player in the WHL Standard Player Agreement.  Our independent investigation in this case revealed there were multiple violations over an extended period for player benefits that are not permitted under WHL Regulations and were not disclosed to the WHL.  It should also be noted through the course of the investigation there was no evidence of any payments or enhanced education benefits provided to players that would be contrary to WHL Regulations as previous media reports indicated.”

The Western Hockey League will not make any further public comments on this matter.