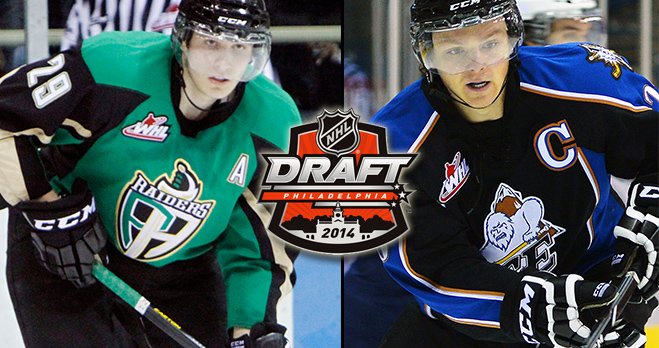 Philadelphia, PA — The 2014 NHL Draft is set for this weekend at the Wells Fargo Center in Philadelphia, PA, with the first round getting underway on Friday, June 27th.

Led by Kootenay Ice captain and 2013-14 WHL Player of the Year Sam Reinhart, the WHL’s 2014 draft class features some strong offensive talent, both at the forward and defence positions.

Reinhart, who is ranked 3rd among North American skaters in NHL Central Scouting’s final rankings for the 2014 NHL Draft, is at the forefront of the WHL’s talent pool.  Already with three full WHL seasons under his belt, Reinhart is a playmaker with tremendous smarts, vision and skill.  The 6’1”, 183-lb centre finished fourth among all WHL players in scoring this past season with 105 points, including 36 goals, and also represented Canada at the 2014 IIHF World Junior Championship.  The youngest of three Reinhart boys, Sam has established himself as an elite offensive force in the WHL and a potential first overall pick in the upcoming NHL Draft.

“He’s the most intelligent player in the WHL, as far as hockey sense is concerned,” said Kootenay Ice head coach Ryan McGill.  “His vision and his ability to deliver the puck to team mates at speed and in traffic would be his top attributes, for sure.

“He doesn’t have any deficiencies, which means when he plays with better players, he’s only going to get better,” he said.

While his skill and smarts are obvious to those who watch him, Reinhart also boasts a tremendous competitive will that drives him to be a winner and a difference-maker.

“He has the high-end skill, he’s a great skater, but mainly he’s got a competitive edge to him that we really think he can be a game-changer,” said NHL Central Scouting director Dan Marr of Reinhart at the 2014 BMO CHL/NHL Top Prospects Game in January in Calgary, AB.  “He can go out there and play like he’s a warrior, and that’s something that really impressed us.”

“He’s going to be a guy that can play 30 minutes a game, play on your power play and penalty kill, and a guy who ultimately could be someone to build a franchise around…he has that kind of potential,” said Green.

Not far behind Reinhart is German centre Leon Draisaitl of the Prince Albert Raiders, who finished tied with Reinhart for fourth in WHL scoring last season with 105 points.  A big, rangy pivot with poise, excellent hockey sense and passing skills, Draisaitl has the ability to control the pace of play and distribute the puck in the offensive zone.  Standing 6’2”, 209-lbs, Draisaitl can also drive the puck to the net and protect the puck as good as any player in the WHL.

“He’s a big, powerful kid, he protects the puck so well and is very difficult to knock off the puck, and his awareness and ability to make plays is through the roof,” said Raiders’ general manager Bruno Campese of the 4th ranked North American skater on NHL Central Scouting’s list.  “He’s got great vision, great playmaking skills and is just a really hard player to play against because of his ability to control the puck and control the play.”

In Calgary, fans of the Calgary Hitmen are already familiar with what the 6th ranked skater, right winger Jake Virtanen, brings to the table.  A swift and powerful skater who possesses a tremendous shot, Virtanen led all NHL Draft-eligible players in the WHL with 45 goals while adding 26 assists for 71 points in as many games for Calgary.  The No. 1 overall pick from the 2011 WHL Bantam Draft, Virtanen is a budding power forward with plenty of room to grow and develop.

“His power and his speed, and being willing to go through someone to score a goal,” said Hitmen general manager Mike Moore when describing Virtanen’s best attributes.  “He’s a dynamic guy that, when he gets the puck, can make a lot of things happen, from our end all the way down to the opponent’s goal line.”

In Saskatoon, SK, Russian rookie Nikita Scherbak, the 15th ranked skater in NHL Central Scoouting’s final rankings, has wowed Blades fans with his pure offensive skills and his admirable willingness to engage physically.  Not much was known about Scherbak before the start of the 2013-14 WHL season.  However, it didn’t take long for the 6’2”, 174-lb, Moscow-born winger to showcase his outstanding offensive repertoire.  Netting 28 goals and 78 points in 65 games, Scherbak carried the Blades on his back at times this past season while leaving a big impression on NHL scouts.

“He’s an electrifying type of player who has game-changing ability,” said Colin Priestner, Managing Partner of the Saskatoon Blades.  “His skating is at the highest end in Junior hockey…he’s an elusive skater, and his ability to turn and shift is among the best in the WHL… He’s a guy who I think could be the steal of the NHL Draft this year.”

The WHL’s 2014 draft class also boasts strong offensive acumen among the draft-eligible defencemen, led by Finnish rearguard Julius Honka, the 11th ranked skater in NHL Central Scouting’s final rankings. The 5’11”, 180-lb blue liner from Jyaskyla, Finland, broke into the WHL with the Swift Current Broncos and quickly established himself as a force, earning WHL Player of the Week honors in the first week of the 2013-14 season.  A strong skater with excellent hockey sense and puck skills, Honka is at his best in the offensive zone, as is evident by the 16 goals and 56 points he put up for the Broncos this season.  Yet, Honka is also strong and dependable in his own zone.

“He’s very gifted, offensively, and he became one of the best defencemen in the WHL,” said Swift Current Broncos’ general manager and head coach Mark Lamb of Honka.  “He’s extremely competitive, he can really shoot the puck, he’s got great offensive instincts, and his defensive game – he’s played against all the top players all season – he’s turned himself into a good shutdown guy, too.”

In Red Deer, AB, the Rebels’ blue line was led by 17-year-old rearguard Haydn Fleury, the 9th ranked skater in the NHL Central Scouting rankings.  A terrific and effortless skater with size and puck-moving skills, Fleury has gotten better and better as time has gone on.  Having put up eight goals and 46 points for the Rebels during the regular season, Fleury went on to help Canada win Bronze at the 2014 World Under-18 Championship in April while being named the tournament’s Top Defenceman.

The Swift Current Broncos boast another offensively-inclined rearguard, Brycen Martin, who will hear his name called sooner rather than later at the 2014 NHL Draft.  The Calgary, AB, product is a smooth skater who can distribute the puck effectively in the offensive zone and carry the puck up the ice or join the offensive rush.

“His skating and his hockey sense are his biggest assets, and he’s probably one of the best, if not the best first-pass players in the League,” said Swift Current Broncos’ head coach and general manager Mark Lamb.

For more on the 2014 NHL Draft and to follow the draft on Sunday, visit NHL.com