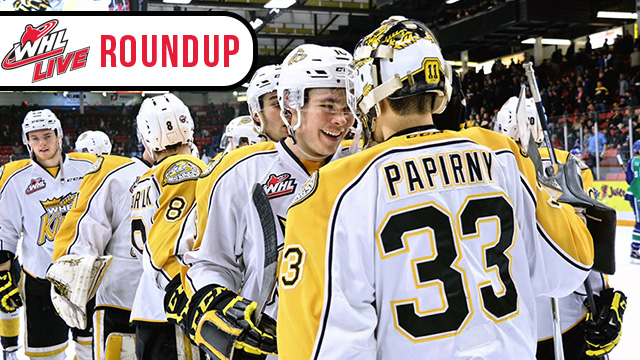 John Quenneville recorded two goals and an assist to guide the Brandon Wheat Kings to a 6-2 win and the Eastern Conference title. Brandon outshot Swift Current 47-36, including a 22-5 margin in the second period. Wheat Kings netminder Jordan Papirny was solid in stopping 34 of 36 shots to post the win.

Wyatt Hoflin was brilliant as he recorded 51 saves to post the shutout for the Kootenay ICE in their 2-0 nod over the Edmonton Oil Kings. The ICE played the role of spoiler once again as they picked up their second straight victory over a Club battling for a playoff berth in the Eastern Conference. ICE forward Matt Alfaro registered two points (1g-1a) to earn second star honours.

The Calgary Hitmen doubled up the Red Deer Rebels by a score of 4-2 to earn the road win. Jake Bean registered two helpers for the Hitmen who have locked up third place in the Central Division standings. Rebels captain Luke Philp tallied two assists in a losing cause.

The Seattle Thunderbirds cruised to their 11th straight victory and have clinched the U.S. Division title after defeating the Spokane Chiefs 4-1. Thunderbirds forward Scott Eansor gathered first star mentions after notching a goal and two assists for a three-point night. Mathew Barzal added to the scoring by capitalizing on a penalty shot attempt in the middle frame.