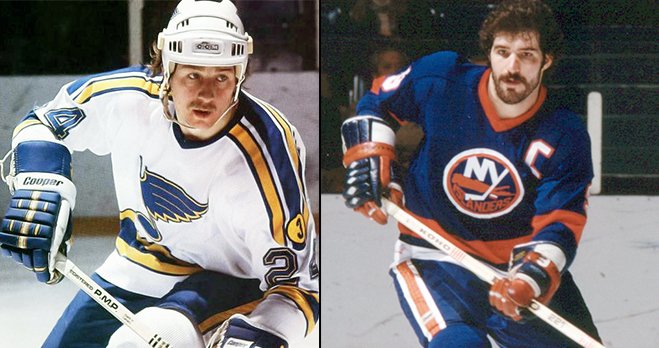 REGINA, SK – The Saskatchewan Hockey Hall of Fame inducts its class of 2013 on July 27, 2013, at an induction ceremony in Regina, SK, with four WHL Alumni among those being honored.

The 2013 Hall of Fame class consists of WHL grads Bernie Federko and Clark Gillies along with Gordon ‘Red’ Berenson and Eddie Shore in the ‘Players’ category, WHL Alumni Delbert ‘Del’ Wilson along with longtime Chairman of the Hockey Hall of Fame Bill Hay in the ‘Builders’ category, WHL officiating alumnus Michael ‘Mick’ McGeough under the ‘Officials’ category, Jack Maddia in the ‘Grassroots’ category, and the 1914 Regina Victorias in the ‘Team’ category.

Bernie Federko, a native of Foam Lake, started with the Foam Lake Flyers, moving on to an outstanding junior career with the Saskatoon Blades from 1973-76. During that time, he scored 166 goals with 245 assists in 249 league and playoff games. Thanks to an amazing last year, he was chosen 7th in the NHL draft by the St. Louis Blues. In the ‘76/77 season, he split his time between the Blues and Kansas City of the CHL, where he was named the league’s Rookie of the Year. The next season, he moved up to the Blues, where he played for another 12 years (total of 1976-89). Federko finished his career with the Detroit Red Wings after the 1989/90 season.

Clark Gillies was born and raised in Moose Jaw where he played baseball in the summer and hockey in the winter. He was a great ball player, playing 3 seasons in the minors in Houston, but ultimately, he decided to pursue hockey. He played for the Regina Pats for 3 seasons with his final season culminating in a Memorial Cup win (1974).  Clark was the 4th overall pick in the 1974 NHL draft, chosen by the New York Islanders. In the late 70’s and early 80’s, he was one of the NHL’s premier left wingers and was a 1st team All-Star in 1978 & ’79. He was also the MVP in the 1979 Challenge Cup series vs. the Soviets. He played on the so-called “Long Island Lightning Company” line, with line-mates Bryan Trottier and Billy Harris who was later replaced by Mike Bossy. Clark was only 22 when, in 1977, he was selected to be the new captain of the Islanders. Clark played with the Islanders until 1986, leading them to 4 consecutive Stanley Cups. In ’86, he was traded to the Buffalo Sabres where he played 2 more years before retiring in 1988.

A native of Craik, Del Wilson has been a fixture with the Pats, boasting a 25 year career with junior hockey in Regina. He began his hockey career as a goaltender for the Regina Abbotts in 1945 and the Pats from 1946 to 47 (when the Abbotts and Regina Commandos were joined). Del began coaching the Pats Minor teams in 1948, coaching Bantam, Midget, Juvenile, and Junior B teams simultaneously until 1965, winning 35 provincial and 3 international titles. He became the General Manager from 1956 to ‘68 while also scouting for the Canadiens in Western Canada.  He was a driving force in establishing the Western Canada Junior Hockey League and the Canadian Major Junior Hockey League and in 1970, he was part of the group that led the WHL into a partnership with Ontario and Quebec.  Wilson was part of a group of investors to purchase the Pats in 1970 and once again served as General Manager and President for another 6 seasons. Del left the Pats in 1980 but continued to be involved, serving as chairman of the board of the WHL for 6 years and chairman of the board of the CJHL. He served one year as president of the WHL. He was Referee-in-Chief for the WHL from 1980-82 and, in 1995, retired as a scout for the Canadiens after 47 years (1948–’95).

Mick McGeough, a Regina native, got his start working games at the age of 23, following a hockey career that wrapped up in Spokane, Washington in the Western International Hockey League.  He started out as a linesman in the WHL but quickly switched to referee. He moved up the ranks with his WHL culminating in officiating the 1986 Memorial Cup final.  In 1987, he moved to the NHL:

For more on the 2013 Saskatchewan Hockey Hall of Fame inductees, CLICK HERE