“When the puck drops for the start of the WHL Regular Season, everyone associated with the League, particularly our players, are excited to get things underway,” commented WHL Commissioner Ron Robison. “We are looking forward to another very competitive season in the WHL.

“When you look at next year’s NHL Draft and the quality of prospects in the WHL, this could be one of the greatest crops of prospects we have ever produced. That is a pretty large statement when you consider the number of players we have produced over the years. We are really excited about the prospects coming up and the quality of teams we have throughout the WHL this season.”

Playing four less games during the Regular Season will serve to reduce travel and balance the schedule while providing more time for players to focus on training and skill development, as well as their academic studies.

“I give credit to our team ownership and management who all felt very strongly this was the right thing to do for the players,” commented Commissioner Robison.

“We recognize that the majority of our players are student athletes and are pursuing their education while they play in the WHL. We are fully committed to making sure our players can pursue their academic goals while playing at the highest level in the amateur hockey system.”

The WHL has adopted new restrictions on the trading of 15- and 16-year-old players. Effective this season, a 15- or 16-year-old player who has signed a WHL Standard Player Agreement cannot be traded under any circumstance.

In strengthening the WHL’s Player Safety Seven Point Plan, Kevin Acheson was appointed the WHL Director, Player Safety and is responsible to oversee all on-ice discipline and supplemental discipline matters during pre-season, regular season and playoff games. In addition, new standards have been implemented with a particular focus on repeat offenders and checks to the head.

For the first time since 2013, the Canadian Hockey League permitted the selection of import goaltenders at the 2018 CHL Import Draft in June. In all, three import goaltenders appear set to start the season in the WHL, including Vegas Golden Knights prospect Jiri Patera (Czech Republic) of the Brandon Wheat Kings, New Jersey Devils prospect Akira Schmid (Switzerland) of the Lethbridge Hurricanes, and Mads Sogaard (Denmark) of the Medicine Hat Tigers.

Maintaining its position as one of the world’s finest development leagues, not only for players, but for coaches and officials alike, the WHL hosted its WHL Leadership Conference this past August in conjunction with the 2018 Hlinka Gretzky Cup in Edmonton. The WHL Leadership Conference brought together hockey minds from all levels of the game, including the NHL, in an effort to share ideas and best practices, while discussing how to provide the best possible environment for today’s player.

The WHL recently announced the appointment of former NHL Referee Tom Kowal to the position of WHL Officiating Development Coach. In this the first year of his new role, Kowal will develop a coaching plan for WHL Officials, providing game and video supervision of WHL Officials, as well as developing video training materials to provide instruction for WHL Referees and Linesmen, as well as officials in the system throughout Western Canada.

Red Deer will once again serve as a hub for Major Junior hockey in 2019, beginning with the 2019 Sherwin-Williams CHL/NHL Top Prospects Game at the ENMAX Centrium on Wednesday, January 23, 2019. The WHL will then celebrate its annual WHL Awards on Wednesday, May 1, before wrapping up festivities in Red Deer with the 2019 WHL Bantam Draft on Thursday, May 2.

Additionally, Red Deer will play host to the 2019 Canada Winter Games from February 15 to March 3, which will feature many of the WHL’s top prospects competing for hockey glory on a national stage.

The CIBC Canada Russia Series returns to British Columbia as Kamloops and Vancouver will play host on November 5 and 6, respectively. The best and brightest the WHL has to offer will take to the ice at the Sandman Centre in Kamloops and the Langley Events Centre in Vancouver as part of a six-game series featuring all three Canadian Hockey Leagues in a preview of the 2019 IIHF World Junior Championship, scheduled for December 26, 2018 to January 5, 2019 in Vancouver and Victoria.

What We Stand For: The WHL Player Experience

The WHL is fully committed to providing our players with a world-class hockey experience. We believe our WHL Member Clubs offer our players the highest quality of hockey experience available in the world today and this can be best described by our three key cornerstones: Development, Education and the Environment.

“The player experience is the number one priority for all WHL teams,” commented Commissioner Robison. “As one of the premier development leagues in the world, we pride ourselves in developing our players and remain committed to providing all the support they need to get to the next level in the game of hockey.”

We provide the highest level of competition for junior age players in North America. The quality of our coaching, facilities and professional support services offers the ideal setting for players to develop their skills.

The WHL offers the most comprehensive education program in North America. WHL Clubs are governed by League-wide education standards to ensure players not only achieve their high school academic goals, but also qualify for post-secondary studies. While playing in the WHL, players receive financial assistance for post-secondary course. The WHL also offers a full guaranteed scholarship to all our players, which can be applied to any post-secondary institution of choice.

The WHL is committed to offering the best possible experience we can for our players, including a mandatory series of national health and wellness programs, such as the CHL Drug Education and Anti-Doping program, the Red Cross RespectEd program and our new Canadian Mental Health initiatives, among others. When combined with our WHL Seven Point Plan player safety initiative, these programs provide our players with a safe and healthy environment in which to develop.

Based upon a recommendation by WHL Education Advisors, the WHL Office has introduced GradeSlam as a tool for all WHL student athletes through high school and post-secondary courses.

GradeSlam powers personalized learning by providing students with 24/7 access to a private tutor for any subject through a chat-based service. The platform aligns with the WHL’s continued commitment to the importance of education by encouraging all types of learners to actively and instinctively seek academic help through the limitless, spontaneous and uninhibited communication of instant messaging.

“The WHL and our Member Clubs are very proud to continue offering our players the most comprehensive hockey scholarship program of its kind in North America today,” commented Commissioner Robison. “It is great to see that the majority of our graduates are now utilizing their WHL Scholarships.”

Every player who plays in the WHL is eligible to receive the WHL Scholarship. For every season a player plays in the WHL, they receive a guaranteed, full-year WHL Scholarship, including tuition, textbooks and compulsory fees to a post-secondary institution of their choice. WHL players can also access financial assistance for post-secondary courses while playing in the League prior to accessing their WHL Scholarship. The WHL and Athabasca University have partnered to offer, through online and other distance education vehicles, fully-accredited university courses to any WHL player or WHL Graduate interested in further pursuing post-secondary studies while playing in the WHL or after they graduate from the League.

Three WHL Clubs are in the evaluation process as they vie for the right to host the Memorial Cup when it returns to Western Canada in May 2020. Bids have been received from the Kamloops Blazers, Kelowna Rockets and Lethbridge Hurricanes. Previously, the Victoria Royals expressed their intent to bid to host the tournament, before later withdrawing.

The winning bid for the right to host the 2020 Memorial Cup will be announced at the conclusion of the WHL Board of Governors Meeting on Wednesday, October 3 in Calgary.

The WHL is proud to give back to its communities through a number of community initiatives scheduled for throughout the 2018-19 season, including the second run of RE/MAX presents WHL Suits Up with Don Cherry to Promote Organ Donation. The WHL is also eagerly anticipating the third seasons of the Ashley HomeStore Hope to Dream initiative and Chatters A Beautiful Woman program in recognition of incredible billet mothers around the league, among others.

Challenges Around Anti-Doping & the Legalization of Cannabis

Though cannabis will be legalized in Canada on October 17, 2018, it remains a banned substance under the CHL Drug Education & Anti-Doping Program.

“That policy is very clear for the players – they cannot participate in any use of cannabis or other performance-enhancing drugs,” commented Commissioner Robison. “Consequently, it is incumbent on us to make sure we have a very effective education program to make sure the players are aware of that, first of all, and to really help promote a healthy lifestyle.”

There will be a handful of banner raisings throughout the opening weekend of the 2018-19 WHL season, providing special memories for fans across Western Canada and the U.S. Pacific Northwest.

Friday evening, the Swift Current Broncos will celebrate their 2018 Ed Chynoweth Cup victory by raising to the rafters their first WHL Championship banner since 1993 as the Saskatoon Blades visit Innovation Credit Union i-Plex.

As the WHL’s top Club during the 2017-18 regular season, the Moose Jaw Warriors will celebrate in fashion on Saturday night when they raise two banners – one as Scotty Munro Memorial Trophy champions, and the other as champions of the WHL’s East Division. With the Brandon Wheat Kings visiting Mosaic Place and a 50/50 draw having already exceeded $150,000 in the total pot, folks in Moose Jaw are about to enjoy the return of WHL hockey in an incredible way.

Saturday night, the Everett Silvertips will hang two banners of their own, including the Club’s sixth U.S. Division championship banner and second Western Conference championship banner when they host the Vancouver Giants at Angel of the Winds Arena.

The Medicine Hat Tigers will enjoy sending a Central Division banner to the rafters on Saturday night when the Lethbridge Hurricanes visit the Canalta Centre.

The Kootenay ICE are set to celebrate their 20th anniversary season in the city of Cranbrook. Enjoying their inaugural campaign in Edmonton during the 1996-97 season, the ICE moved to Cranbrook in time for the 1998-99 WHL Regular Season.

The WHL Alumni Association has appointed a new executive committee ahead of the 2018-19 WHL season. 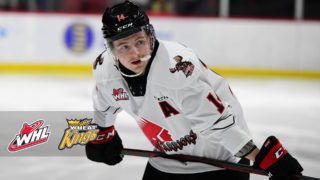