It happened overnight for Vince Loschiavo.

One day, he is living out his pro hockey career. Walking past the picturesque Italian Alps to morning skate. Taking weekend trips to Barcelona and relaxing on the beach. The next, he’s cooped up in his childhood bedroom under a strict mandated 14-day isolated quarantine.

“We woke up one morning to the news our season got cancelled and the next night I was going to sleep in my own bed back home,” said Loschiavo.

The Winnipeg native and former Edmonton Oil King, like many in the hockey world, is now left to reflect on an unfinished season ended abruptly due the global pandemic COVID-19.

Loschiavo finished his junior career in Edmonton last spring and signed a one-year deal in the Alps Hockey League with Asiago, Italy for his first year of professional hockey. A league that hosts teams from Italy, Serbia and Austria and is home to dozens of ex-CHL players. 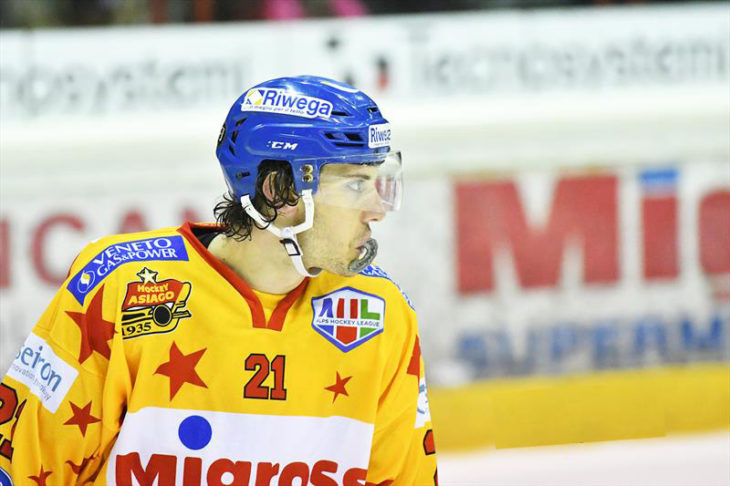 Italy was more than a hockey destination for Loschiavo. With a last name like that, no one was picking him out as an import player by his jersey.

“I chose it because my dad was born in Italy,” said Loschiavo. “I was able to meet family that I’ve never met before.”

The scenery didn’t hurt either.

“It was so nice there,” recalled Loschiavo. “A beautiful downtown, filled with tourists. The weather was amazing year-round. It was really turning into a great experience for my first year in Europe.”

Asiago is a small town nestled in the foot hills of the Alps in Northern Italy. Surrounded by ski resorts, the population of 6,000 swells on weekends with the hot spot being the HC Asiago home arena that holds half the town’s population every game.

“We filled it up and it got real loud,” said Loschiavo. “It was just like a soccer game. Everyone singing and chanting the whole game. It was a crazy atmosphere.”

There’s a lot of change that comes in your first year of professional hockey. From the competition to living on your own. For Loschiavo, all this was unfolding almost 8,000 km from home surrounded by a new language.

“Maybe a bit more pasta for the pre-game meal,” joked Loschiavo about the biggest difference. “The big (international sized) ice and playing against older guys who have been playing pro for years took some time, but I think I adjusted nicely.”

Loschiavo finished the regular season just under a point per game and his Asiago team won the Italian Championship mid-season tournament. Sitting fifth in the 18-team league, it was pointing towards a strong playoff push when everything started to change.

“We heard they wanted to put the playoffs on hold. We played three games with no fans in the arena already,” recalled Loschiavo.

Italy’s COVID-19 story was unfolding weeks ahead of North America’s. While the WHL and NHL ended abruptly, Europe’s leagues had a gradual closure.

“All of sudden the singing fans were gone and it was so different,” said Loschiavo, “so quiet.”

“Then we heard the playoffs were on hold for week,” said Loschiavo. “But before that time frame was even up we had a team meeting and were told it was cancelled completely.”

On March 11, with the world changing hourly, Loschiavo was in a race against the clock to get home. That week the country climbed from 12,000 confirmed COVID-19 cases to almost 60,000 and each day was closer to a complete lockdown.

“We heard airports were closing,” Loschiavo remembered. “My family was a little bit worried. But the team got all 10 Canadians on the same flight right away. We’re all just happy I got home before everything completely shut down. We got out just in time.”

Just like that, the Italian Alps were a world away and hockey was an afterthought.

“Honestly I’m just excited to be home safe and not stuck there,” admitted Loschiavo. “The infected rate wasn’t very high in Asiago and we weren’t on complete lockdown when I was there. It got a lot busier since but luckily all my teammates are safe and just staying home, locked down.”

While it likely won’t be anything like his first, year two after junior hockey could go in a number of directions for Vince. The WHL scholarship program allows him to take the collegiate route, however, a shortened first year pro leaves him weighing his options.

“I guess good news is I’ve got some time to think about what I want to do next year now, hey?”