The Seattle Thunderbirds and Red Deer Rebels came together on their second trade in as many weeks Monday, sending forward Alex Morozoff south of the 49th parallel.

In exchange, the Rebels have acquired a fifth-round selection in the 2021 Western Hockey League Bantam Draft.

“Alex is a player I have liked for quite a while,” La Forge said. “I think he will come in and compete for quality minutes and will be a really good addition to our lineup.”

A 6-foot-0, 189-pound product of Saskatoon, Sask., Morozoff was originally selected by the Rebels in the seventh round, 149th overall, of the 2016 WHL Bantam Draft. The 18-year-old posted career-high totals last season, recording 15 points (8G-7A) in 64 games. As part of his eight goals, he notched one power-play goal and three game-winning goals.

On Tuesday, August 27, the Thunderbirds acquired defenceman Hunter Donohoe from the Rebels in exchange for a conditional seventh-round pick in the 2020 WHL Bantam Draft.

Seattle will close out their 2019 WHL Pre-season schedule Tuesday, September 10 (7:05 p.m. PT) against the Everett Silvertips. The Rebels return to action Friday, September 13 (7:00 p.m. MT) when they play host to the Medicine Hat Tigers. 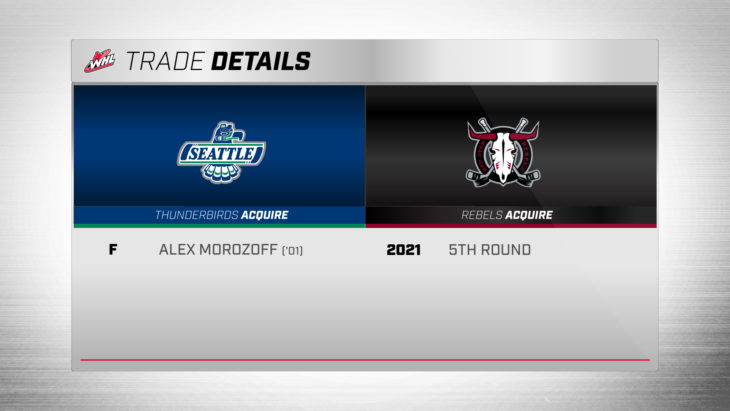