Stuart Skinner knows a thing or two about success.

And at the tender young age of 22, he continues to rack up the wins.

“It was a lot of fun to get right into it,” Skinner said during post-game media after Sunday’s triumph. “[Ottawa] got a ton of shots at the start there, so it was nice that we got up a couple and the guys in front of me were playing really good tonight.

“I was a little bit nervous at the beginning. I had to take a couple deep breaths, lean back and kind of see everything happening, and just try to stay focus, not get too overwhelmed.”

Just a kid from the neighbourhood. #LetsGoOilers pic.twitter.com/NxWqaZ2v4e

Skinner, who was selected by the Oilers in the third round (78th overall) of the 2017 NHL Draft, is no stranger to winning. For starters, his last WHL appearance came on May 13, 2018 – a 3-0 triumph over the Everett Silvertips in Game 6 of the 2018 WHL Championship. The shutout victory delivered a WHL Championship to the Swift Current Broncos for the first time since 1993.

The lanky guardian was rock solid for the Broncos that spring, winning 16 of his 26 WHL playoff games, recording a 2.20 goals-against average and .932 save percentage, powered by an astounding six shutouts.

Prior to landing in Swift Current and raising the Ed Chynoweth Cup, Skinner began his career as a standout with the Lethbridge Hurricanes. Selected by the Hurricanes in the first round (17th overall) of the 2013 WHL Draft, he appeared in 182 career regular season outings with Lethbridge from 2013 through January 2018, before being shipped to the Swift Current Broncos in a WHL Trade Deadline blockbuster on January 9.

Though Skinner’s WHL legacy was cemented with the outstanding performance he put on during the 2018 WHL Playoffs, he had already re-written the Lethbridge Hurricanes record book before appearing in a game for the Broncos. At the time of his departure from Lethbridge, Skinner owned the records for most career shutouts (10), most saves (5,318) and most games played by a goaltender (182). All those records still stand in Skinner’s name today. Of course, many will remember him for becoming the seventh goaltender in WHL history to record a goal, after he turned the trick in a 9-3 win over the Medicine Hat Tigers on Friday, March 18, 2016.

It wasn’t a simple jump from the WHL to the NHL for Skinner. He’s battled for the opportunity he earned this past Sunday, spending time in Wichita of the ECHL (41 games, 2018-19) and Bakersfield of the AHL (41 games, 2019-20). But with his first NHL win under his belt, the sky is the limit for Skinner.

“Obviously, it’s a dream come true for me but also for my whole family,” Skinner said. “My whole family has made a ton of sacrifices for me to be in the position that I am in right now.”

Skinner and the Oilers return to action Tuesday evening (8 p.m. MT) when they host the Ottawa Senators.

“My family has made a ton of sacrifices for me to be in the position that I’m in. It’s not only a dream come true for me, but for my family.” 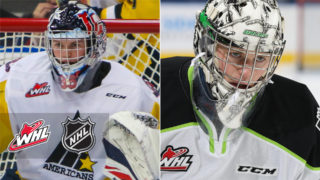