The Everett Silvertips just made their case for a fourth-straight U.S. Division title a little stronger.

“Ethan and Kasper are two very exciting players that have the abilities to entertain our fans every night, and address needs of our club down the stretch,” said Silvertips general manager Garry Davidson. “We’ve been working hard to acquire a player with Ethan’s skill set and intangibles, as he developed into a dependable and productive forward who earned the role as captain in Swift Current.

“With Kasper, the sky is the limit. He’s rightfully earned serious attention for the upcoming NHL Draft as a defenceman with high end skill, and there’s still plenty of mileage ahead of him in this league. We’re extremely satisfied with the individuals we’ve added and look forward to welcoming Ethan and Kasper to Silvertip Country.”

Regnier helps the Silvertips forward depth while Puutio will contribute to the team’s blue line depth.

A 5-foot-10, 184-pound product of Prince Albert, Sask., the 19-year-old Regnier had spent his entire WHL career with the Broncos, originally selected by them in the 11th round, 230th overall, of the 2015 WHL Bantam Draft. This season, Regnier has posted 21 points (9G-12A), including two power-play goals and one game-winning goal in 34 games, leading the team in scoring. He was a part of the team’s WHL Championship victory in 2018.

The right winger could find himself in an effective role in the team’s middle six as the Silvertips look for more offence. Their 129 goals for rank 10th in the WHL, while they rank second in goals against, having just conceded 95 goals through 38 games.

Looking to aid in the team’s defence, Puutio is a key add in the now and the future for the Silvertips. The 5-foot-11, 181-pound rear guard was selected first overall by the Broncos at the 2019 Canadian Hockey League Import Draft. In 35 games this season, the 17-year-old Vaasa, Finland product has recorded 16 points (1G-15A). Puutio is currently listed as a ‘C’-rated prospect for the 2020 NHL Draft by NHL Central Scouting.

Though it may end up being a later selection, the deal also allows the Broncos to move into the first round of this year’s WHL Bantam Draft. Their first-round pick in 2020 was originally sent to the Lethbridge Hurricanes in the deal to acquire goaltender Stuart Skinner and Giorgio Estephan. Last year, the pick was traded to the Regina Pats in the deal to acquire Jake Leschyshyn and Nick Henry.

Per the Broncos, the team now holds 10 selections in the first five rounds of the 2020 WHL Bantam Draft.

The deal will also see the acquisition of Fasko-Rudas and Hendren.

“In Parker we have a puck moving, transitional defenceman that shoots the puck very well.”

A product of Banska Bystrica, Slovakia, the 19-year-old Fasko-Rudas could be a key component for the Broncos’ offence.

Selected 58th overall by the Silvertips in the 2017 CHL Import Draft, Fasko-Rudas has provided key depth scoring at the forward position for the U.S. Division club. This season, he has eight points (4G-4A), including one power-play goal and one game-winning goal in 17 games.

In Hendren, the Broncos will see the Regina, Sask. product return close to home. The 5-foot-11, 200-pound defenceman was selected in the seventh round, 134th overall, of the 2016 WHL Bantam Draft by the Vancouver Giants. In 38 games this season with the Silvertips, he has two points (1G-1A). For 74 WHL regular season games, Hendren has four points (2G-2A). 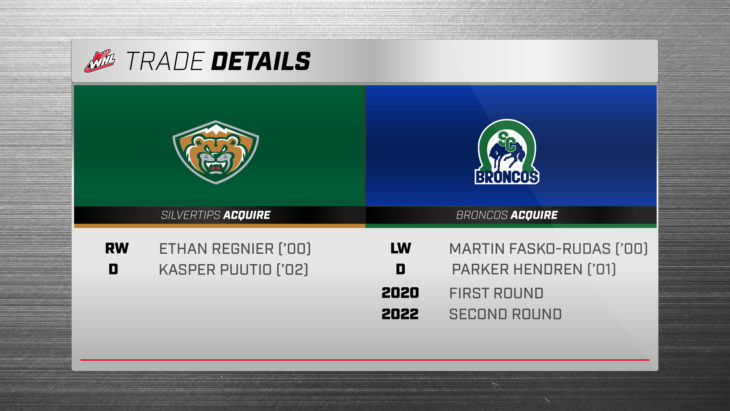