Ty Kolle is returning to the U.S. Division following a Saturday trade between the Regina Pats and Everett Silvertips.

“We are happy to add Ean to our prospect group,” said Pats VP of Hockey Operations and General Manager John Paddock. “The two draft picks in 2020 and 2021 are also important for our organization moving forward.”

Currently in the midst of a career-best season, the 19-year-old Kolle is a solid add to the Silvertips’ forward group who is competing for the top spot in the U.S. Division and Western Conference. Through 35 games this season, the 5-foot-7, 176-pound product of Kamloops, B.C. has posted 23 points (14G-9A), including five power-play goals and two game-winning goals.

Kolle was originally selected in the fourth round, 70th overall, by the Portland Winterhawks in the 2015 WHL Bantam Draft. For his WHL career, Kolle has accrued 68 points (37G-31A), including 14 power-play goals and six game-winning goals in 172 WHL regular season games with the Winterhawks, Lethbridge Hurricanes, and Pats.

In the 2018 WHL Playoffs with the Winterhawks, he recorded two assists in seven games.

“Ty is a skilled forward who has a proven ability to finish and brings experience competing in the U.S. Division,” said Silvertips General Manager Garry Davidson. “As a 19-year-old forward with an opportunity to play in a significant role with us moving forward, we like how his abilities complement the group we have at the halfway point of the season. We look forward to welcome Ty to the Silvertips family.”

The Silvertips are in action Saturday, January 4 (7:00 p.m. PT) against the Prince George Cougars at the CN Centre. Kolle won’t have to wait long to face his former teammates as the Silvertips welcome the Pats to Angel Of The Winds Arena on Sunday, January 12 (4:05 p.m. PT). 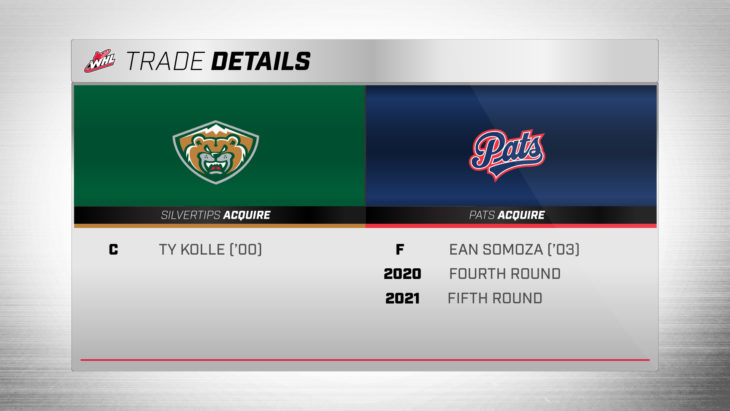