The Tri-City Americans have agreed to a deal that sees Carson Sass acquired by the Kelowna Rockets in exchange for a 10th round selection in the 2022 Western Hockey League Bantam Draft.

Sass, a 6-foot-1, 190-pound blueliner spent the last three seasons with the Red Deer Rebels before being acquired by Tri-City over the off-season on August 1, 2019. In 219 WHL regular season and playoff games, Sass has totaled 39 points (9G-30A). Originally, the Melville, Sask. product was selected by the Rebels in the third round, 47th overall in the 2014 WHL Bantam Draft.

“Carson has been a solid defensive guy, he’s going to provide us with depth,” Bruce Hamilton, Kelowna Rockets’ president and general manager said. “I felt that we needed to have another older guy on our blueline, he will be able to provide us with that.” 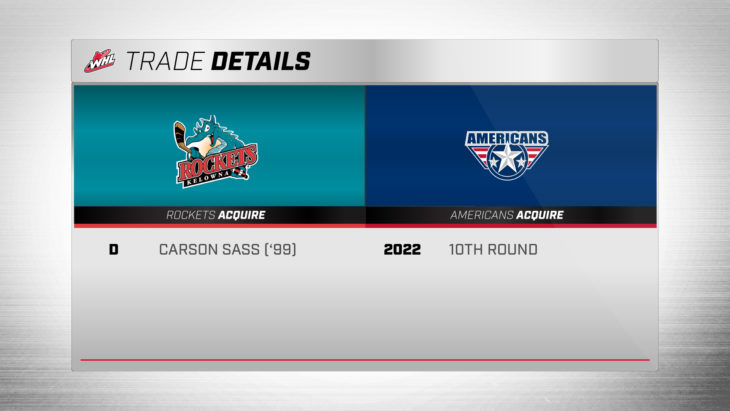 We have acquired defenceman Carson Sass from the @TCAmericans in exchange for a draft pick.

The Americans have traded defenseman Carson Sass to the Kelowna Rockets for a 10th round pick in the 2022 WHL Bantam Draft.