David Kope is the newest member of the Kelowna Rockets following a Monday trade with the Edmonton Oil Kings.

In exchange, the Oil Kings received a fourth-round selection in the 2023 Western Hockey League Bantam Draft.

The 19-year-old product of Edmonton, Alta. recorded 37 points (13G-24A) in 59 games during the 2019-20 WHL Regular Season, including three power-play goals and two game-winning goals. Kope’s season was highlighted by five multi-point games, including a three-assist performance on February 19, 2020.

“With Dillon Hamaliuk signed by the San Jose Sharks, we aren’t sure if he will be assigned back here for the upcoming season,” said Rockets President and General Manager Bruce Hamilton. “In order to add more depth, the opportunity to add another big body was there and we took advantage of it.”

“We are extremely thankful to David for all his hard work as a member of the Oil Kings, and wish him the best in his future hockey endeavours,” said Edmonton Oil Kings President of Hockey Operations and General Manager, Kirt Hill.

During the 2019 WHL Playoffs, Kope appeared in 16 games with the Oil Kings, recording five points (1G-4A). His lone goal came on the power play. 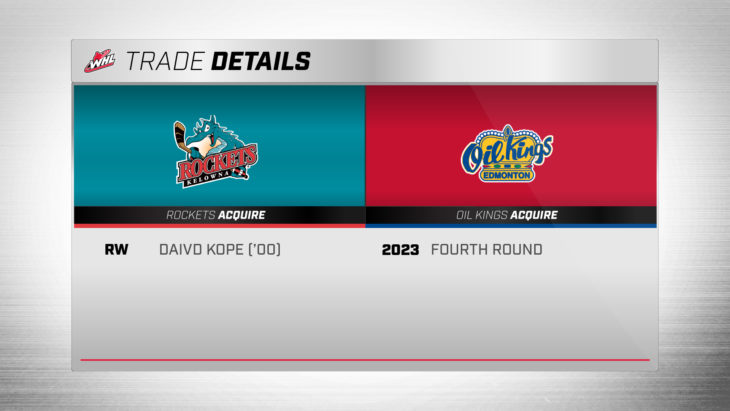 TRADE ALERT!
Your #OilKings have traded David Kope to the @Kelowna_Rockets in exchange for a 2023 4th round pick.
We want to thank David for all his contributions to the #OilKings.
Good luck in Kelowna, Koper! #heightandhands

The Kelowna Rockets have acquired forward David Kope from the Edmonton Oil Kings in exchange for the Rockets fourth-round pick in the 2023 WHL Bantam Draft.