Borysiuk was originally selected by the Rebels in the third round (63rd) of the 2017 WHL Bantam Draft. As for Saleski, he too came from the same 2017 bantam draft class, selected in the first round (17th) by the Prince Albert Raiders. As for Lalonde, he heard his name called in the sixth round (114th) at the 2019 WHL Bantam Draft.

Borysiuk – from Mannville, Alta. – has skated in nine career WHL contests (1-1–2), while Saleski – a product of Saskatoon – has dressed in 10 games (0-2–2). Lalonde hails from Aberdeen, Sask., and is currently with the Saskatoon Blazers of the Saskatchewan Midget Hockey League.

“We’re fortunate with this deal that we’re able to add two players to our lineup that can play big roles right away,” said Dean Brockman, Head Coach & Director of Hockey Operations for the Swift Current Broncos.

The Broncos return to action Friday night when they visit the Regina Pats at 7 p.m. ST. As for the Rebels, they will take to the ice at the SaskTel Centre in Saskatoon when they meet the Blades at 7 p.m. ST. 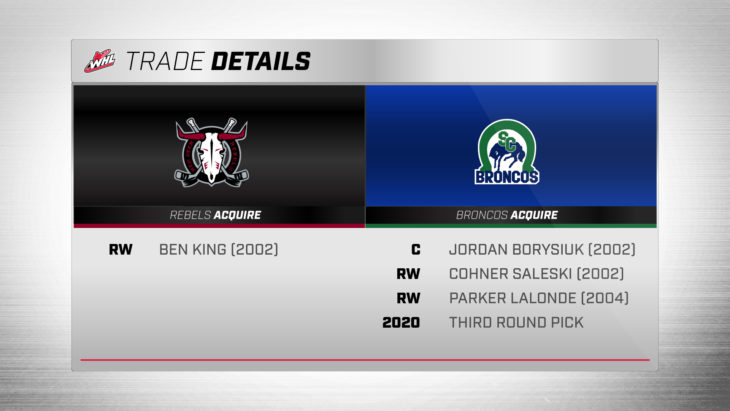