The Prince Albert Raiders have acquired 1999-born forward Brayden Watts from the Vancouver Giants in exchange for a fifth-round Western Hockey League Bantam Draft selection in 2021.

Originally selected by the Moose Jaw Warriors in the third round, 62nd overall, in the 2014 WHL Bantam Draft, Watts has appeared in 254 career WHL games. The Bakersfield, Calif. product was acquired by the Giants in a trade with Moose Jaw in January of 2017. Since then the 6-foot, 172-pound winger has suited up in 157 regular-season games with Vancouver.

“Brayden has been a first-class teammate, leader and ambassador for the Vancouver Giants,” said Barclay Parneta, Giants’ General Manager. “Brayden is truly leaving the Giants in a better place than when he arrived. He is a fantastic person that we were fortunate to be around and we wish him the very best as he continues his WHL career with the Prince Albert Raiders.” 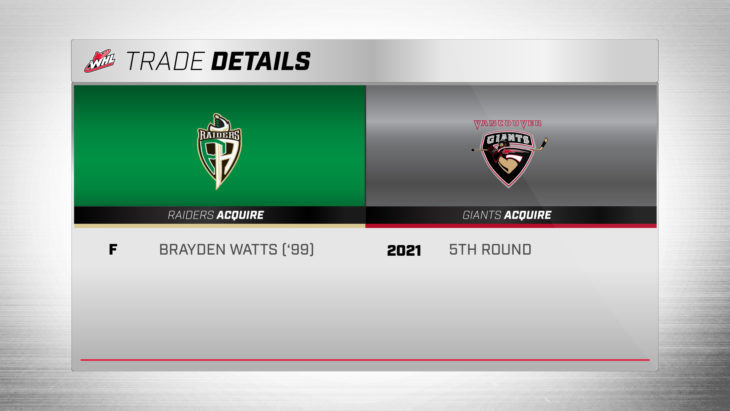