Owen Hardy is now a member of the Moose Jaw Warriors.

In return, the Giants received a conditional sixth-round selection in the 2022 or 2023 Western Hockey League Bantam Draft.

“Owen was a warrior for us. He battled hard for his teammates and set a standard for what being a Vancouver Giant is all about,” said Giants General Manager Barclay Parneta. “He brought leadership on and off the ice and is another player that has forever left his mark on the history of the Vancouver Giants.”

The 6-foot-1, 202-pound product of Nanaimo, B.C. was originally chosen by the Giants in the second round, 42nd overall, of the 2014 WHL Bantam Draft. Last season, Hardy posted 21 points (9G-12A) in 64 games, including one power-play goal and one game-winning goal. Hardy was a valuable piece of the Giants’ run in the 2019 WHL Playoffs, posting 12 points (5G-7A), including one game-winning goal, in 22 games. In three games this season, Hardy had a pair of assists with Vancouver.

“We are very pleased to add Owen to our hockey club.  Owen is a character guy who brings a tremendous amount of leadership and experience to our group,” said Warriors General Manager Alan Millar.  “He plays a complete, hard, power forward game. Along with Jadon Joseph, their playoff experience last year is a benefit to our club.”

Weekend action will keep the Warriors at home for their lone meeting when they host the Regina Pats at Mosaic Place on Sunday, October 6 (4:00 P.M. MT). 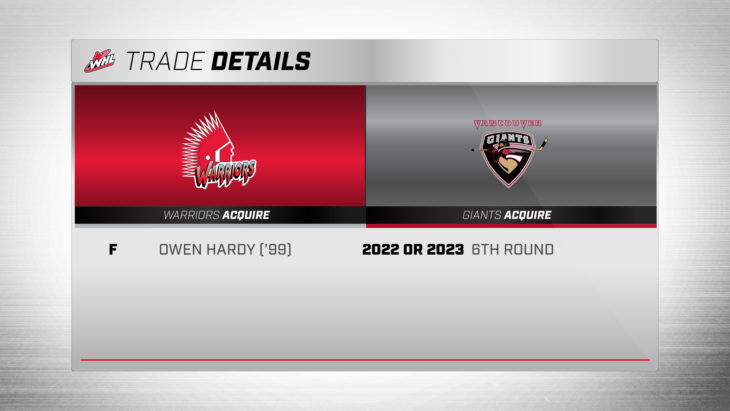 TRADE🔁: The Vancouver Giants have traded overage forward Owen Hardy to the @MJWARRIORS for a future 6th round draft pick.

TRADE: We have acquired 20-year-old forward Owen Hardy from Vancouver for a 6th round pick in 2023