The Winnipeg ICE and Regina Pats have agreed to a deal that sees goaltender Dean McNabb move to Manitoba’s capital. In exchange, the Pats will receive a seventh-round selection in the 2021 Western Hockey League Bantam Draft.

McNabb was originally selected in the third round, 61st overall, by the Victoria Royals in the 2015 WHL Bantam Draft. In the 2018-19 WHL Regular Season, McNabb played one game with the Victoria Royals before he was acquired by the Pats. At the end of his 29 games in the regular season, the 6-foot-1, 181-pound product of Davidson, Sask. earned an 8-16-0-1 record, a 4.17 goals-against average and a .876 save percentage. 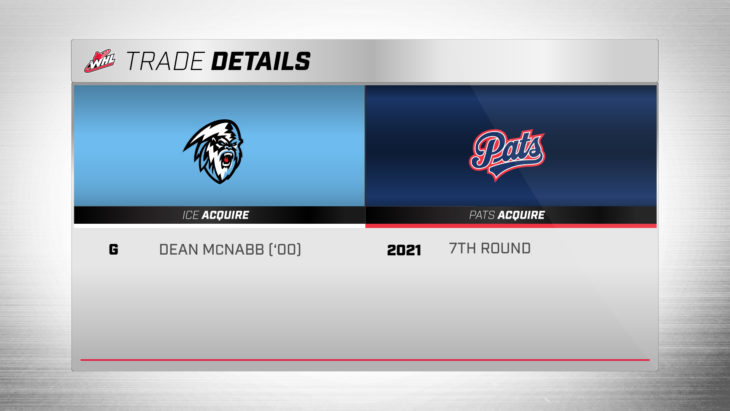 Prior to his WHL career, McNabb played two seasons with the Regina Pat AAA Canadians, winning a league title while also carrying out a league-best 1.67 GAA in the Saskatchewan Midget Hockey League (SMAAAHL) in the 2016-17 season. McNabb was also named a first team all-star in the SMAAHL during that season.

McNabb will join the ICE for their first regular-season game on Friday, September 20, (7:30 p.m. CT) at Westoba Place in Brandon, Man. as they take on the Brandon Wheat Kings.

BREAKING | The Winnipeg ICE have acquired 2000-born goaltender Dean McNabb from the @WHLPats.