Hurricanes strengthen defence with addition of Prowse from Royals

The Lethbridge Hurricanes and Victoria Royals have come together on a Friday trade, sending 19-year-old defenceman Mitchell Prowse to southern Alberta.

“We are really excited to add Prowse to our group for next season,” said Hurricanes General Manager Peter Anholt. “We feel this is a strong add and an important piece for us.”

For his WHL career, Prowse has appeared in 239 WHL regular season games, totalling 81 points (9G-72A), including one power-play goal and one game-winning goal. He’s also added eight points (1G-7A) in 23 WHL playoff games. At the 2015 WHL Bantam Draft, Prowse was chosen in the second round, 35th overall.

“Mitch has been an exceptional Victoria Royal, on and off the ice, and we thank him for his hard work and dedication over these past four seasons,” said Royals’ President and General Manager Cameron Hope. “It is not an easy decision to say goodbye to a player like Mitch. He and his family have been a part of our family since his WHL draft day. We wish him success in Lethbridge.”

In Dorrington, the Royals add an intriguing young forward to their team. Signed to a WHL Standard Player Agreement by the Hurricanes in August 2018, Dorrington appeared in 36 games during the 2019-20 WHL Regular Season, recording two points (1G-1A). The 6-foot-3, 180-pound forward is a product of Langley, B.C.

The 2020 WHL Bantam Draft will be held online this coming Wednesday, April 22, at WHL.ca/draft. 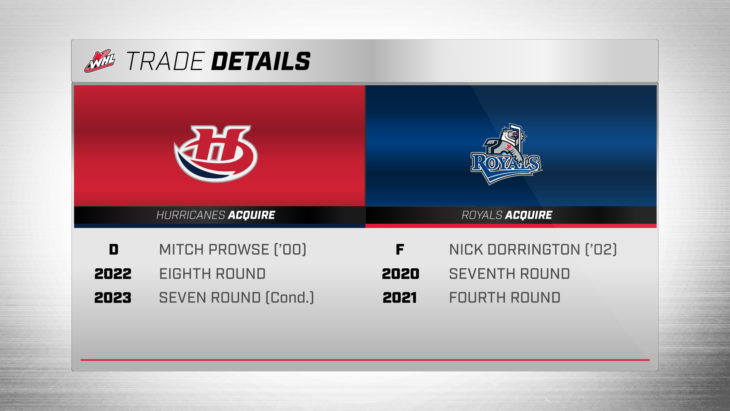