Hitmen acquire Gabruch from the Chiefs

In the second deal of the day for the Calgary Hitmen the team has acquired 18-year-old forward Connor Gabruch from the Spokane Chiefs in exchange for a fifth round pick at the 2020 Western Hockey League Bantam Draft.

Gabruch, the product of Saskatoon, Sask., has spent his last two seasons with the Chiefs, tallying 13 points (6G-7A) in 84 regular season games in the league.

The 6-foot-4, 190-pound right winger has notched seven points (3G-4A) in 36 games this season including one game-wing goal.

The right-shot forward prior to playing in the WHL spent one season in the Saskatchewan Midget AAA Hockey League (SMAAAHL) where he registered 30 points (14G-16A) in 44 regular season games for the Saskatoon Blazers.

The next game for the Hitmen is Friday, January 10 (7:00 pm MT) in a Central Division tilt against the Lethbridge Hurricanes. 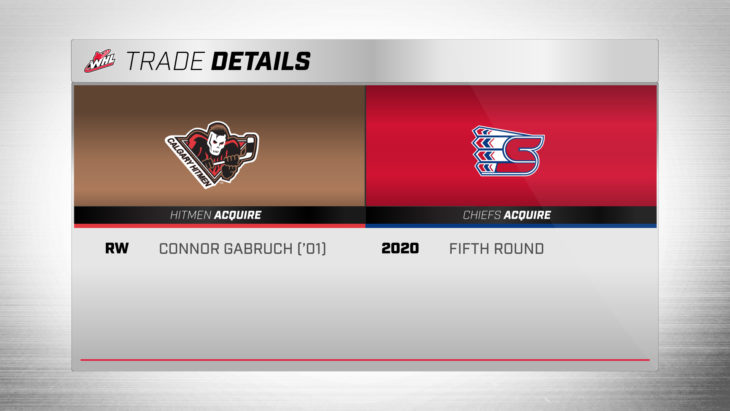 TRADE: Hitmen have acquired 18-year-old forward Connor Gabruch from the Spokane Chiefs in exchange for a fifth-round pick in the 2020 WHL Bantam Draft