Chiefs add to forward group with acquisition of Ginnell from ICE

Another former Portland Winterhawks forward is heading back to the U.S. Division.

“Brad is a versatile forward who can play anywhere in the lineup and in all situations,” said Spokane general manager Scott Carter. “He has the ability to score, is comfortable on the power play and brings a lot of WHL experience.”

Originally selected in the fifth round, 105th overall, of the 2015 WHL Bantam Draft by the Portland Winterhawks, Ginnell has appeared in 214 WHL regular season games for the Winterhawks and ICE, posting 87 points (40G-47A), including 14 power-play goals and two game-winning goals. In eight WHL playoff games, Ginnell has recorded three points (2G-1A).

“We would like to thank Brad for his contributions to the ICE organization and the great work he has done in the community, we wish him well in Spokane,” said ICE president and general manager Matt Cockell, President and General Manager.

The move follows an earlier deal where former Winterhawk forward Ty Kolle was also dealt from the East Division to the U.S. Division, heading to the Everett Silvertips.

The Chiefs return to action on home ice Friday, January 10 (7:05 p.m. PT) when they begin a home-and-home set against the Vancouver Giants. 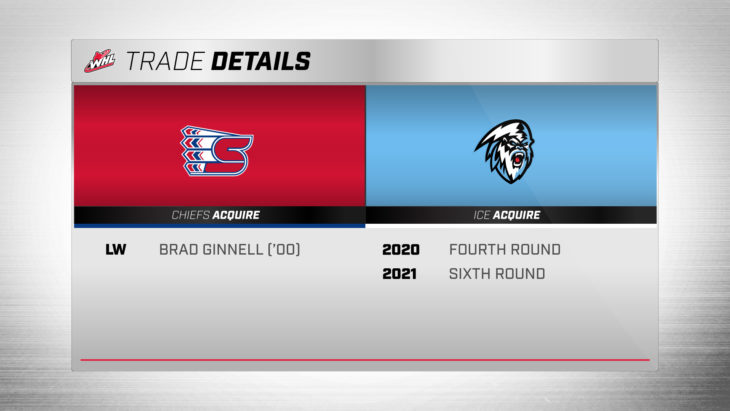 BREAKING | The Winnipeg ICE have acquired a 2020 4th round pick and 2021 6th round pick in the Western Hockey League Bantam Draft from the Spokane Chiefs.