Wood comes to the Broncos with 150 games of WHL regular season and playoffs experience with the Thunderbirds and Moose Jaw Warriors. The 6-foot-1, 182-pound product of Edmonton, Alta. was originally selected by the Warriors in the seventh round, 140th overall, of the 2015 WHL Bantam Draft.

“We appreciate Brecon’s time with the team,” said Thunderbirds General Manager Bil La Forge. “We wish him all the best in Swift Current. We’re excited to get a high-character prospect in Ashton and we will be watching his progress this season in midget.”

Heading to the Thunderbirds in the deal is McNelly, younger brother of current Thunderbird forward Cade McNelly.

The Broncos selected the younger McNelly in the 10th round, 216th overall, of the 2018 WHL Bantam Draft. 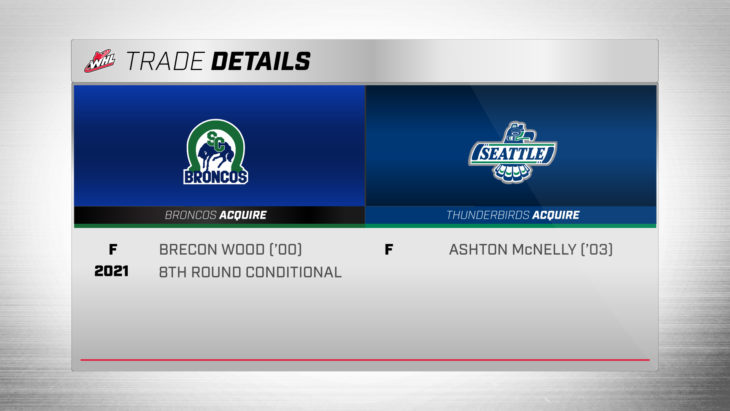 NEWS: The Broncos have acquired Brecon Wood (@breconwood91 2000, F) and a conditional 8th-round pick in 2021 from the @SeattleTbirds.