Of all the deals trading the present for the future, the Swift Current Broncos and Lethbridge Hurricanes may have just made the trade of the 2017-18 Western Hockey League season, significantly altering the paths of both clubs.

In return, the Hurricanes have acquired seven pieces to help their team for the remainder of the year and beyond, starting with goaltender Logan Flodell (1997), rookie forward Logan Barlage (2001), forward Owen Blocker (2000) and defenceman Matthew Stanley (1998). The Hurricanes have also received a first-round draft pick in the 2020 WHL Bantam Draft, a third-round pick in the same draft and a conditional second-round draft pick in the 2021 WHL Bantam Draft.

Skinner and Estephan represent Swift Current banking on both players to help carry them through the WHL’s East Division, arguably the best in Canada, for the remainder of the season and through a playoff run that they hope ends with them hoisting the 2018 Mastercard Memorial Cup in May.

The 1997-born Estephan is the other big piece to this deal for the Broncos. A 6-foot-0, 195-pound forward from Edmonton, Alta., he has recorded 58 points (18G-40A) in 39 games with the Hurricanes while serving as their captain. He’s recorded a multi-point game in 20 of his 39 games this year. Originally drafted by the Hurricanes in the first round, fourth overall, of the 2012 WHL Bantam Draft, the overage center has spent his entire WHL career in southern Alberta, recording 297 points (119G-178A) in 297 games with the Hurricanes. He has 39 career power-play goals, five short-handed goals and 13 game-winning goals.

“This was obviously a difficult trade to make, as you can imagine, but one we felt we had to do,” Hurricanes general manager Peter Anholt said. “To be able to get Barlage in the trade was the key to this move. He’s a big, young guy who has a lot of potential and we think he will be a real good player who will be an important piece to our now and future. And to get Flodell, Blocker and Stanley to help us now is important; plus the draft picks.”

Heading the other way to Lethbridge is a package that starts with overage goaltender Logan Flodell. Acquired from the Saskatoon Blades at the start of the season, Flodell was an important part of the Broncos success over the first half of the season. In 35 games with the Broncos this season, Flodell was 24-8-3-0 with a 3.07 goals against average, .913 SV% and three shutouts. The 5-foot-11, 170-pound netminder from Regina, Sask. was drafted by the Seattle Thunderbirds in the third round, 47th overall, of the 2012 WHL Bantam Draft. In 135 career WHL games, Flodell has compiled a 72-43-11-1 record, 2.87 goals against average and a .909 SV%. He also has nine shutouts to his name.

Flodell’s 24 wins ranked him second in the league this year, behind only Brody Willms from the Moose Jaw Warriors.

Barlage is the other big add for the Hurricanes, who secure a strong forward for future years. the 6-foot-4, 201-pound forward from Humboldt, Sask. was selected fourth-overall by Swift Current in the 2016 WHL Bantam Draft. In 42 career WHL games with Swift Current, Barlage has seven points (1G-6A) in the start of what is expected to be a promising WHL career.

Owen Blocker, a 6-foot-1, 190-pound forward from Oakbank, Man. was selected in the second round, 32nd overall, of the the 2015 WHL Bantam Draft. In 71 WHL games with the Broncos, Blocker has two points (1G-1A), but should get more opportunity to develop on a team like the Hurricanes. His first career WHL goal also counted as a game-winning goal back in a December 2017 game against the Kamloops Blazers.

Matthew Stanley is the fourth and final player headed from Saskatchewan to Alberta in the deal. The 6-foot-1, 177-pound left-shot defenceman is a product of Balmoral, Man. and was selected by the Broncos in the 12th round, 248th overall, of the 2013 WHL Bantam Draft. In 91 career WHL games, the 1998-born defenceman has five assists. He also has 14 games of WHL playoff experience to bring to the Hurricanes.

Anholt said in a Tuesday press conference that all four of the players headed from the Broncos to the Hurricanes were expected to be in the team’s lineup for Tuesday’s game against the Red Deer Rebels. Puck drop is scheduled for 7:00 p.m. MST. The Broncos are next in action Friday, January 12 (7:00 p.m. CST), facing the Prince Albert Raiders at the Art Hauser Centre.

TRADE: #WHLCanes acquire Logan Barlage, Logan Flodell, Owen Blocker, Matthew Stanley, a 1st in 2020, a 3rd in 2020 and a conditional 2nd in 2021 from the @SCBroncos for Tanner Nagel, Giorgio Estephan and Stuart Skinner. #CaneTrain #YQL 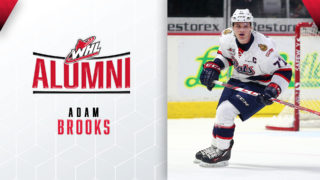 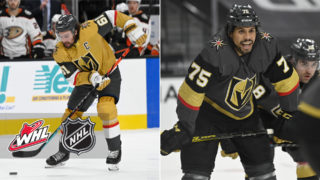 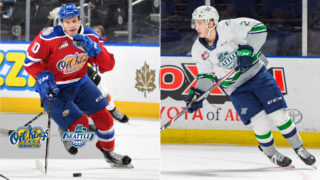 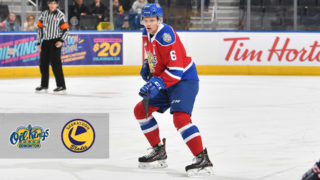