The Kamloops Blazers and Moose Jaw Warriors have agreed to a swap of import players prior to Friday’s WHL Trade Deadline.

Defenceman Libor Zabransky is heading to the division-leading Blazers while the Warriors have acquired forward Martin Lang, addressing specific needs for each of the teams.

In Zabransky, the Blazers have added key 19-year-old depth to their blue line as they prepare for a strong run. With a Warriors team that appears to be geared toward the future, the addition of the 18-year-old Lang brings in a key young forward who has displayed strong scoring potential in the league.

Adding to the Blazers’ blue line, Zabransky is a key get the Blazer organization. The 6-foot-1, 197-pound product of Brno, Czech Republic has posted 11 points (2G-9A), including one power-play goal and one game-winning goal, in 29 games between the Warriors and Saskatoon Blades.

Zabransky was selected 51st overall by the Kelowna Rockets in the 2017 Canadian Hockey League Import Draft and later re-drafted 55th overall by the Blades in the 2019 CHL Import Draft. In 136 WHL regular season games, Zabransky has posted 39 points (6G-33A), including one power-play goal and two game-winning goals. He has also appeared in four WHL playoff games with the Rockets during the 2018 WHL Playoffs.

Recently, Zabransky captained his home country as they hosted the 2020 IIHF World Junior Championship. He was named one of the top three players for his country at the tournament and scored four goals in five games to lead all defencemen.

“We are excited about the addition of Libor to our group,” commented General Manager Matt Bardsley. “He was recently the captain of the Czech Republic national junior team and had a great performance at the World Junior tournament. With only six defensemen on our roster, we felt it was important to add a defenceman to our team.”

Heading the other way in the deal is the younger Lang. A 5-foot-10, 175-pound product of Rokycany, Czech Republic, Lang has good potential in the short and long term.

This season, the winger has tallied 19 points (7G-12A) in 31 games with the Blazers. His totals include a power-play goal and a game-winning goal.

In 97 WHL regular season games for his career, Lang has tallied 52 points (18G-34A), including three power-play goals and one game-winning goal. He’s added four points (1G-3A) in six WHL playoff games with his single goal coming on the power play. 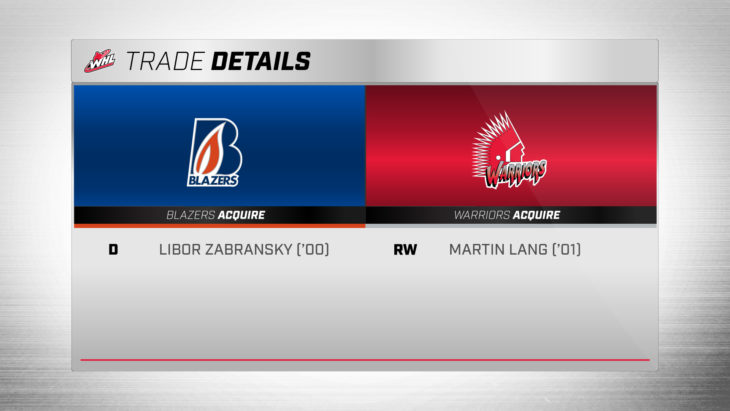 BREAKING: In addition, we have acquired 18-year-old import Martin Lang (RW) from Kamloops for Libor Zabransky