“On behalf of the WHL and our member Clubs, I would like to extend our congratulations to Don Hay on becoming the winningest coach in WHL history,” commented WHL Commissioner Ron Robison. “Setting a record of this kind is not only a remarkable achievement but serves to highlight what an incredible career Don has had to this point and the success his teams have enjoyed under his leadership.”

During the 2016-17 WHL Regular Season, Hay became only the second coach in WHL history to reach the 700-win plateau. He entered the 2017-18 WHL Regular Season with 720 wins to his name, needing 23 to establish a new WHL record.

Hay’s success in the WHL and Canadian Hockey League has gone unparalleled. He has been behind the bench for three Mastercard Memorial Cup titles as head coach (1994, 1995, 2007) and another as an assistant coach (1992). He crafted WHL Championship teams on three occasions (1994, 1995, 2006) and was also on staff as an assistant coach for the Kamloops Blazers WHL Championship run in 1992.

Under Hay’s direction, the Vancouver Giants made back-to-back appearances in the WHL Championship (2006 and 2007), lifting the Ed Chynoweth Cup with a 4-0 sweep of the Moose Jaw Warriors in 2006. He was also presented with the Dunc McCallum Memorial Trophy as WHL Coach of the Year during the 2008-09 WHL season, leading the Giants to a record of 57-10-2-3.

Hay’s time with the Tri-City Americans was highlighted with hardware, as he was recognized as the WHL Coach of the Year and WHL Executive of the Year during the 1998-99 season.

Outside the WHL, Hay has experienced tremendous success on the international stage, having coached Canada to gold medal performances at the 1995 IIHF World Junior Championship and 2013 IIHF U-18 World Championship. His travels also extended to the professional ranks, where he spent four seasons (1995-96 to 1997-98, 2000-01) in the National Hockey League between the Calgary Flames, Arizona Coyotes and Anaheim Ducks, as well as three seasons (2001-02 to 2003-04) in the American Hockey League with the Utah Grizzlies. 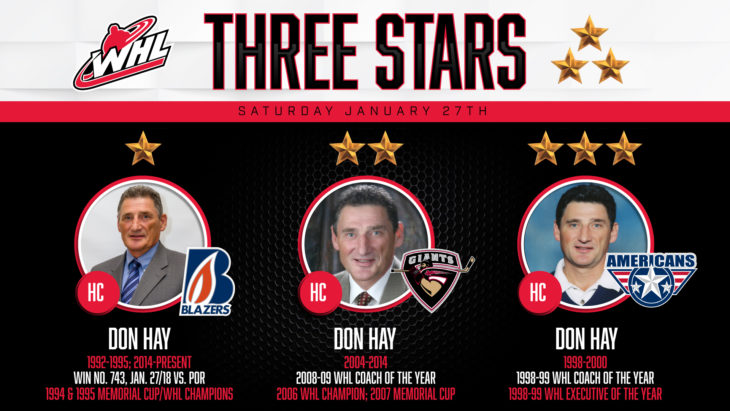