The Saskatoon Blades have struck a trade with the Edmonton Oil Kings, acquiring 2000-born defenceman Wyatt McLeod in exchange for a conditional draft pick in 2022.

“Wyatt brings a great deal of leadership and playoff experience to our program,” said Blades General Manager Colin Priestner. “In what will surely be an unprecedented season for us, we felt having Wyatt on our back end would be very beneficial to help manage the ups and downs this season may bring, and to help mentor our group of young defenceman.”

McLeod, who turns 21 on January 27, has spent his entire four-year WHL career in Edmonton, suiting up in 204 games and recording 54 career points (9G-45A). A two-year assistant captain for the Oil Kings, McLeod has also racked up 146 career penalty minutes and a plus-minus rating of +28.

The Dawson Creek, BC product’s most impressive contributions have come over the last two years, where he’s collected a combined 40 points (7G-33A) with a +36 rating. Last season, McLeod set new career-highs in points (21) and assists (18). He also posted the highest plus-minus rating of any Oil Kings defenceman at +19.

“The Oil Kings organization would like to thank Wyatt for his contribution both on and off the ice,” said Kirt Hill, Oil Kings President of Hockey Operations and General Manager. “Wyatt represented the Oil Kings with class and was a major part of our defensive corps over the course of his career. We wish him nothing but success in Saskatoon and his future hockey journey.” 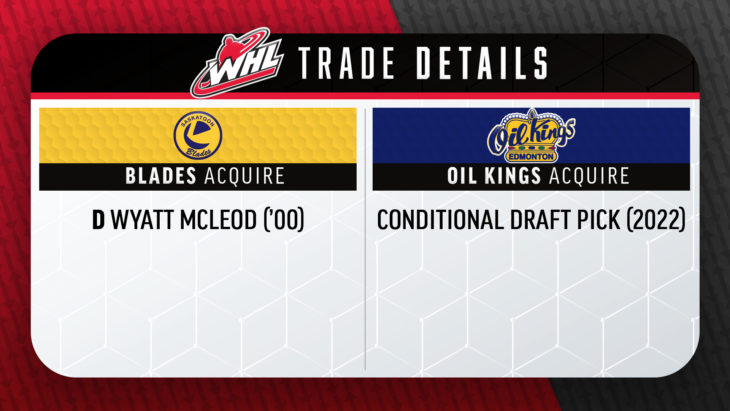 McLeod fills a large hole on the Blades blue-line following the departure of veteran defenceman Nolan Kneen and Scott Walford, who both graduated from junior hockey last season. McLeod also has experience training at the NHL level, having been invited to Colorado Avalanche rookie camp prior to the 2019-20 season, and Pittsburgh Penguins rookie camp ahead of the 2018-19 campaign.

“Our associate coach Ryan Marsh worked closely with Wyatt in Edmonton for two seasons and always spoke highly of his character and abilities,” Priestner said. “It should be an easy transition for him to join our culture as a 20-year-old.”

In addition to McLeod’s acquisition, and due to the uncertainty of the COVID-19 pandemic, the Saskatoon Blades are also announcing import players Martin Fasko-Rudas and Radek Kucerik will not be returning to the team for the 2020-21 season.

“Given the circumstances related to COVID-19 and the international border situation, we have made the mutual decision to keep both Radek Kucerik and Martin Fasko-Rudas in Europe to continue their seasons playing professionally there,” added Priestner. “They are both in good situations and we want to sincerely wish them the best as they finish their seasons in Europe.”

Fasko-Rudas, a pending overage forward, was acquired by the Blades in a deadline deal with the Swift Current Broncos last January. The Slovakian winger recorded 18 points (10G-8A) in 23 regular-season games with the Blades. The majority of Fasko-Rudas’s career was spent with the Everett Silvertips, who drafted him in the 1st round (58th overall) in the 2017 CHL Import Draft. In 170 career WHL games, he’s picked up 72 points (35G-37A), 66 penalty minutes, and a +25 rating.

2001-born defenceman Kucerik was selected by the Blades in the 2nd round (115th overall) in the 2019 CHL Import Draft. In his rookie campaign, the lumbering blue-liner chalked up 13 points (3G-10A) and 18 penalty minutes in a COVID-shortened 49 games.

On loan by the Blades until it’s appropriate for him to return, Kucerik has spent the majority of this season playing for HC Prerov in Czech Republic’s tier-two professional league. In 14 regular-season games, the 19-year-old has potted three assists and added 12 penalty minutes.

With these moves, the Blades retain the rights to 2003-born import pick Brad Lambert, along with Kucerik, and intend to welcome Kucerik back to Saskatoon for the start of the 2021-22 regular season. The Blades would also like to thank Martin for his contributions to the organization, and for representing the club to the highest standard during his time in Saskatoon.

We've acquired 2000-born defenceman Wyatt McLeod from the @EdmOilKings in exchange for a cond. draft pick in 2022.