As the 2019-20 Western Hockey League’s regular season approaches, two teams will be previewed each day leading up to the start of the regular season, Friday Sept. 20. Team capsules are presented in order of 2018-19 finish within their own division. Today, we take a look at the East Division’s Winnipeg ICE.

Forwards: As far as off-seasons go, the Winnipeg ICE were right up there among the best in terms of improvements to their forward core. At the 2019 WHL Bantam Draft, they added two 15-year-old talents in Matthew Savoie and Conor Geekie with the first two selections, ensuring the team will have two core pieces in the team’s long term.

They then added Tri-City Americans overage forward Isaac Johnson via trade and proceeded to select Chicago Blackhawks prospect Michal Teply as well as German forward Nino Kinder at the 2019 Canadian Hockey League Import Draft. Add this onto a forward core led by captain and Vegas Golden Knights prospect Peyton Krebs, once he returns from his injury, as well as a blooming offensive star in Connor McClennon and you have a top six that’s ready to rival all challengers.

“We’ll be without Peyton Krebs to start the year, but that’ll be a great opportunity for our pool of younger players to fill those minutes,” Cockell said. “Michal Teply [and] Nino Kinder will have big roles in our team.”

It remains to be seen what sort of contributions Savoie and or Geekie will be able to have as 15-year-olds at the WHL level, but their eventual debuts will no doubt draw plenty of intrigue given what they’ve been able to accomplish offensively to date in minor hockey as well as in the Canadian Sport School Hockey League.

“At the same time there’s certainly no rush,” Cockell said of the pair’s development. “They’re both 15 years of age. As we’re able to work with them, we’ll continue to assist with them this year and certainly moving forward they’ll be a big part of our team.”

Johnson is a quality overage add for the ICE’s core, even if just for the one season. The Andover, Minn. native had 32 points (12G-20A) in 31 games with the Tri-City Americans last season to follow up a rookie campaign that saw him post 48 points (17G-31A) in 68 games while also being a valuable part of the Americans’ run in the 2018 WHL Playoffs.

This will create healthy competition in the team’s top nine spots with the likes of Brad Ginnell, who is coming off a 41-point (16G-25A) season, as well as Jakin Smallwood, who posted 30 points (13G-17A) last season, clamouring for larger roles with the ICE. Manitoban product Cole Muir is also coming off a breakout season that saw him record 27 points (11G-16A) in 68 games last season with the ICE and could be a valuable offensive piece moving forward.

“Smallwood is a player for us that is a 200-foot player and real honest two-way game,” Cockell said.

For a team that slipped below the 200 mark for goals for last season and ranked 19th overall on the power play, Cockell has made it a priority and successfully executed the need to add an extra offensive element to the team. 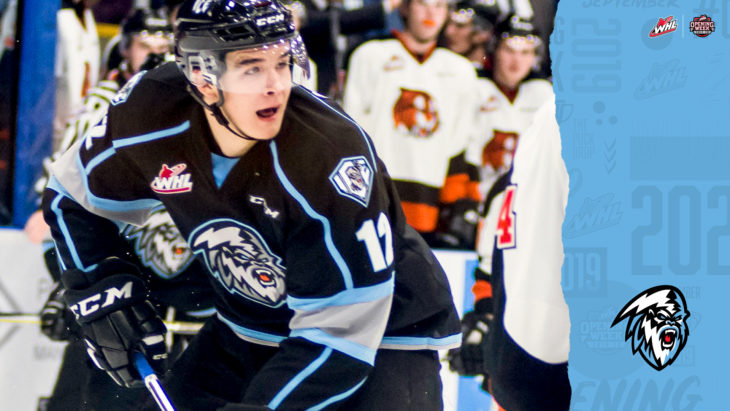 Defence: While Cockell was busy acquiring talent up front, he was sure to take care of talent on the blue line as well.

The move that saw the ICE acquire the second-overall selection in the 2019 WHL Bantam Draft also saw them acquire WHL Champion Reece Harsch from the Saskatoon Blades. Harsch was in his rookie season when the Thunderbirds made their drive to capture the Ed Chynoweth Cup, but he still appeared in 67 regular season games as well as all 20 games during the 2017 WHL Playoffs. To date, he’s appeared in more than 200 WHL regular season and playoff games combined and is a solid addition to help the ICE return to the playoffs in 2020.

Winnipeg fans will also get to delight in cheering on hometown product Carson Lambos, who is set to make his full-time debut this fall after being selected second overall at the 2018 WHL Bantam Draft. A milestone moment from last season saw him score the first goal of his WHL career against the Brandon Wheat Kings. He’ll be a welcomed addition to the team’s blue line.

Add in an experienced defenceman like Chase Hartje and Marco Creta and there’s healthy competition for the remaining spots. Make no mistake though, the team’s emerging young talent also have their eye on those spots.

“Anson McMaster and Ben Zloty are two younger players that we certainly will be looking to make our team,” Cockell said. “Then there’s some real competition in our backend with some veteran players.

“That’ll be something that plays out here over the next little bit.” 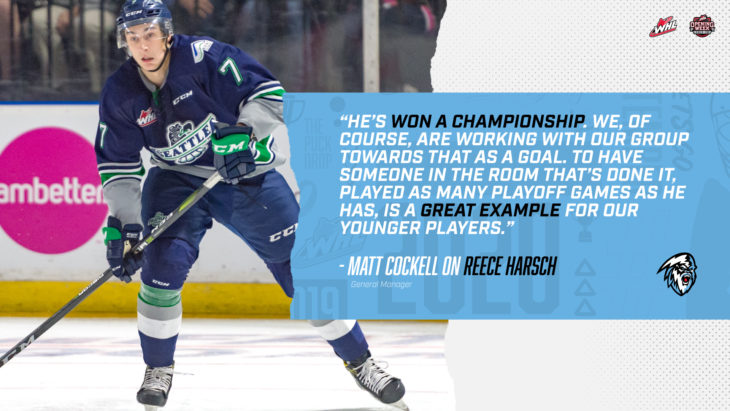 Goal: Sitting on the outside of a week until the regular season starts, the ICE still have five goaltenders on their roster, though it’s not by choice. Illness and injury have deprived the team of goaltenders Jesse Makaj, Duncan McGovern, and Gage Alexander for the time being. That has put the responsibility of filling the crease on 2017 draft choice Will Gurski and 2019 draft pick Daniel Hauser for pre-season play.

“Will Gurski, a prospect we’re really excited about, he’s going to for now carry the load and when we get those other guys back there will certainly be some competition in net,” Cockell said.

The starting job likely belongs to Makaj or McGovern once healthy due to seniority, but it can’t hurt to give experience to the team’s goaltending pipeline before the games begin to count on Friday, September 20.

Since Payton Lee appeared in 53 games during the 2016-17 WHL Regular Season, no ICE goaltender has appeared in 40 or more games in a single season, though Makaj came close to that figure, making 39 appearances last season. With no definitive starter, the ICE could benefit from another platoon between Makaj and McGovern, giving each the opportunity to see if one rises to the occasion. 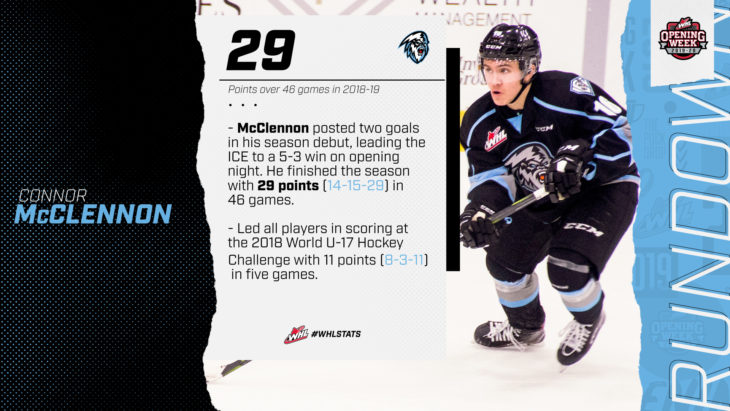 Player to watch: As far as season debuts go, Connor McClennon had one to remember in 2018. The Wainwright, Alta. product scored a pair of goals, including the game-winning goal, to help deliver the ICE a 5-3 victory against the rival Calgary Hitmen. McClennon would finish his rookie season with 29 points (14G-15A) in 46 games.

He also had an electrifying performance at the 2018 World Under-17 Hockey Challenge where he led all players in scoring with 11 points (8G-3A) in five games. He gained further international experience over the summer at the 2019 Hlinka Gretzky Cup, earning a silver medal. Those experiences have Cockell counting on McClennon to take a big step forward, especially with the looming 2020 NHL Draft.

“When you look at players like Connor McClennon and Carson Lambos, those are players that are going to be a big part of not just our team today, but our future,” Cockell said. “There’s a lot of growth and development and work that needs to go in to take it a step forward.”

It’d be unfair to set specific benchmarks, even at this point in September, due to unknowns with the ICE’s final roster makeup. However, the ICE and their fans know they’ll get the absolute best from McClennon for each game he’s in and is a part of the team to build around for years to come. 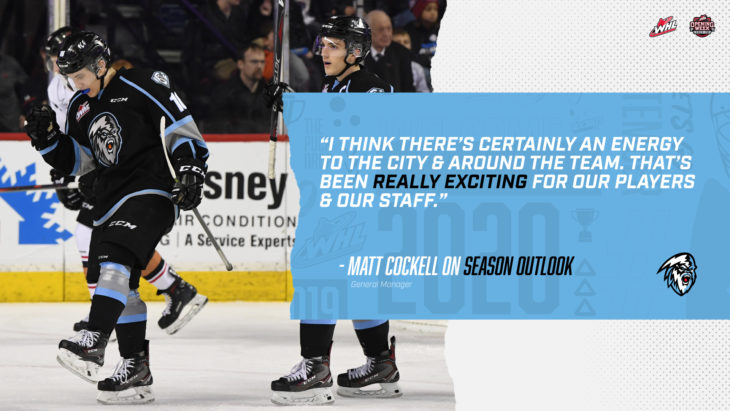 Prognosis: After four years on the outside of the WHL Playoffs, the ICE appear poised to make a strong case for their return this season.

Right now, the team looks great on paper. If they gel properly, the talented group could easily challenge for a playoff spot in the East Division or one of the available wild card spots. The only potential hiccup at the moment appears to be determining the amount of time that Krebs misses to start the regular season and how quickly he’s able to return to the form we know once he does suit up.

“We really couldn’t ask for anything more in terms of what we’ve been able to surround our players with in addition of course to the new training facility,” Cockell said of the atmosphere in Winnipeg.

There is a reason for optimism in the WHL’s return to Winnipeg, with local talents in the likes of Lambos, McGovern, Skyler Bruce, and others from Manitoba looking to continue their province’s rich hockey history.

However, teams like the Wheat Kings won’t easily relent control of the East Division to just anyone though. The ICE are in for another challenging season, but have the tools in the present and short-term future that can make them contenders for years to come.