As the 2019-20 Western Hockey League’s regular season approaches, two teams will be previewed each day leading up to the start of the regular season, Friday Sept. 20. Team capsules are presented in order of 2018-19 finish within their own division. Today, we take a look at the B.C. Division’s Vancouver Giants. 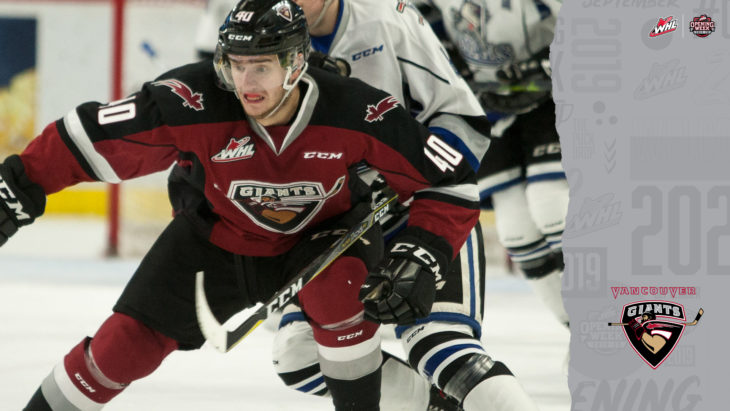 Forwards: While the Vancouver Giants are in a bind for one part of their forward group, they’re enjoying the benefits of other parts, creating a healthy mix that should once again pose challenges for opposition throughout the league.

Delivering the bad news first, the Giants’ overage situation remains murky as of Tuesday. Milos Roman, Brayden Watts, and Owen Hardy represented three key members of the Giants’ offence last season, but with five total 20-year-olds on their roster, it’s clear at least two of the group will have go soon enough.

Sent back to the Giants from Calgary Flames camp Tuesday, Roman will be a solid returnee in both an import and 20-year-old spot for the Giants. The Slovakian center posted 60 points (27G-33A) in 59 games last season, adding another 12 points (4G-8A) in the 2019 WHL Playoffs.

That leads the trio of overage forwards in terms of offensive contributions, but the final decision will provide great clarity on the team’s composition.

The good news is that the team’s younger talent is ready to step up, namely in that of second-year forward Justin Sourdif. Leading all B.C. Division rookies in goals and points was a perfect way to spend his first full season in the league. Now, the challenge becomes building off that, a part of the team’s forward composition that Giants General Manager Barclay Parneta is looking forward to.

“Justin [Sourdif] is an incredible player, was fortunate enough to compete for Canada at the Hlinka Gretzky Cup,” Parneta said. “He brought that experience back. He’s much more mature and [that] experience really went a long way.”

Sourdif was the team’s top selection at the 2017 WHL Bantam Draft and won’t be alone from that draft’s group this season. In addition to defenceman Tanner Brown, winger Cole Shepard signed a WHL Standard Player Agreement with the Giants in July. Playing with the Penticton Vees of the British Columbia Hockey League (BCHL) last season, Shepard had 24 points (7G-17A) in 53 games.

“It helps us build with a kid who that has played a year of junior so the transition is a little easier than maybe stepping out of Midget [AAA],” Parneta said.

The West Vancouver, B.C. product will be reunited with his 19-year-old brother Jackson, an off-season acquisition from the Lethbridge Hurricanes in May.

“We acquired Jack because he fits into our scheme, our on-your toes, fast, finish-your-hits aggressive style of play,” Parneta said. “Jack is another character kid that I’ve watched through the bantam leagues. He has a really big upside and will fit in well here.”

Having gotten the chance to see the younger Shepard as well through events like the 2017 WHL Cup, where Shepard won gold, and the 2017 World Under-17 Hockey Challenge, he has high hopes for the team’s younger talent moving forward.

“The balance of our group up front is really spread out,” said Parneta. “We have a really good group of forwards here that is going to spread the scoring out. We know we’re not just going to have to rely on one or two people to do this, particularly with some of these additions.

“It takes the pressure off those guys.”

In addition to the Shepard brothers, the Giants have more homegrown talent in Tristen Nielsen. Posting 35 points (14G-21A) in 53 regular season games following an early-season trade from the Calgary Hitmen, Nielsen will be looking to take a step in a positive direction as well. 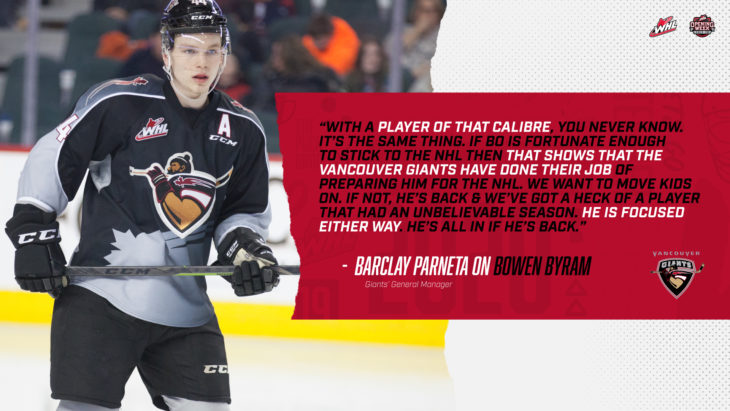 Defence: This time of year presents an awkward time for WHL teams with high-end talent while NHL teams make their final roster deliberations. In the case of Bowen Byram, the Colorado Avalanche, and the Giants’ blue line, they know exactly where they stand, sort of.

The CHL’s leader in goals by a defenceman last season posted 71 points (26G-45A) in 67 games while setting a WHL regular season record for most overtime goals in a single season. He later became the first WHL defenceman to lead a single WHL Playoffs in scoring with 26 points (8G-18A) in 22 games.

“He’s really remarkable,” Parneta said. “If we get an opportunity to work with him back here, it’s great for our team.”

Outside of Byram, the Giants still return key pieces of their blue line that will help them in the coming season.

In the absence of Byram, overage defenceman Dylan Plouffe should provide stability for the team’s younger defenders to develop further while being an offensive leader as well.

Selected by the Washington Capitals at the 2018 NHL Draft, Alex Kannok Leipert was a reliable part of the team’s defence while accounting for moderate offensive contributions. He showed more of his offensive capabilities in the 2019 WHL Playoffs, posting 12 points (2G-10A) in 22 games. He accomplished that while having four and five-game point streaks throughout the spring.

Two of the team’s other 2000-born defenders in Kaleb Bulych and Seth Bafaro will also be looked to. Combined, the pair bring nearly 300 games of WHL regular season experience to the Giants’ blue line and provide more experience in the team’s depth.

“I feel good about the backend just with four guys returning right off the hop,” Parneta said. “That’s really a nice feeling for me.”

If Byram is to return, the Giants will have returned the same lineup of regulars to their blue line minus the 1998-born Dallas Hines. After allowing a division low 162 goals last season, that spells trouble for the Giants’ four other divisional opponents and the other teams throughout the league.

Goal: Last season, the Giants boasted one the strongest goaltending tandems in the league with David Tendeck and Trent Miner. Now, the Giants are faced with a conundrum as part of their overage situation.

Alternating the two led them to the best record in the Western Conference and ultimately brought them within a goal of hoisting the Ed Chynoweth Cup. That’s a situation 20 other teams would glad put themselves into in a heartbeat.

“That’s going to have to be something we’re going to assess as we move through the pre-season and the start of the season,” Parneta said. “They’re both very capable goalies and obviously it worked extremely well for us last year. We’ll just have to see how that goes.”

Now that both are officially NHL prospects, both will want to shine in the spotlight and carry the bulk of the starts for a team that is expected to contend among the best.

With Tendeck heading into his final season of eligibility for junior hockey, and Miner having turn 18-years-old this calendar year, the team is set in the net for the short and long term, whatever they decide.

Beyond that, things look promising as well with Braedy Euerby and Drew Sim earning extended pre-season action while both Tendeck and Miner remain at NHL camps. 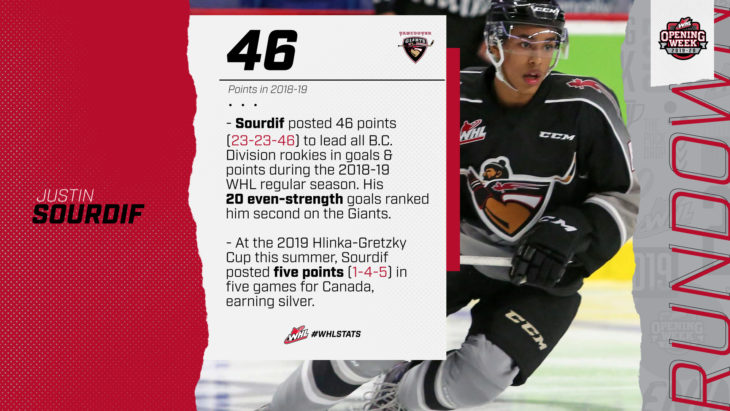 Brayden Tracey was selected in the first round of the 2019 NHL Draft while Adam Beckman was chosen in the third round. The player that completes that trio is Justin Sourdif, a rising talent on the 2020 NHL Draft landscape.

Despite his 5-foot-11, 163-pound frame, Sourdif has shown himself capable of physically establishing himself in front of the net to earn his scoring opportunities. On other chances, his wicked release caused headaches for opposing goaltenders all season.

With his draft stock rising and the off-season departure of leading scorer Davis Koch, the Giants will be looking to their younger talent to fill in the gap.

As the Giants pressed for first place in the conference in February and March of last season, Sourdif led the team in goals and his 24 points (11G-13A) was tied for second in team scoring with Byram. That sort of performance is exactly what the Giants will need this coming season.

Sourdif also had himself an eventful summer, posting five points (1G-4A) at the 2019 Hlinka Gretzky Cup as Canada earned silver.

Watch for him to be a game-changing part of the Giants’ offence this year and down the road. 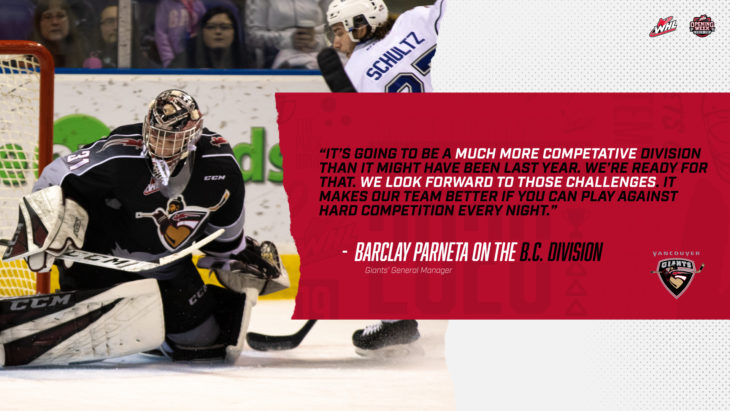 Prognosis: There’s no beating around the bush; coming within a goal of winning the Ed Chynoweth Cup stings.

“The boys have come back and they want to get through that; that one more goal, one more win,” said Parneta. “They’re coming back with great attitudes here.

“They’re ready to try to do the same thing again, but with a better result at the end.”

The Giants backed up their status as the Western Conference’s top team throughout the 2019 WHL Playoffs and nearly pulled off the comeback of a lifetime against the Prince Albert Raiders after facing a 3-1 hole in the best-of-seven series.

Losing Koch to the team’s forward group is a big hit, but Parneta has done well to keep them humming up front. Having Roman and Sourdif leading last year’s group has the Giants ready to contend offensively again. Add in a highly-touted forward in Cole Shepard and his brother Jackson and you’ve got the makings of another brilliant group. The addition of import forward Sergei Alkhimov to the team’s lineup will also provide another element to the team’s middle-six forwards.

On the blue line, the big question looms with the status of Byram. His return would only solidify the team’s chances as championship contenders. However, Parneta isn’t banking on anything yet.

“We’ve just got to be humble and hungry,” Parneta said. “Nothing is given; we’ve got to go out and perform.

“This year, teams know certainly what to expect from us. They’re going to be a little more prepared when we face them. There’s a lot of good teams in the WHL and it’s a long season. We just keep preparing like we did last year. We’re on a mission and we just want to be relentless.”

Michael Dyck’s return behind the bench in the WHL proved to be a perfect fit with the Giants, culminating in Dyck being named the Western Conference Coach of the Year. Another source of strength on the team’s roster, Parneta explained that he was very confident in Dyck and his coaching staff to keep the team prepared and focused for the task ahead throughout the season.

One thing that will change is the competitiveness of the division. The Kelowna Rockets and Kamloops Blazers are also on the rise while the Victoria Royals and Prince George Cougars will be looking to keep pace in the division. One thing is for sure, the Giants don’t and shouldn’t expect to win the division by 29 points again this season.

With more additions than subtractions, it may take a while to figure out how the parts fit together, but the Giants are confident of where it will lead them once they’re put together.