As the 2019-20 Western Hockey League’s regular season approaches, two teams will be previewed each day leading up to the start of the regular season, Friday, Sept. 20. Team capsules are presented in order of 2018-19 finish within their own division. Today, we take a look at the U.S. Division’s Tri-City Americans.

Forwards: Continuing with their developmental plan after losing seven players to various pro leagues in 2018, sees Tri-City in their second year of regrowth. While there’s still plenty of room for development with their relatively younger squad, the core group of forwards will take a bigger role on the American’s roster with two years of experience under their belts.

After two seasons with the Americans and his recent draft selection by the ColoradoAvalanche in the fifth round, 140th overall at the 2019 NHL Draft, Sasha Mutala will be one of those players stepping into a key role for the offensive squad. Last season Mutala recorded 41 points (20G-21A) and will look to increase his offensive output to match that of other 2019 NHL Drafted forwards. 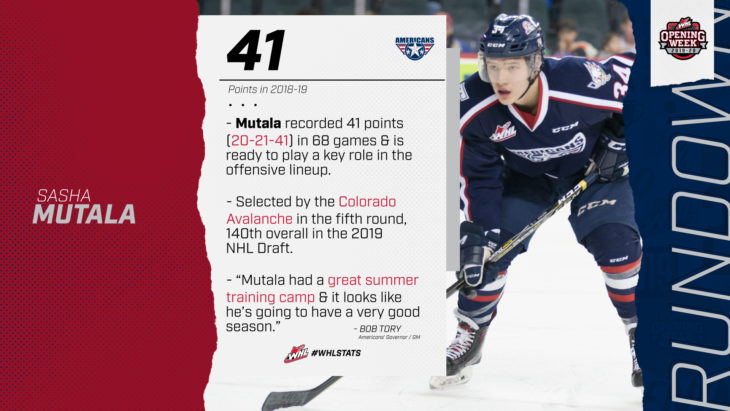 Americans’ second overall point producer, Kyle Olson excelled as a 19-year-old on the team, but now has big boots to fill with Parker AuCoin graduating. Supporting Olson up front will be Connor Bouchard, Samuel Huo and Paycen Bjorklund. With only a handful of other 2001-born forwards on the team, the majority of the roster is comprised of 2002 and 2003-born forwards, leaving the last two offensive lines to be on the younger, less experienced side.

“Certainly we feel that our over-agers are the strength of our team with Hrabik, Olson and Warm,” Tory said. “Mutala had a great summer training camp and it looks like he’s going to have a very good season after a good pick by Colorado, but we have some good scoring up front. As you go down a couple more guys, we’re looking at Connor Bouchard and Sam Huo and Paycen Bjorklund to have break-out seasons and as having pretty good depth up front.”

Defence: After acquiring Aaron Hyman from the Regina Pats in November 2018, he became a staple in the Americans’ defensive strategy, contributing both offensively and defensively. With Hyman graduating, Dom Schmiemann and Mitchell Brown will have to step into Hyman’s role this year, becoming a tandem on the blueline to lead the younger defensive core.

With the remainder of Tri-City’s defencemen staying relatively quiet on the offensive side of the game, but strong in their duty of stopping the opposition, the need for scoring power and playmaking abilities increases. Although he may be young, the Americans might find the aforementioned talent in the form of rookie defenceman, Marc Lajoie. In his 2018-19 season with the Northern Alberta X-Treme Prep (NAX) of the Canadian Sports School Hockey League (CSSHL), Lajoie recorded 35 points (11G-24A), led his team in defensive scoring and assisted NAX to the CSSHL Midget Prep Division title. While it may be a stretch to expect Lajoie to carry the blueliners offensively, it won’t hurt the Americans to have him and others contribute to the score sheet more often.

Goal: Beck Warm, who was an absolute workhorse for the Americans last season, provided a strong backbone for Tri-City to rely on. After posting a 2.94 goals-against average, .916 save percentage, 32-23-5-0 record and one shutout last year, the Americans are confident in his ability to continue his role as starting goaltender in his final season of WHL eligibility. 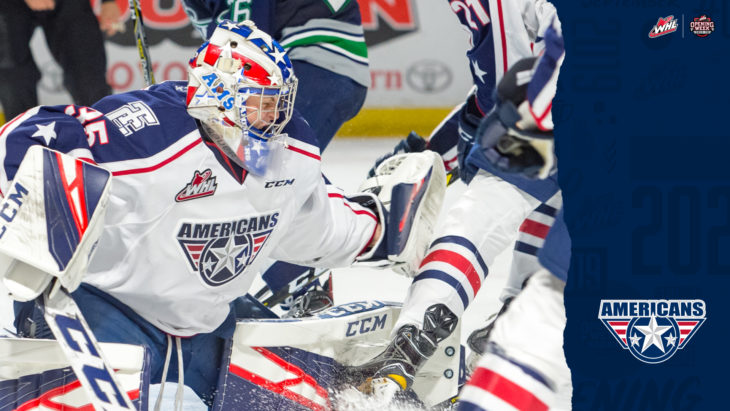 However, given that it is his last season, the netminding responsibility will be split a little more evenly this year to prepare the backup goaltender for the jump to starting goaltender next season.

“Whoever the backup is will play more than they did last year,” Tory said. “Last year it was more of a situation where Talyn was 16 and we were fighting for a playoff spot and Beck was healthy and we rode him and probably played him a little bit too much, but it was out of necessity and this year we would expect our backup to probably get into more starts. Mason Dunsford has come in and had a really good camp so he and Boyko are fighting for that spot. We’re in a fortunate situation there.”

With both Talyn Boyko and Mason Dunsford showing promising results in pre-season action, the Americans have to narrow down who will become a permanent member on their roster.

Player to watch: Although the Americans have Hrabik as their leading import player, keep an eye on Jan Cikhart, who is also from the Czech Republic. As the 31st overall selection from the 2019 Canadian Hockey League (CHL) Import Draft, Tri-City knew exactly what they were getting with 2020 NHL Draft prospect. 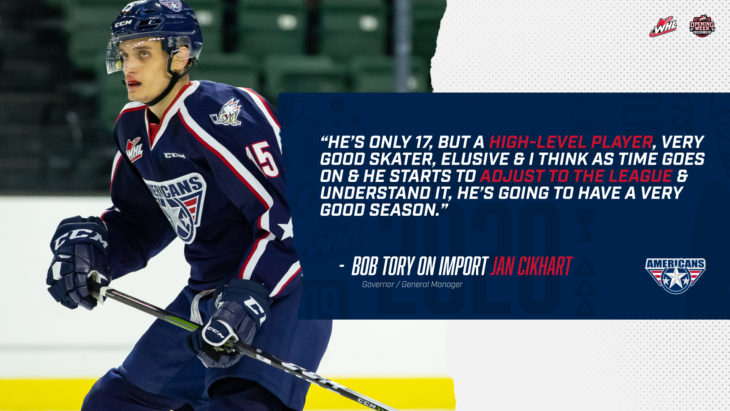 Through 40 games with the Bili Tygri Liberec U19 in the Czech Under-19 league, Cikhart recorded 31 points (18G-13A) and should be able to continue that trend with the support of the Americans’ forward group-members like Mutala and Olson.

Prognosis: With Hrabik, Olson and Warm, the Americans’ over-ager situation looks promising in terms of leadership. But, with the majority of their roster being on the younger side, players like Bouchard, Huo and Bjorkland will be required to step up in their roles to meet the expectations Tri-City sets. However, with a young core on almost every U.S. Division team, results may not be as clear cut as previous years.

“I think for the first time in the U.S. Division there isn’t a clear front runner,” Tory said. “The U.S. Division has been so strong for so long. You look at Everett and there are some key guys that are probably a bit young, but they skate well. Spokane has some returning talent but lost an awful lot, Seattle looks like they are going to be a younger team than we are, so I think the U.S. Division is up for grabs. I think a lot will depend on the incoming ’03s and different things. 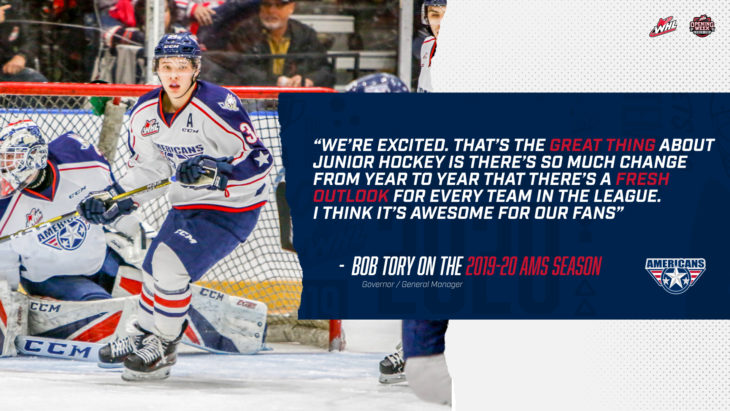