As the 2019-20 Western Hockey League’s regular season approaches, two teams will be previewed each day leading up to the start of the regular season, Friday Sept. 20. Team capsules are presented in order of 2018-19 finish within their own division. Today, we take a look at the Central Division’s Swift Current Broncos.

Forwards: Calling the Broncos a ‘lunch-pail team’ is a perfect description from the perspective Brockman. They won’t get any free passes in their foray to the Central Division. Brockman assessed his team as having to score by committee once again this season while looking for an improvement on their 135 goals for from last season, lowest in the WHL.

“Hopefully things will happen better than they did last year, but we’re not guaranteeing really anything,” Brockman said of his team’s outlook.

Having five returning forwards who reached double-digit goals last season helps in the short term. That includes Finnish import Joona Kiviniemi, who led the team with 16 goals and will have his sights set on the 20-goal plateau this campaign. Five of his 16 goals came on the team’s power play, which ranked last in the WHL with only 34 goals for, another area of concern going forward.

Ethan Regnier finished tied for the team lead with 31 points (10G-21A). Seeing him take the next step in his development will provide more offensive benefits for the team this season. Other than those two, off-season acquisition Zachary Cox as well as fellow overage talent Ethan O’Rourke will provide an offensive boost in the short term to help the Broncos remain competitive.

In addition to those three, the Broncos will look for next steps from Ben King, Carter Chorney, and Matthew Culling, who will be important parts of the team’s forward core for the next two-to-three seasons. 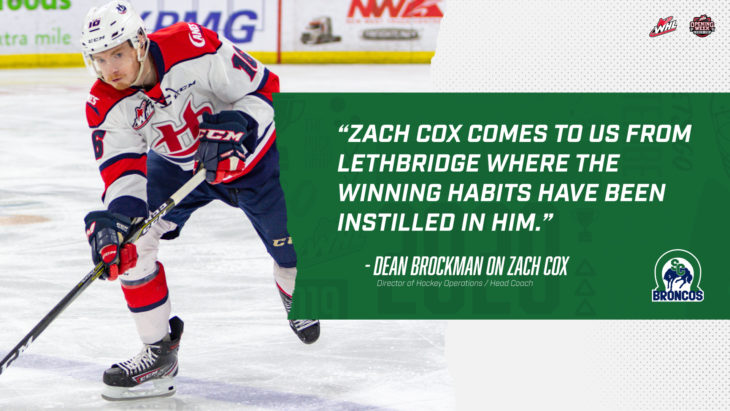 Defence: There’s a lot to like about the potential of the Broncos blue line this season, but expectations should be kept in check at the same time.

Leading the team’s defence in experience will be overage defender Jake Kustra, a veteran of 195 WHL regular season and playoff games. The majority of that experience came with the Saskatoon Blades when Brockman was leading that bench in seasons past.

“He’s a solid person, a solid kid, and a solid player,” Brockman said. “For us, that’s what we need to build our culture around a little bit.”

The list of experienced defenders also includes the likes of Garrett Sambrook and Connor Horning, who have already garnered 100-plus games of WHL experience each and will be relied upon for heavy minutes once again.

Another positive for the Broncos comes in Kasper Puutio, the first-overall selection from the 2019 Canadian Hockey League Import Draft. How his game translates to the North American surface in regular-season action remains to be seen, but the opportunity exists to step up and grab more minutes if he performs well. Puutio’s performance could ultimately be a key indicator of the Broncos’ success.

Outside of Horning’s 31 points, Alex Moar was the next-highest defenceman based on offensive contributions with 16 points (2G-14A). Brockman emphasized that the defence would have to pick their spots to jump up into the rush, thereby creating some odd-man chances and allowing for more offensive success. 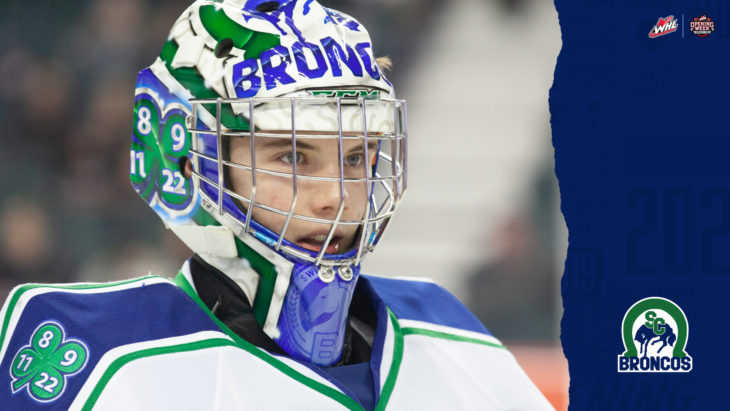 Goal: In 25 appearances last season, Isaac Poulter faced 39.11 shots per 60 minutes of action, a figure the Broncos will no doubt want to address as part of their growth this coming season. That’s not to say that Poulter can’t handle the duties, but that the same numbers over a full 68-game season could being to wear down even the most seasoned of goaltenders. Poulter showed flashes of the strengths he could provide to the Broncos last season, posting a 33-save shutout against the Regina Pats, topping the Edmonton Oil Kings twice, and holding the high-octane offence of the Prince Albert Raiders to three goals. Finding the ability to bring that work ethic every night is of upmost importance.

“He handled everything so well, we feel comfortable with him being the guy,” Brockman said of Poulter. “He’s proven in the preseason that he’s ready to take on it.”

With the likes of Joel Hofer and Riley Lamb no longer there to cushion the load, the test will be to see if the Winnipeg, Man. net minder can rise above it all. Backing him up will be Fort St. John, B.C. product Jordan Fairlie. The Broncos have given the 2002-born goaltender the backup role for a reason, but will have important decisions to make in terms of how much action the rookie sees in his first season against a division where there won’t be many, if any, nights off.

“Jordan won’t be denied with his work ethic,” Brockman said. “He’s certainly a strong candidate to be there. We’re hoping those two guys can carry the mail for us. It’s always a constant evaluation with kids and players, especially when you’re dealing with trying to be really strong in the asset management department.”

Player to watch: At the 2017 WHL Cup, Ben King had the crowning goal of the tournament in overtime against their rivals from Alberta. He turned that into a modest 26 points (5G-21A) last season and has already been listed as a top target on the 2020 NHL Draft radar. The winger has always utilized his passing strengths, but his contributions will be especially critical this season. Looking for a definitive leader in their forward core, NHL scouts and the Broncos alike will be looking to King as one of the players to step into a greater role.

One small snag in King’s plans last season was an upper-body injury that saw him miss almost two full months of action from early January to the start of March. The Vernon, B.C. product is still just a 17-year-old and will be given the opportunity to further develop his skills in a full campaign. 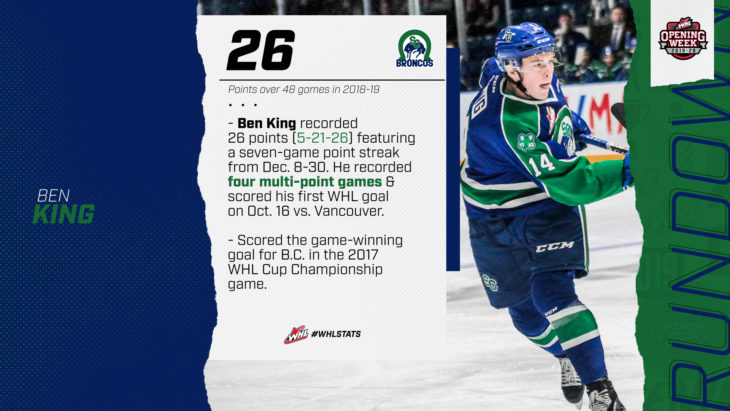 Prognosis: Into the second year of their rebuild, the Broncos will shift to the Central Division while keeping close ties to their Trans-Canada Highway rivals in Moose Jaw and Regina. Acknowledging the talent and tenacity of five new foes, Brockman knows his team is in for another challenge.

“It’s not a great time to be in this division, but the challenge is in front of us,” Brockman said. “We’re fully aware of it and we know where we’re at.”

Where players like Regnier, Horning, Chorney, and Poulter took the reins of the team’s offensive and defensive leadership last season, the challenge will be on them this year to prove that they’ve taken that next step and can challenge the best of the best within their division and conference on a nightly basis. King will also be in that group, looking to showcase his skills to those with influence on the NHL Draft rankings while also aiding his team in their ascension forward.

“Hopefully things will happen better than they did last year, but we’re not guaranteeing really anything,” Brockman continued about his team’s chances this coming season.

Overall, the Broncos finished 9-7-4-2 in one-goal games last season. Accounting for nearly a third of their games, winning those close battles will be important in the team’s morale throughout the entire season. 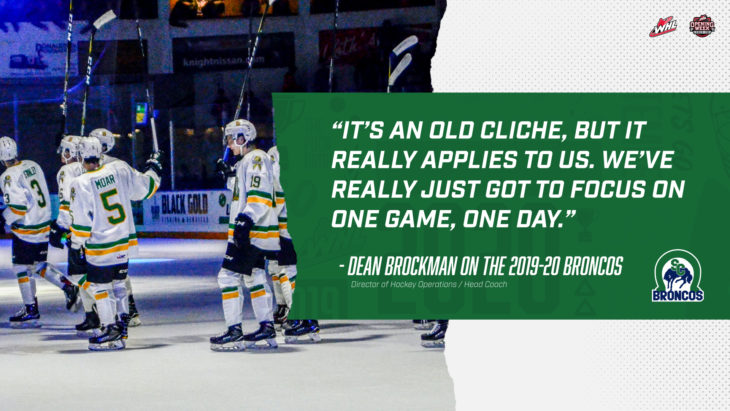