As the 2019-20 Western Hockey League’s regular season approaches, two teams will be previewed each day leading up to the start of the regular season, Friday, Sept. 20. Team capsules are presented in order of 2018-19 finish within their own division. Today, we take a look at the U.S. Division’s Spokane Chiefs.

Forwards: Compared to the transitions Spokane’s defence has gone through, the forward group for the Chiefs looks stable. With third-overall scorer Eli Zummack (15-53-68), newly drafted Minnesota Wild prospect Adam Beckman (32-30-54) and most likely Jake McGrew (31-23-54) returning to the Chiefs’ lineup this season, they will provide the young forward group leadership and consistency.

“You know Adam [Beckman] took an extra year to get into the league compared to other players,” Carter said. “It was smart for him to stay behind in midget and be a dominant player at that level and it paid off for him last year.”

“Certainly, he’s the kind of kid who’s going to mature and as far as a hockey player getting the opportunity to play in the top six all the time, he’s certainly got the game to be that player in the WHL and you expect that.” 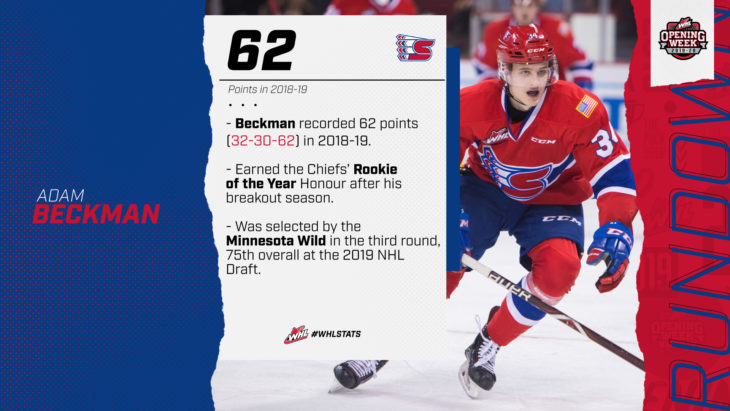 Included in the rookie-forwards group will be Blake Swetlikoff, Owen MacNeil, Grady Lane and Brandon Reller. With 2002 and 2001-born players like 2020 NHL Draft prospect Jack Finley, Luke Toporowski, Cordel Larson and Beckman to show them the ropes, the four rookies should be in good hands.

Defence: Unfortunately, there is still a lot of uncertainty in the Spokane Chiefs defensive lineup that hinges on New Jersey Devils’ signee and Chiefs’ captain Ty Smith. With the strong possibility that Smith could stay in the NHL with the Devils, Spokane is unsure of how the defensive string will shake out. Not only is this an issue defensively, but as the second-overall scorer for the Chiefs last season with 69 points (7G-62A), losing Smith is a problem for offensive power as well.

“We don’t know if we will get Ty Smith back or Jake McGrew or Philp Kral,” Carter said. “In these types of situations, so as far as the off-season goes, we were pretty quiet until we get an idea of players returning from pro camps.”

Import player Filip Kral is also somewhat of a question mark for the Chiefs at this point as he is also attending an NHL training camp with the Toronto Maple Leafs goes in September.

“[Kral has] gone off to the Toronto Maple Leafs camp so there’s potential that they will sign him as well,” Carter said. “We’ve got both fingers crossed that if he doesn’t stick with the Leafs that he will come back to us in Spokane for another season. So just in case he doesn’t return, we’ve got the two players from the import draft as a backup plan.”

However, with this uncertainty, one thing that should be a constant on the blue line is Noah King. As a secured 20-year-old player for the Chiefs, he will be asked to take on a big role if Smith does not return to the WHL. After he was acquired from the Swift Current Broncos last season, King ended the season with 14 points (5G-9A). While he may not have the same offensive power as Smith, King is a true defenceman that does an excellent job protecting his team from the opposition. 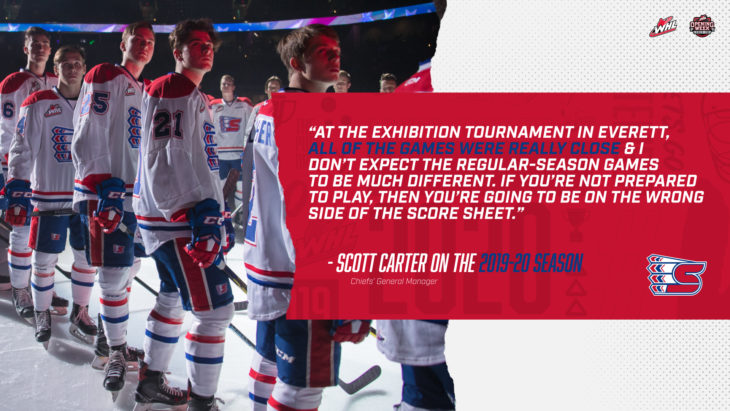 Goal: With their 20-year-old situation still uncleared, Reece Klassen’s status is still undetermined. Klassen was a mid-season acquisition from Lethbridge from last year and impacted the team positively when he stepped in-between the pipes. During his 13 games with Spokane last season, he posted a 2.71 goals-against average, .905 save percentage, 7-4-0-2 record and his first career WHL shutout.

However, one player the Chiefs are sure of is Los Angeles Kings prospect Lukas Parik. After Parik was selected in the 2019 NHL Draft, Spokane chose the 6-foot-4, 185-pound netminder 43rd overall in the Canadian Hockey League’s (CHL) Import Draft. In the Czech Under-19 league, Parik posted a 2.85 GAA and .917 SV% in 32 games with the Bili Tygri Liberec.

“He’s been really good,” Carter said. “He’s a very outgoing young man that has good energy and personality and speaks the language very well. [He] looks very good on the ice, moves well for a big guy and if he can remain healthy, we expect Lukas will have a real solid year in goal.”

Player to watch: After jumping from 41 points (15G-26A) in the 2017-18 season to 68 points (15G-53A) in the 2018-19 season, the Chiefs anticipate continued improved from Zummack. With Riley Woods moving onto the American Hockey League (AHL) with the Toronto Marlies and Smith potentially moving to the NHL, there is plenty of room for Zummack to move into the position of the first-overall scorer. After recording 18 multi-point games last season, the Chiefs will be leaning on Zummack to produce nights like that more and more often as the season goes on. 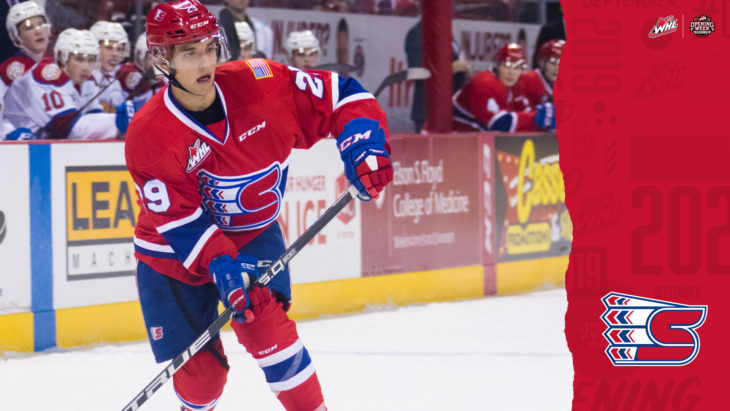 Prognosis: Until the Chiefs can secure Smith, McGrew and Kral on their roster for sure this season, they may be a little unsteady. Thankfully Beckman, Zummack and Parik will be there to handle the change and help set the younger players up for success.

Also aiding in the transition is recently named Head Coach, Manny Viveiros. Combining his NHL coaching experience along with his WHL Coach of the Year experience from his 2017 WHL Championship win with the Swift Current Broncos, Viveiros will provide a stable, championship-winning environment for the Chiefs players.

“We’ve got a lot of change this year as far as our coaching staff and some of the assistant general managers are new and goalie coaches,” Carter said. “It might take a little bit of time to get used to the new system and new people around it, but I think once they get used to Manny and his style, he will do a great job for it.” 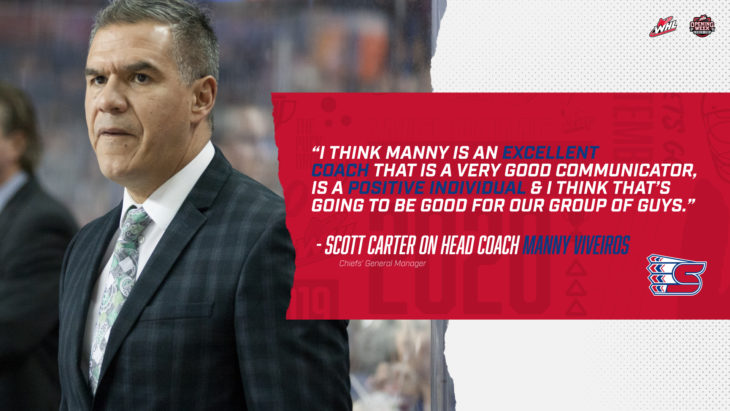