As the 2019-20 Western Hockey League’s regular season approaches, two teams will be previewed each day leading up to the start of the regular season, Friday Sept. 20. Team capsules are presented in order of 2018-19 finish within their own division. Today, we take a look at the B.C. Division’s Kamloops Blazers.

2019 Playoffs: Won tie-breaker game vs. Kelowna, Lost to Victoria Royals in Round One (4-2) 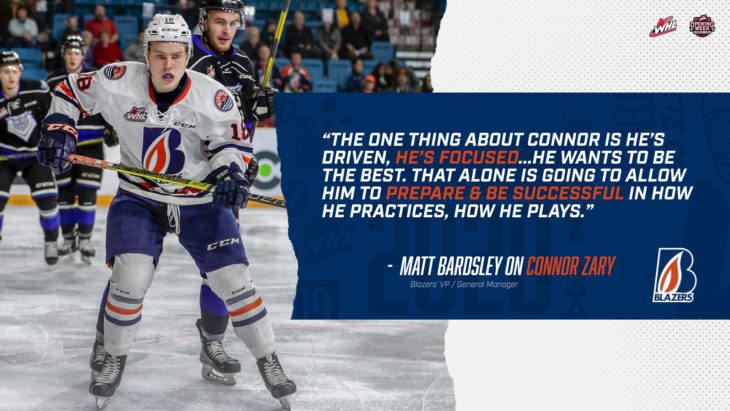 Forwards: When the puck drops next Friday at the Sandman Centre, the Kamloops Blazers will boast one of the most impressive forward cores in the entire WHL. What’s most impressive about the Blazers’ depth and scoring is how structured the next three years are in terms of offensive leaders.

“One thing I like about our group is we do have some experience and even last year now we have playoff experience,” said Blazers General Manager Matt Bardsley. “Down the stretch when we had to win just to get into a tie-breaker game, that was like a playoff series in itself.”

The team’s Marwayne, Alta. connection in Zane Franklin and Orrin Centazzo showed how productive they could be last season and will get more chances to build upon that this year. Franklin will be a key piece of the Blazers’ offence and could be one of the top-producing 20-year-old forwards in the league this year.

With more ice time available, the 19-year-old Centazzo saw a jump in production following a 2018 trade from the Everett Silvertips. His first full season in the B.C. Division built upon that late-season success, more than doubling his production to 51 points (18G-33A) in 65 games in 2018-19. He then finished tied for second in scoring during the team’s brief playoff run, posting four points (1G-3A) in six games.

Another year down the line and you’ve got a rising talent in soon-to-be 18-year-old Connor Zary. The Saskatoon, Sask. product ranked in a tie for 15th among all WHL skaters in scoring with 40 points (15G-25A) from January 1, 2019 to the end of the regular season, leading all Blazers skaters as well. For Zary to do that as a 17-year-old just amplifies the ridiculousness of his talent.

Zary’s strong second half put him second on the team in scoring with 67 points (24G-43A) for the season overall. If anything, it builds anticipation for the 2020 NHL Draft. Born September 25, 2001, Zary is one of several talented WHL players who ended up on the other side of the September 15 cutoff for the NHL Draft.

Combine that with a strong performance at the 2019 IIHF U18 World Championship in Sweden last spring and NHL teams will be eager to secure the rights of the 6-foot-0, 180-pound forward in June next year.

“He understands the league really well,” Bardsley said. “He’s dealt with adversity with our team. We’ve had ups and downs. He was a big part of our run last year, especially the second half of the season he was really strong. [He] scored some big goals; some timely goals.”

The Blazers will also welcome the much-anticipated full-time debut of hometown product Logan Stankoven. The fifth-overall selection from the 2018 WHL Bantam Draft rewrote the British Columbia Hockey Major Midget League (BCMML) record books with 101 points (49G-52A) in 39 games with the Thompson Blazers. He already has 13 WHL games of experience, playing seven in the regular season and all six in the playoffs.

While he’s expected to be a steady offensive force one day, Bardsley is keeping realistic expectations for the 16-year-old.

“He’s going to have some protection within the lineup so it’s going to allow him to develop his game the right way,” Bardsley said. “Certainly it’s going to be a change, but he’s in the league, everybody knows about him.

“I think he’s going to be able to handle coming into the league as a 16-year-old just fine.”

Mix in productive seasons from Brodi Stuart, Martin Lang, Kobe Mohr and you instantly have three lines that new head coach Shaun Clouston will be able to roll out with confidence. 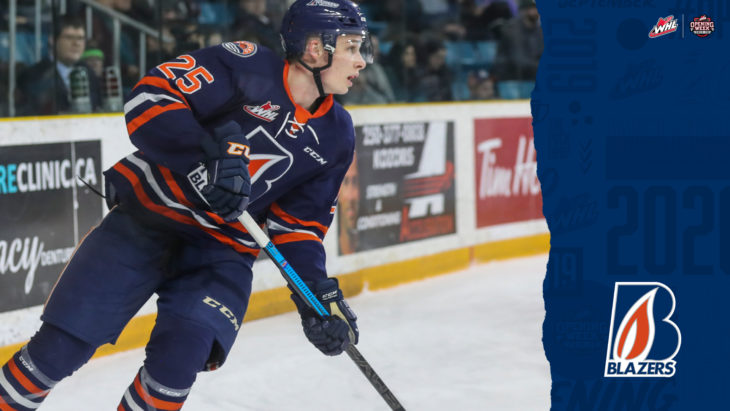 Defence: When Quinn Schmiemann heard the Tampa Bay Lightning call his name in the sixth round of the 2019 NHL Draft last June, it marked the eighth-straight draft to feature a player currently on the Blazers. With an invitation to the Lightning’s main camp as well, Schmiemann is already rising on the defensive charts following a season that saw him lead the team with 28 points (5G-23A) in 58 games. Turning 18-years-old in the summer, Schmiemann will be counted on to take a larger role in the team’s defence.

“Quinn had a good season for us last year,” Bardsley said. “I was happy to see that he got drafted.”

Luke Zazula came close to matching Schmiemann’s offensive totals with 27 points (3G-24A) of his own and should provide another strong option from the left side.

Outside of those two offensive leaders, Jackson Caller, Montana Onyebuchi, and Sean Strange should also take a step forward with the club. A Kamloops product, Caller will be entering his final season of junior hockey looking to provide valuable experience to the team’s blue line with more than 200 games of WHL regular season experience already under his belt.

Another year older, Onyebuchi is impressing at the Calgary Flames’ camp and the 19-year-old should return to the Blazers hungry to earn a bigger role. Using his 6-foot-3, 212-pound frame has always been his advantage, but he was also able to contribute 20 points (5G-15A) last season, figures he’ll want to maintain or increase.

The Blazers will also add 2001-born Swiss import Inaki Baragano to the team’s roster in what could prove to be a major addition.

“I was real impressed just with his personality,” Bardsley said. “He’s a bit of a self-starter and then in training camp we thought he was really good. He skates well, sees the ice well, makes a really good first pass.

“We’re excited with what we’ve seen with Inaki so far.”

Goal: In the WHL, first impressions can mean everything, which is great news for Dylan Garand.

The eighth goaltender selected at the 2017 WHL Bantam Draft, Garand was thrust into the starting role after an untimely injury to Dylan Ferguson near the end of the regular season in 2019.

Stepping into the spotlight, he was nothing short of incredible, posting an 5-0-1-0 record, 1.63 goals-against average, a .939 save percentage, and one shutout to get his team into the tie-breaker game. He then stopped 27 of 28 shots in that tie-breaker game to get them into the 2019 WHL Playoffs.

“He gained some really valuable experience and then this summer representing Canada at the Hlinka Gretzky Cup, which was great for him,” Bardsley said. “I know he’s looking forward to the season.”

The Blazers also have a rising talent in the 18-year-old Rayce Ramsay, who was arguably the best rookie goaltender in the Saskatchewan Junior Hockey League last season, posting a 16-7-1-1 record, 2.73 GAA, and a .923 SV% in 27 games with the Humboldt Broncos.

Bardsley spoke highly of both goaltenders and the potential strength that could exist from utilizing both this coming season.

“We have two quality goaltenders that are quality people and they’re going to be pushing each other,” Bardsley said. “It’s going to be a nice competition, but it’s a healthy one.” 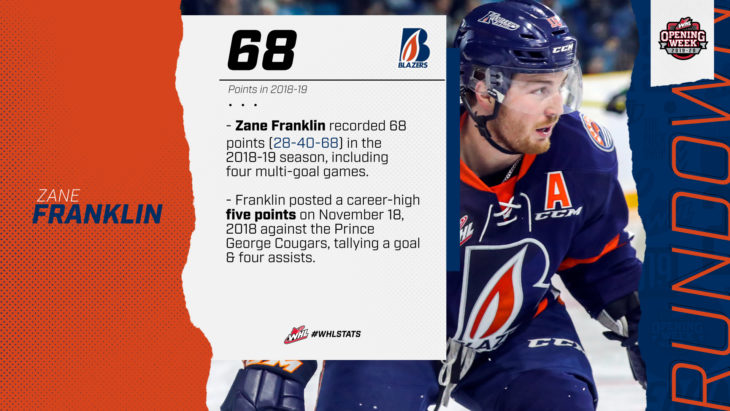 Player to watch: Zane Franklin was one the best acquisitions from the 2018 off-season, coming onto the Blazers and leading the team in scoring with 68 points (28-40-68).

As one of three Blazer forwards to appear in all 68 games during the 2018-19 campaign, Franklin led the team in scoring throughout the first half of the season, posting 37 points (19G-18A) in 34 games. Held to just two multi-goal games in his entire WHL career before joining the Blazers, Franklin posted a hat trick and two two-goal games before the calendars had a chance to flip over to 2019.

Part of a strong overage trio, the Blazers will lean on Franklin to be one of their offensive leaders again as they press to compete with the best the division, conference, and league has to offer.

Prognosis: If you were living under a rock for the last two weeks of the 2018-19 WHL Regular Season, you missed one of the most exciting races for a playoff spot in recent memory. The Blazers were the hottest team down the stretch to force the tie-breaker game, which they of course won, qualifying them for the 2019 WHL Playoffs.

However, that’s where the dream ended as the Victoria Royals took the series victory in six games. Bardsley was insistent that the team’s momentum shouldn’t end there.

The team’s forward core is set to dominate with talent however they breakdown their four lines. With the trio of Franklin, Centazzo, and Zary leading the lineup, the contributions of Stuart, Mohr, Lang and Stankoven will provide the secondary scoring teams require in order to make credible runs in the WHL Playoffs.

On defence, the physically-punishing style of Montana Onyebuchi and an older Quinn Schmiemann should make the Blazers’ defence tough to handle.

If Garand’s audition at the end of the regular season was an indication of how he’ll perform this coming season, fans of the Blazers should be in for a treat as well at all three positions.

That being said, the B.C. Division certainly won’t be a cakewalk either. The Vancouver Giants have realistic aspirations to hoist the Ed Chynoweth Cup while the Kelowna Rockets will be looking to excel in a year where they’re serving as hosts of the 2020 Memorial Cup Presented by Kia.

“I believe that our team, with the experience that we gained last year and the amount of players that we do have returning, I really feel that we can compete with both those teams,” Bardsley said. “Every night in our division, it’s going to be a tough matchup. I do feel confident with our group.”

Bardsley also reunited with Shaun Clouston during the off-season, naming him as the team’s head coach following the resignation of Serge Lajoie. With Darryl Sydor also on the bench in a coaching capacity, Bardsley has the team set up for success at each position.

“I’m just real happy with what [Clouston]’s been able to bring so far,” he added. “The dynamic between Shawn and Darryl, it’s a real good tandem together.” 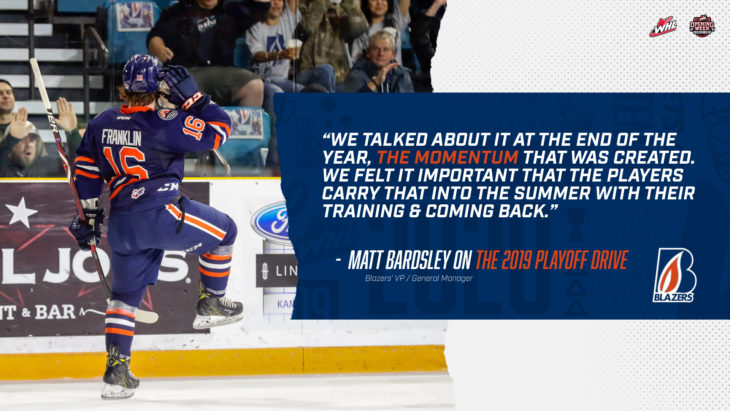