As the 2019-20 Western Hockey League’s regular season approaches, two teams will be previewed each day leading up to the start of the regular season, Friday Sept. 20. Team capsules are presented in order of 2018-19 finish within their own division. Today, we take a look at the U.S. Division’s Everett Silvertips.

2019 Playoffs: Lost in Western Conference Round Two vs. Spokane Chiefs (4-1)

Forwards: For 320 WHL regular season and playoff games, Connor Dewar became a perfect embodiment of the heart and soul of the Silvertips. The team’s captain last season and Minnesota Wild prospect led the team offensively and was every bit the character guy that NHL teams hope to have in their organization.

Now, the Silvertips don’t necessarily have to take on a completely new identity, but they will have to hope Dewar’s influence will have spread to the next core of the Silvertip players.

“What you do is you hope the culture you’ve developed here over the last number of years with players, like Connor and the returning guys that have played with Connor have been part of a pretty good couple of seasons, will step up and assume some of that leadership here,” said Silvertips General Manager Garry Davidson.

That cultural shift will be passed on to another top-tier offensive producer in captain Bryce Kindopp, who takes over the mantle from Dewar. The Lloydminster, Alta. product edged out Dewar for the team lead in goals, ultimately finishing with 73 points (39G-34A) last season. As someone who has watched Kindopp get better each year, the thought of having him make another push forward as a 20-year-old creates an exciting prospect of the team’s chances for Davidson. 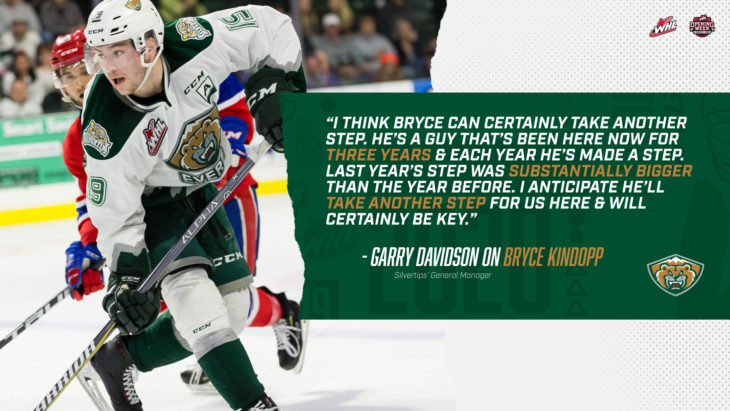 With four 20-year-olds on their roster, two at forward and two on defence, a hard decision awaits in Everett. While Kindopp’s appointment as captain confirms he’ll stay, the team could also benefit from having Max Patterson in the team’s forward group. He has championship experience from 2018 with the Swift Current Broncos and posted a respectable 39 points (14G-25A) in 63 games last season between Swift Current and Everett.

This season, the Silvertips will also be aiming to see more growth from their 2000 and 2001-born groups. The duo of Martin Fasko-Rudas and Reece Vitelli both fall into that group, with both coming off a 2018-19 campaign where they set career-high totals in goals, assists, and points. With more opportunity at the top of the lineup, expect some separation in terms of those forwards as they grow into greater offensive roles.

In addition to Fasko-Rudas, the Silvertips added center Michael Gut from the Czech Republic to their roster at the 2019 Canadian Hockey League Import Draft. The early impressions are promising for the 17-year-old.

“He’s much stronger than I anticipated,” Davidson said. “Usually 17-year-olds you’re always concerned about the strength factor. He’s come in here and he’s been really strong on pucks and really strong on his feet.

“He’s made some good plays and he’s scored goals early on so we’re pretty excited. We have always been a little bit thin down the middle here so him as a centre is a real plus for us too.”

In 2017-18, the Silvertips set a franchise high for goals in a single season with 246, with the 2018-19 edition of the Silvertips producing 223 to rank in a tie for 12th in the league. In their 16 seasons in Everett, their commitment to defence has been a good enough excuse to warrant that level of offensive production.

If they hold up things at their end once again, the Silvertips have the pieces in place up front make a difference within their division and conference. 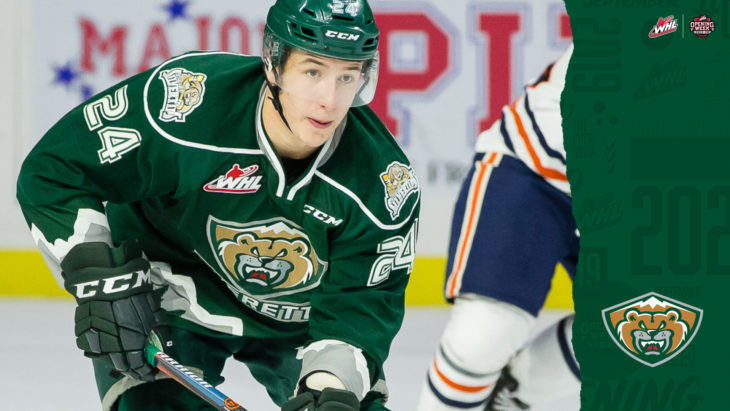 Defence: When you think of great defence in the WHL, your answer will lead you to the Silvertips sooner or later. That was the case again last year as the team saw the further emergence of Jake Christiansen, Wyatte Wylie, and Gianni Fairbrother on the team’s backend, continuing their tradition of strength at the position.

With their eyes on the Silvertips’ blue line once again, the Montreal Canadiens chose Fairbrother in the third round of June’s draft.

All three could return to the lineup again this season, depending how the 20-year-old situation shakes out with the team’s forwards. Mix in another defenceman on the rise in Ronan Seeley and that’s a young core that could rival the best in the league this year.

“Those are four pretty good pieces to have on the backend,” Davidson said. “Those four right now are a real strength of our group. They move pucks so well, which will really help our forwards as well. I really like that group of four. We’ve got some young guys coming in behind them.”

After competing with Alberta at the 2019 Canada Winter Games, Fort Saskatchewan, Alta. product Olen Zellweger will be looking to find a spot in the lineup soon enough as well. He’s taken to an offensive role with OHA Edmonton Prep of the Canadian Sport School Hockey League (CSSHL) the past two seasons and could be a significant part of the future. 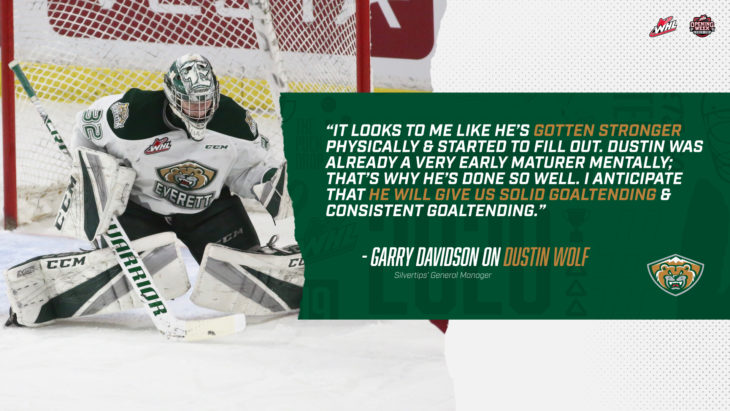 Goal: Well, we hate to break the news to the other nine teams in the WHL’s Western Conference, but Dustin Wolf is headed back to the Silvertips in time for this weekend’s games. The Calgary Flames prospect went from a late selection in June’s draft to becoming one of the most talked-about players in the team’s camp. Now, he’s ready to return to the Silvertips and build upon his success of last season, becoming the first goaltender in the team’s history to win 40 or more games in a single season.

Already a respectable 54-21-2-2 with a 1.83 goals-against average, .934 save percentage, and 11 shutouts for his WHL career, Wolf should be in the league’s top tier of goaltenders for the coming season. He sits fifth on the Silvertips’ all-time win list and even a season a .500 hockey would move him into third. Likewise, Wolf just needs a single shutout to tie Michael Wall for the third-most in franchise history.

“It’s key for me that you need goaltending and people on the backend,” Davidson said. “If you stop pucks and defend well, that’s key. It’s also key for our forwards that we’ve got people on the back that can get pucks up and helps us with our offensive attack. If you want to be successful, you’ve got to be solid in all three positions. I feel confident as we move forward.

“We may surprise some people, but maybe we won’t either. Time will tell.”

The team will most likely end up with an All-American duo between the pipes with Wolf and an eventual backup in Montana’s Braden Holt or Minnesota’s Keegan Karki.

The second-last player selected at the 2008 WHL Bantam Draft, it wouldn’t really surprise anyone if Holt developed into another late-round steal for the U.S. Division club. With Wolf still just an 18-year-old, the team may elect to go with the younger backup in Holt over a 2000-born talent in Karki.

While older, Karki has played in the United States Hockey League each of the past two seasons and could be a veteran presence to the team’s crease in any absence of Wolf. Davidson is already entertaining the thought that the Silvertips will be without Wolf for part of, if not all, December due to the 2020 IIHF World Junior Championship.

With that in mind, it’ll be interesting to see the final decision the Silvertips make going forward. 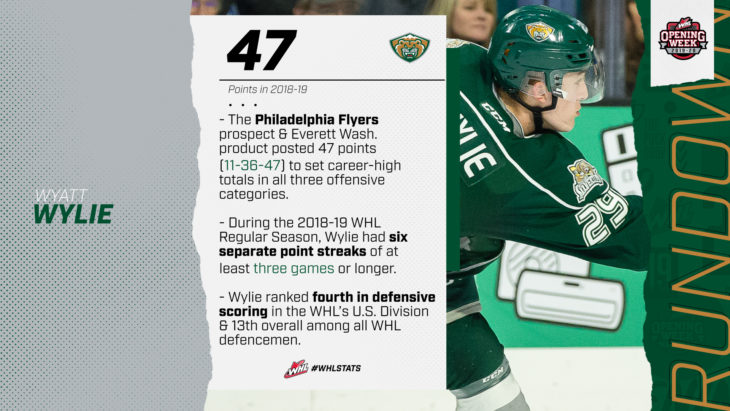 Player to Watch: Returned from the Philadelphia Flyers, there’s no place like home for Silvertips defenceman Wyatte Wylie.

The born and raised product of Snohomish County has become one of the team’s defensive leaders, ultimately edging out teammate Jake Christiansen in defensive scoring on the Silvertips this season with 47 points (11G-36A) in 67 games.

A consistent piece of the team’s regular season and playoff success, Wylie has missed just two regular season games in his WHL career and has appeared in all 42 of the Silvertips playoff games in the past three seasons.

Wylie began the 2018-19 campaign with points in four-straight games and posted three other point streaks of at least four games throughout the rest of the regular season. A product of minor hockey in Everett and three full seasons with the Silvertips have his skills at an all-time high while looking to find new ground.

“Our coaches are going to be working hard to grow each and every one of the players on our team and also make sure the bar is set very high and push our players to get to those levels,” Davidson said of his entire roster. “That’s what has happened the past couple years here.”

Officially, Wylie will turn 20 on November 2, a Saturday night that will see the Silvertips play at home in front of a raucous home crowd at Angel of the Winds Arena. By that time, Wylie will be hoping he’s done enough to convince the Flyers that singing him to an entry-level contract is a smart move. Expect the team’s hometown star to come motivated to succeed and extend their season as far into spring as possible.

Prognosis: From the outside, the departures of Dewar and Riley Sutter hurt the team’s offence, but the Silvertips have been built to withstand these types of losses and grow from within.

The acquisitions of leading talents Garrett Pilon, Ondrej Vala, and Zack Andrusiak in the past two seasons have been a bit of a rarity for the club that has usually placed a priority on drafting and developing their own talent.

Kindopp’s performance will drive the Silvertips’ offence this season and he’ll get a chance to showcase exactly the type of player he is by trying to continue the team’s strong culture of perennial success. Behind him will be a strong collection of second and third-year forwards looking to take on bigger roles. If the pieces fit and gel properly, the Silvertips will once again be a team to take note of with the puck.

On the blue line, the Silvertips boast a strong core for another season. Fairbrother, Walker, and Seeley will all take on bigger roles. Meanwhile Wolf will provide the team with continued strength in the crease that should easily place them among the contending teams in their division.

For whatever reason though, each season the question lingers as to if the off-season losses are enough to finally disrupt the Silvertips’ chain of three-straight U.S. Division titles.

“At the start of the year people couldn’t believe we were as good as we were,” Davidson said. “I don’t see any reason, if we take this same approach with this group, that we can’t move the bar or get close to the bar and therefore have a real good success as a team.”

An unprecedented fourth-straight division title would further solidify the team’s legacy and strength among their divisional peers.