As the 2019-20 Western Hockey League’s regular season approaches, two teams will be previewed each day leading up to the start of the regular season, Friday Sept. 20. Team capsules are presented in order of 2018-19 finish within their own division. Today, we take a look at the Central Division’s Calgary Hitmen.

Forwards: Going through the route of the WHL Bantam Draft, the Calgary Hitmen have also done well in recent years. Building around captain and Ottawa Senators prospect Mark Kastelic for his 20-year-old season, the Hitmen have a talented group of forwards to lead them to the top.

“Our captain is the key,” said Hitmen General Manager Jeff Chynoweth of Kastelic. “We get him back; it just makes us that much deeper down the middle of the ice.

“You can’t replace his 47 goals from last year.”

An untimely injury to Cael Zimmerman will delay his further development, but it also opens the doors for others, including Riley Fiddler-Schultz and the team’s top pick from the 2018 WHL Bantam Draft, Sean Tschigerl. Those depth pieces will be key in complimenting the team’s top offensive options.

Having already scored the first goal of his WHL career, Tschigerl is coming off a productive season with OHA Edmonton Prep and could easily carve out a role for himself throughout the season. There’s also room for pre-season standouts like Adam Kydd, who posted three points (1G-2A) in four games to earn key roles with the team to begin the season.

Acknowledging that his team may not have had the ability to contend at the top tier when he first took over as General Manager in 2017, Chynoweth has put the pieces in place up front for exactly that to happen this season.

During the 2017-18 season, the trading of Matteo Gennaro and Beck Malenstyn to the Swift Current Broncos yielded a group that included Riley Stotts and Josh Prokop, now two valuable pieces of the team’s core for the coming season. The trading of Jake Bean to the Tri-City Americans also yielded a return that included Carson Focht, now a prospect of the Vancouver Canucks and the Hitmen’s third-leading scorer from last season.

“We think Prokop is going to breakout,” Chynoweth said of the older brother. “He’s always been a top-six performer at every level that he’s played. Last year he joined our team more or less for the whole season.”

His 28 points (9G-19A) last season has Chynoweth eyeing a strong second season for the 19-year-old. Also in the team’s 2000-born core is Orca Wiesblatt, who is more than familiar with the Hitmen and could bring a strong veteran presence to the team’s middle six.

Add onto that with the addition of 1999-born forward James Malm last season and the Hitmen are surging with talent up front.

Those with good forethought can certainly believe the hype based upon the Hitmen’s performance last season. The Hitmen had Kastelic and Malm inside the top 20 in league scoring as 19-year-olds while Focht found his way into the top 50 as an 18-year-old with Stotts not too far behind either. They owned the second-best power play in the league and converted on a league-best 34.5 per cent of their power-play chances on the road. They also reach the 20-win mark at home for the first time since the 2015-16 season.

Eager to compete with the contenders in their division and conference, the Hitmen will be a handful up front for another year. 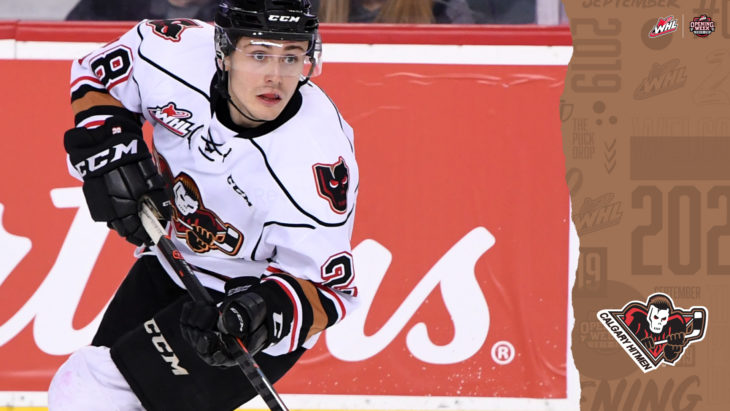 Defence: One of the bigger deals at the 2019 WHL Bantam Draft saw the Hitmen acquire Vancouver Canucks prospect Jett Woo from the Moose Jaw Warriors.

Knowing the importance of building to support this year’s group of talent, Chynoweth said it was his team’s elimination from the 2019 WHL Playoffs that put him on the path of searching for improvement on the blue line.

“We just felt from the second round against Edmonton in last year’s playoffs that there was a big glaring difference between the two team’s defence groups,” Chynoweth said. “We had to get more production from our backend and more speed. It was our number-one priority to get a number one or number two defenceman.”

They have that improvement and more in Woo, who can be an everyday number-one defenceman for the Hitmen. Philadelphia Flyers prospect Egor Zamula and overage stalwart Dakota Krebs give the Hitmen a formidable trio for opposition to deal with on a nightly basis.

Woo and Zamula finished inside the top 10 in scoring for WHL defencemen last season and, barring a sudden promotion to the National Hockey League, should find themselves in that mix again this year.

“We think we’ve got some pretty good depth on the backend,” Chynoweth said. “We’re really excited about our [defence] group and we’re excited that we have the opportunity to have Jett Woo in our lineup for the entire season.”

Outside that trio, the team has the likes of Jackson van de Leest, Layne Toder, and Luke Prokop to provide balance to the team’s backend. 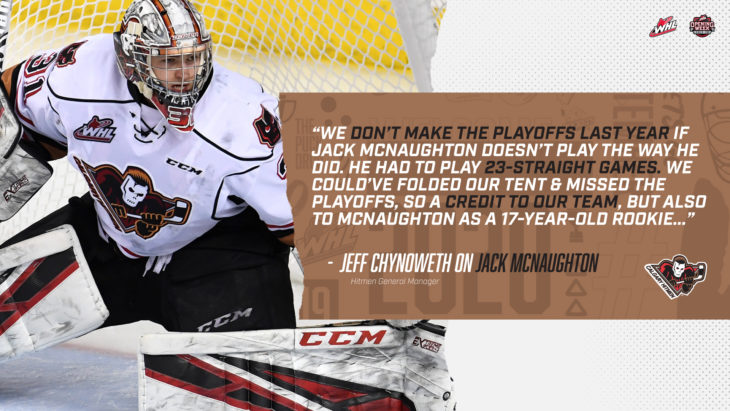 To expand on this, the Calgary, Alta. product was simply sensational as a rookie between the pipes for the Hitmen last season.

McNaughton posted 25 wins while maintaining a 3.25 goals-against average, a .888 save percentage, and posted two shutouts. That’s more than most teams expect from a rookie goaltender, but it allowed the Hitmen to press on with a promising season with strength at all positions.

With 57 games of WHL experience under his belt, the 6-foot-1, 180-pound goalie will be counted on to play a similar part in the team’s success.

After the intensity of a wild series against the Lethbridge Hurricanes, the Oil Kings made quick work of McNaughton and the Hitmen. Expect the product of the Calgary AAA Royals program to come in with a chip on his shoulder, looking to right the wrongs of last season’s ending.

Player to Watch: Mark Kastelic was the team’s leader on the score sheet and from the position of the team’s captain in the 2018-19 campaign. Now, he has another year to show the Ottawa Senators brass as well as the rest of the National Hockey League that he’s the steal of the fifth round from the 2019 draft.

Going into a year where the Hitmen have such high expectations, it stands to reason that Kastelic will be a key part of the team’s success. He had the most goals of all Central Division skaters and led the league with 24 power-play goals.

The team’s second-round selection at the 2014 WHL Bantam Draft has developed along a perfect trajectory, setting or matching career-high totals each season he’s played in the league. His 14 multi-goal games in the regular season were a leading trait for the club while his nine points (6G-3A) in nine playoff games also led the way. 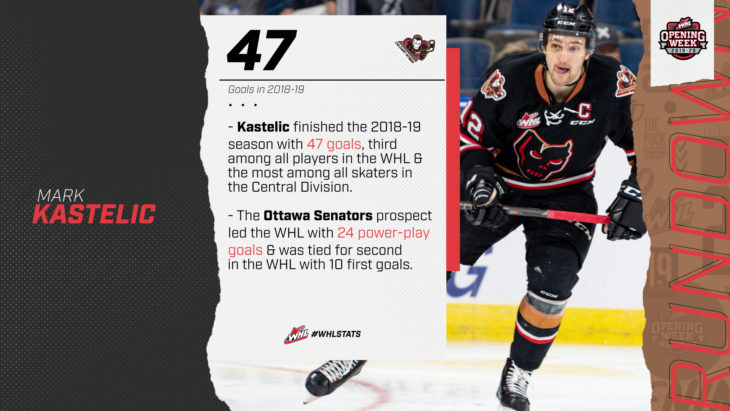 As someone who has experienced the ups and downs of the club sin, Kastelic knows how much it’d mean to win with the Hitmen and you can bet he’ll be every bit the offensive force he was last year, if not more, to ensure it happens while he’s around.

“We’ve built for this as part of the cycle of major junior hockey,” Chynoweth said of his team’s roster projection. “We expect to have a competitive hockey club when we get everyone back from NHL training camps.”

Kastelic’s 47 goals were the most in a single season since Adam Tambellini posted a similar total in the 2014-15 campaign.

Prognosis: Celebrating their 25th year in the WHL, the Calgary Hitmen are determined to make it a special one on the ice. Jeff Chynoweth, who has his own experience in reaching the top of the WHL, has quietly gone about acquiring the key pieces for this year’s roster, properly assessing the rising talent in the league.

Barring injury, the Hitmen should have a forward core that can compete with the best the division and conference have to offer. Their defensive corps is significantly aided by the addition of Jett Woo.

Goaltending will be a key position for the Hitmen. If Jack McNaughton can deliver the same form he provided the Hitmen with last season, they’ll be more than fine, but they’ll also need Carl Stankowski to provide strength in a backup role to share the load. Should McNaughton ever falter, the Hitmen will need their backup to provide a seamless transition in the crease.

As the Hitmen gained confidence in the 2018-19 season, opponents seemed to underestimate the Calgary squad at home. It was here where the Hitmen would be most successful, earning 20 of their 36 wins at home.

Built with championship aspirations in mind, the Hitmen need to ensure they don’t fall victim to the same mindset either as they’ll face plenty of competition within their own division and the entire Eastern Conference. 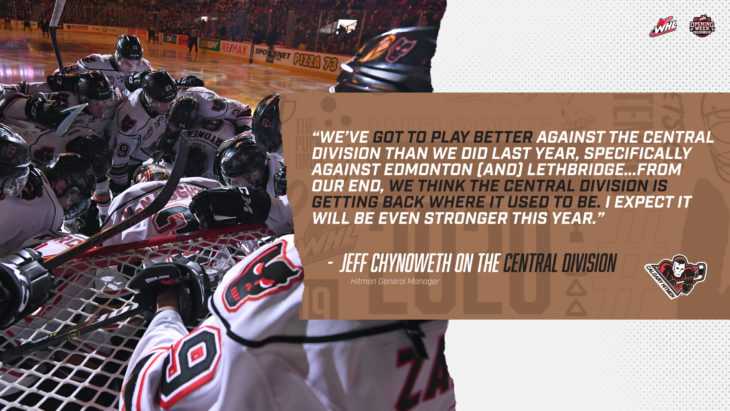