As the 2019-20 Western Hockey League’s regular season approaches, two teams will be previewed each day leading up to the start of the regular season, Friday Sept. 20. Team capsules are presented in order of 2018-19 finish within their own division. Today, we take a look at the East Division’s Brandon Wheat Kings. 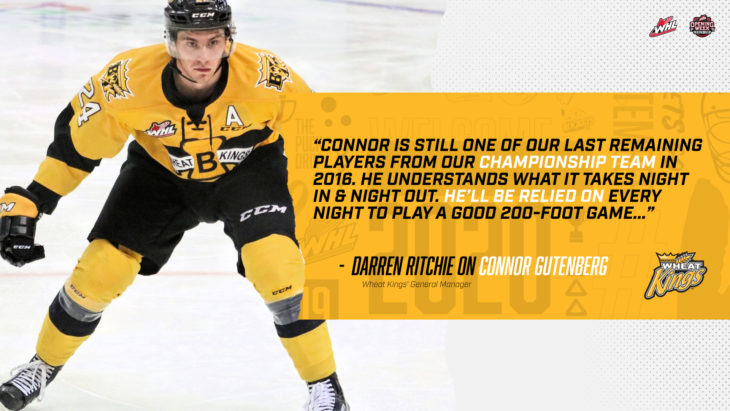 Forwards: The Wheat Kings lost two key players up front in the off-season but are positioned well to move right back up the division standings with a familiar group of names. Once rookies that hoisted the Ed Chynoweth Cup, Stelio Mattheos and Linden McCorrister combined to provide more than 500 WHL regular season and playoff games to, what was up until last year, their home province’s lone WHL team.

A team that has thrived off their province’s hockey talent for decades will still be composed heavily of players from there, but the influx of talent from other provinces will also play a part in the team’s success moving forward. From Surrey, B.C.’s Luka Burzan and his 40 goals last season to the expectations of a promising sophomore campaign by Lethbridge, Alta.’s Ridly Greig, and the full-time arrival of Abbotsford, B.C.’s Jake Chiasson, the rest of the west wants in to foster more success with the Wheat Kings.

“We’re excited,” said Wheat Kings General Manager Darren Ritchie, who is entering his first season at the helm of the franchise after spending nearly two decades around the club, five as a player and 13 in the team’s front office. “The two weeks we’ve had with the training camp and practicing here for the exhibition games, practices have been real structured, lots of detail going into it.

“I expect our team will be hard working with lots of details to their game. We’ll try to play a real quick game as well.”

From the Manitoban core, hometown star Connor Gutenberg is leading this year’s squad from an overage position. Once a rookie who got to hoist the Ed Chynoweth Cup with Mattheos and McCorrister, Gutenberg will be on a mission to lead his team back to the WHL Playoffs. Individually, he’ll be aiming to record his fourth-straight season of double-digit goals while looking to top his career-high total of 53 points from the 2017-18 campaign.

Offence isn’t an issue for a team that scored more goals than seven playoff-bound teams in 2019, though they’ll have to figure out how to replace the 58 combined goals by Mattheos and McCorrister or figure out how to play successfully without it.

Expect the likes of Ben McCartney and Caiden Daley to take on bigger roles as part of the team’s offence to alleviate this gap in goals.

“Coming after a year of not making the playoffs, they understand the importance of every game now,” Ritchie said. “We look forward to them to lead our team offensively and defensively.” 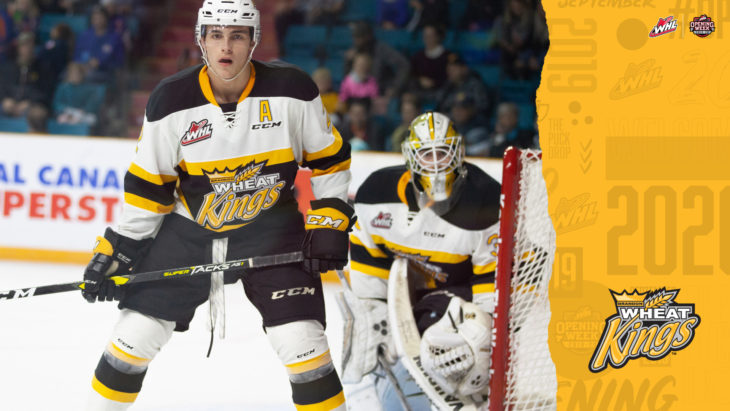 Defence: The same blue line that has produced names like Provorov, Clague, Redden, and McCrimmon, among many others, in the past has a new name on the rise: Braden Schneider. The Prince Albert, Sask. product barely missed the cutoff for the 2019 NHL Draft, but he’ll be high on the charts of scouts come June 2020.

Already entrusted as part of the team’s leadership group last season, Schneider finished second in team defensive scoring, posting 24 points (8G-16A). A physical presence in his own end, he’s not afraid to join the rush up ice, adding an extra element to the team’s execution in odd-man situations.

“Braden brings a lot of leadership and plays a lot of minutes,” Ritchie said. “He’ll be relied on heavily.”

As much fun as it’ll be to watch Schneider develop his skills in the NHL Draft spotlight, the Wheat Kings will also have strength on the left side in Zach Wytinck, a product of nearby Glenboro, Man. Once acquired for a conditional draft pick in 2016, Wytinck saw an offensive uptick last season with 43 points (5G-38A) in 65 games, setting career-high totals in all three offensive categories.

As the team’s younger forwards look to gain more experience, the dependability of both Schneider and Wytinck on the backend this season can not be understated.

Outside of those two, Chad Nychuk was the only other returning Wheatie on the blue line to hit double-digit points.

Including Schneider and Nychuk, the Wheat Kings have a core of four 2001-born defencemen while Vincent Iorio already has a full season under his belt as a 2002-born rear guard. Impressed with those player’s gains in the second half, Ritchie was eyeing solid growth on the blue line moving forward.

Goal: In the short term, the crease for the Wheat Kings belongs to Jiri Patera. For the long term, a pair of Albertan goaltenders have their sights set on earning full-time roles with the Wheaties.

Brandon sees value in using both an import and overage spot on Patera, who showed immediate promise for Brandon last season, posting a 5-0-1-0 record to start the 2018-19 campaign. While he finished the season with a winning record, earning just a single win in the month of March 2019 wasn’t the ideal way to finish. The Vegas Golden Knights prospect will enter the season motivated to do better to boost the Wheat Kings in the standings while also convincing the Golden Knights he’s worthy of an entry-level contract. 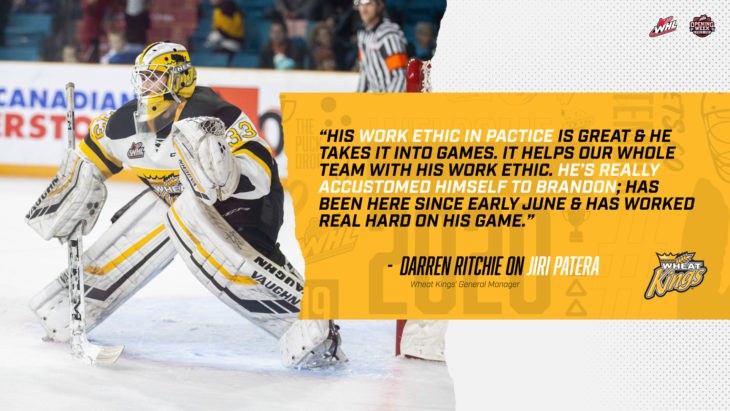 Behind Patera is second-year goaltender Ethan Kruger, eager to take on more games than the 22 he saw action in last season. Third on the list is 17-year-old Connor Ungar, who dazzled with a 34-save shutout last season against the Red Deer Rebels and will look to make an impression soon enough.

In the now and the then, the Wheat Kings are in a good spot between the pipes.

Player to watch: If you didn’t know already, Colorado Avalanche prospect Luka Burzan is good at the hockey.

Part of that rise was due to an extra 10 special-teams goals, going from three in 2017-18 to 13 in 2018-19, but the Wheat Kings care the most about having a leading talent to carry them offensively every night. One of just 11 players to reach the 40-goal plateau last season, Burzan is that type of leading offensive talent that teams can begin to foster strong playoff hopes with.

One thing to like about Burzan is his ability to stay in the lineup. Playing 66 games with the Moose Jaw Warriors as a rookie, he appeared in 72 games in 2017-18 between his two clubs, then played a full 68 this season. If he can be an offensive leader throughout another full season, it’ll further cement his status as one of the most reliable forwards in the league.

It’s not just the Brandon Wheat Kings who he’s been able to shine for either. Burzan spent part of his summer with Hockey Canada, attending the World Junior Summer Showcase in Michigan. Now on the radar for Canada’s National Junior Team, a great start to his season would aid his case for making the roster for the 2020 IIHF World Junior Championship. 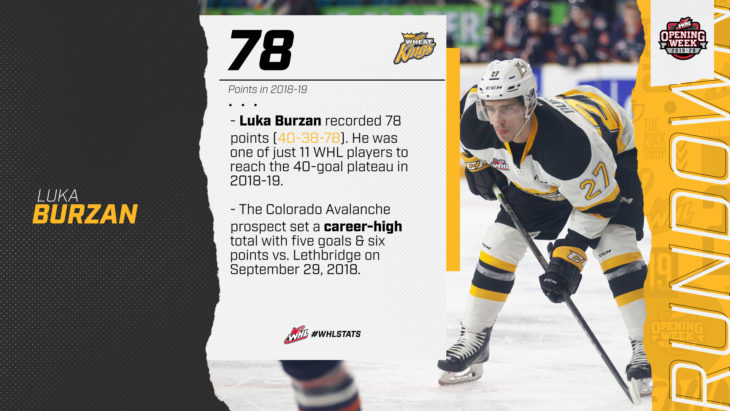 Prognosis: The Wheat Kings have been a model team in the WHL’s Eastern Conference in terms of regular season success and any falters by their standards have been immediately followed by some of their brightest moments.

After missing the WHL Playoffs in 1992, they put themselves on the path to win their second WHL Championship four seasons later. Sitting out the 2000 WHL Playoffs, the Wheat Kings rebounded with three trips to the Eastern Conference Championship in the next five seasons, featuring one more appearance in the WHL Championship Series.

The Wheat Kings will be eyeing playoff success in the 2019-20 season but are perhaps better positioned for 2020-21 season as well, should key players like Luka Burzan play two more years the Wheaties. The team also has a rising star in Nolan Ritchie, who scored once in a four-game audition last season.

Ritchie wrapped up a perfect 2018-19 season with a Manitoba Midget AAA Hockey League (MMHL) Championship for his hometown Brandon AAA Wheat Kings as well as Most Valuable Player honours after racking up 94 points (39G-55A) in 47 games.

With a young defensive group full of experience, the duty falls on their tandem between the pipes to be the team’s x-factor.

Expect the Wheat Kings to compete with the best in their division and be in the thick of the playoff race down the stretch.