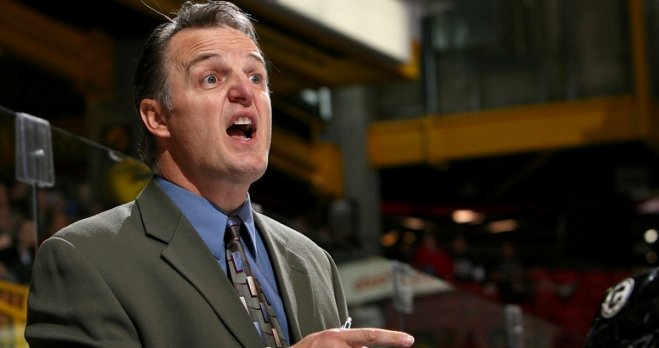 Victoria, BC – The Victoria Western Hockey League (WHL) Franchise is proud to announce that Marc Habscheid will continue with the Victoria Franchise as their General Manager and Head Coach after holding the same position with Chilliwack over the past two seasons. During his time with the Bruins he compiled a 65-64-6-9 record and led the club to the WHL Playoffs in both seasons.

Habscheid comes to Victoria with a successful hockey pedigree as both a coach and a player. His coaching career has spanned over 13 years and was highlighted during the 2003-04 season when Habscheid led the Kelowna Rockets to their only Memorial Cup Championship. That season he also was named the Canadian Hockey League and WHL Coach of the Year. His playing career began in the WHL with the Saskatoon Blades. From there he went on to compete in 345 NHL games with Edmonton, Minnesota, Detroit and Calgary over his 15 professional seasons.

“The opportunity to continue my role in Victoria is very exciting for me and my family.” Habscheid said. “RG Properties is known as a first class company and I look forward to representing both the city of Victoria and also RG.

“The last two years in Chilliwack we saw a marked improvement on the ice with this franchise, and I look forward to continuing to build this team and program in Victoria.”

The majority of his 13-year coaching career has been spent in the WHL with Kamloops, Kelowna and Chilliwack, but the 48-year-old Habscheid began his coaching career during the 1996-97 season with a year at the helm of the Melfort Mustangs of the Saskatchewan Junior Hockey League (SJHL). Habscheid also had a stint coaching in the National Hockey League (NHL), as he served as the Associate Coach for the Boston Bruins during the 2006-07 campaign.

“We are happy that Marc has decided to stay on with the Victoria WHL Franchise,” team president Dave Dakers said. “Marc has had significant success in the past and we look forward to him replicating that here.”

The Swift Current, SK native also garnered international success in the coaching world when he took the reigns of various teams for Canada. He began his career with Hockey Canada in 2001 when he was named an assistant coach for Canada’s Under-20 World Junior team. In 2003, he was named head coach of the Under-20 team, and led Canada to a silver medal at the World Junior Hockey Championships. He also coached Canada to gold medals in consecutive World Hockey Championships (2005 and 2006), and was a member of the coaching staff for Canada’s 2006 Olympic squad in Turin, Italy. Habscheid also won a gold medal as the assistant coach for Canada’s National U-18 Team in 1999. He also became the first person in Canadian hockey history to both play and coach for the National World Junior team.

Victoria, BC – The Victoria Western Hockey League (WHL) Franchise is proud to announce that Pat Conacher will continue with the Victoria Franchise as their Assistant General Manager and Assistant Coach after holding the same positions with Chilliwack last season. Conacher helped lead the Bruins to a 33-31-0-4 record in 2010-11 with a WHL Playoff berth.

The Edmonton, AB native brings a wealth of experience both as a player and coach to the Victoria franchise. Conacher won a Stanley Cup playing with the Edmonton Oilers during the 1983-84 season to highlight his 521 career games across a 17-year National Hockey League (NHL) career. The former forward spent his time in the NHL with the Oilers, New York Rangers, New Jersey Devils, Los Angeles Kings and Calgary Flames.

“I have known Pat for 28 years and he brings a wealth of experience to our franchise” General Manager and Head Coach Marc Habscheid said. “He has played and coached at the NHL level as well as served as an agent and a colour analyst. His experience makes him an invaluable resource to our players and to me.”

Conacher rejoins General Manager and Head Coach Marc Habscheid behind the bench after being part of his coaching staff in Chilliwack last season. Conacher also was part of Habscheid’s Kelowna Rockets coaching staff during the 1999-00 season and played with him for two years (1983-84 and 1984-85) with the Oilers.

The 52 year-old began his coaching resume as a player-coach for the Canadian National Hockey Team in the 1997-98 season before spending three years as the Assistant Coach of the NHL’s Phoenix Coyotes between the 2001-02 and 2003-04 campaigns. Following his time in Phoenix, Conacher moved to become a head coach in the American Hockey League for two years with the Utah Grizzlies (2004-05) and San Antonio Rampage (2005-06). Prior to his season in Chilliwack he was most recently a member of the Toronto Maple Leafs’ scouting staff for two years (2007-08 and 2008-09).

Originally drafted by the Rangers in 1979 (round four, 76th overall), Conacher totaled 139 points (63g-76a) in his 521 career NHL contests. He also went to the Stanley Cup Final with the Kings in 1993, and was twice named their most inspirational player and unsung hero.

Conacher also played 459 games in the American Hockey League (AHL) between six teams where he scored 115 goals and 211 assists for 326 points.

Prior to becoming a professional hockey player, Conacher played for the Saskatchewan Junior Hockey League’s (SJHL) Battleford Barons in 1976-77 prior to one season with the WCHL’s Billings Bighorns (1977-78) and one campaign (1978-79) in the WHL split between the Bighorns and Saskatoon Blades

Following his playing career, Conacher spent one season (1997-98) as a radio color analyst for the Mighty Ducks of Anaheim.

VICTORIA WHL FRANCHISE ANNOUNCES RADIO PARTNERSHIP WITH THE ZONE @ 91.3
Catch all Victoria WHL action from Dave Sawchuk beginning this fall on The Zone @ 91.3!

Victoria, BC – The Victoria Western Hockey League (WHL) Franchise is proud to announce that the team has entered into a radio partnership with the Zone @ 91.3.

Beginning this fall, the Zone will broadcast all 72 regular season games and every playoff contest for the Victoria WHL Franchise. All broadcasts will feature Dave Sawchuk bringing all the play-by-play action. Additionally, each broadcast will include a pre-game and post-game show, with all home pre-game shows broadcast live from the Kings Feast Restaurant inside the Save-On-Foods Memorial Centre.

In addition to live broadcasts of all Victoria WHL games, the Zone will also feature a weekly 30 minute show on Sunday evenings which will include special features, analysis, and previews of upcoming contests.

“The Zone and RG Sports and Entertainment have had a strong partnership in the past and this is just an extension of that relationship,” team president Dave Dakers said. “Over the last seven years a lack of a radio deal was a shortcoming, but with this deal hockey fans in Victoria can now catch all their WHL action on the local airwaves.”

Sawchuk, a native of Athabasca, AB, brings 10 years of radio experience to the broadcast booth after most recently providing color commentary for the Golden Baseball League’s (GBL) Victoria Seals. Sawchuk additionally spent time providing color commentary for the Grande Prairie Storm of the Alberta Junior Hockey League (AJHL). A Radio and Television graduate of the Northern Alberta Institute of Technology, Sawchuk is also in his fourth year as Music Director for the Zone.

“It’s both an honor and a privilege to be part of the broadcast team that will bring the excitement of WHL hockey to Victoria this season,” Sawchuk said. “The Zone @ 91-3 is thrilled to be working with a first-class organization like RG Properties to provide the passionate and knowledgeable hockey fans of Victoria with a top-notch product on the ice and on the air.”