Born in Dodsland, Saskatchewan, Chynoweth was the driving force behind the growth and development of Major Junior Hockey throughout Canada over the past four decades. Chynoweth’s career in both the WHL and the Canadian Hockey League spanned 37 years. He was appointed President of the WHL in 1972 and held that position for 23 years before becoming the majority owner of a WHL expansion franchise in Edmonton in 1996. The franchise relocated to Cranbrook, British Columbia in 1998.

Chynoweth also played a major role in the game at the national level, serving as President of the CHL for 20 years from 1975 – 1995. During his tenure as CHL President, Chynoweth was instrumental in forming the partnership between CHL and Hockey Canada in 1981 to oversee Canada’s National Junior Hockey Team. The Hockey Canada and CHL partnership led to the formation of Hockey Canada’s Program of Excellence and Canada’s dominance in International Hockey at the junior level.

Chynoweth, the WHL Chairman of the Board until his passing, has served in this capacity on two separate occasions since 1996 and also has served as a member of the CHL Board of Directors.

As President of the Kootenay Ice, Chynoweth together with his son Jeff, who served as Vice-President and General Manager, had operated one of the most successful franchises in the WHL, having recorded one of the top winning percentages in the WHL over the past 10 years. The Kootenay Ice captured the WHL Championship twice in 2000 and 2002, and went on to win the Memorial Cup Championship in Guelph in 2002.

Ed’s son Dean was a defenceman with the Medicine Hat Tigers when they won back to back Memorial Cup Championships in 1987 and 1988. In his capacity as CHL President in 1988, Ed had the privilege of presenting his son Dean, as Captain of the Tigers, the Memorial Cup. 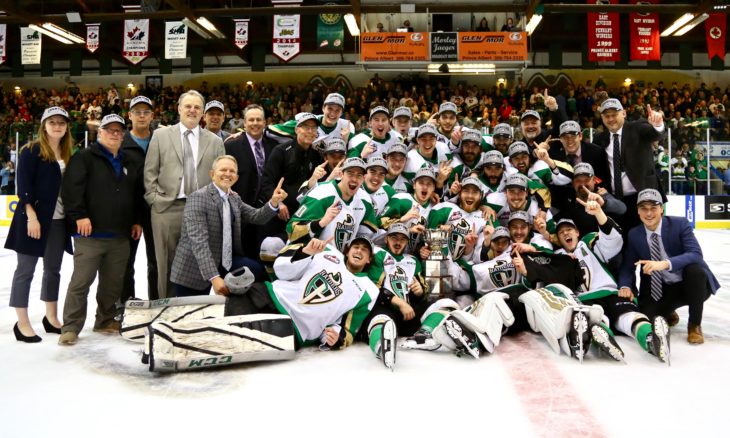 WHL Champions and recipients of ‘The Ed Chynoweth Cup’