TEAM PACIFIC MOVES ON TO U-17 SEMI-FINAL 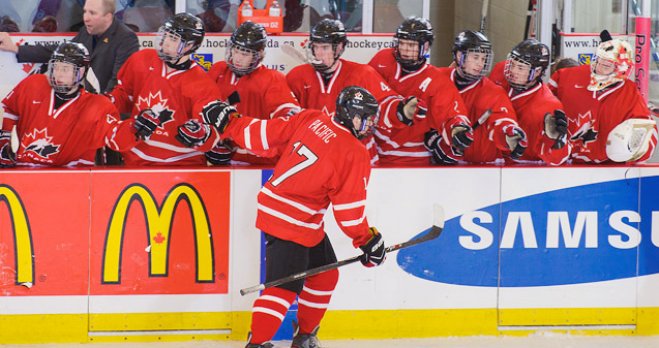 TEAM PACIFIC MOVES ON TO SEMI-FINAL – NORTH SYDNEY, N.S. – Pacific clinched first place in Group B and ended the reign of the defending gold medallists with a 3-1 win over Sweden in the preliminary round finale for both Thursday at the 2014 World Under-17 Hockey Challenge.

Adam Musil (Delta, B.C./Red Deer, WHL) scored once and added an assist for Pacific, as did Brad Morrison (Prince George, B.C./Prince George, WHL). It’s the first time Pacific has won its group since the 2006 tournament in Regina, Sask.

Glenn Gawdin (Richmond, B.C./Swift Current, WHL) had the other goal for Pacific, while Filip Ahl answered for Sweden, which will not have the chance to defend the gold medal it won last year in Victoriaville, Que.

The game was a goaltending showdown, with Sweden’s Felix Sandström and Pacific’s Zach Sawchenko (Calgary, Alta./Moose Jaw, WHL) keeping the game tied at a goal apiece through two periods before Pacific pulled away early in the third.

With the winner guaranteed a semifinal spot and the loser out of gold medal contention, both teams played on their heels for most of the opening period and the game headed into the first intermission tied 0-0.

Ahl, the biggest player up front for the Swedes at six-foot-two and 207 pounds, opened the scoring just 1:26 into the second period, blasting a slap shot under the blocker of Sawchenko.

Minutes later, after Ty Ronning (Burnaby, B.C./Vancouver, WHL) used his speed to earn a Pacific power play, Morrison banged in the rebound of a Jansen Harkins (North Vancouver, B.C./Prince George, WHL) shot from the point to tie the game.

After earning an assist on the Morrison goal, Musil got one of his own 26 seconds after the puck dropped to start the third period, and Gawdin made it a two-goal game less than two minutes later, redirecting Harkins’ cross-crease pass.

The teams crashed and banged their way through the last 18 minutes, but there would be no more scoring.

Sawchenko did it all for Pacific; in addition to making 25 saves, he launched the offense by making beautiful stretch passes and helped out his defensive corps by cutting off Swedish passing lanes.

Sandström made 37 stops in a losing cause; Pacific outshot Sweden 40-26.

Pacific will meet Russia in the semifinals in North Sydney on Friday (7 p.m. AT), which follows Sweden meeting Ontario in the fifth-place game at the Emera Centre Northside (2 p.m. AT).

WEST FALLS TO QUEBEC — NORTH SYDNEY, N.S. – Nicolas Roy (Amos, Que./Chicoutimi, LHJMQ) showed why he was selected first overall in the 2013 QMJHL Entry Draft on Thursday afternoon, collecting a goal and two assists to lead Quebec over West 4-1 at the 2014 World Under-17 Hockey Challenge.

Brandon Gignac (Repentigny, Que./Shawinigan, LHJMQ), David Henley (Val-d’Or, Que./Val-d’Or, LHJMQ) and Samuel Blier (Plessisville, Que./Trois-Rivières, LHMAAAQ) also scored for Quebec, which will wait for the result of Thursday night’s Sweden-Pacific game to find out if it will play in the semifinals.

Cameron Hebig (Saskatoon, Sask./Saskatoon, WHL) had the lone goal for West, which will play in Friday’s ninth-place game (2 p.m. AT) against Germany in Port Hawkesbury, N.S.

Hebig equalized for West at 11:46, but Henley put Quebec up for good six minutes later, stepping out the penalty box, taking a heads-up pass from Roy and beating West goaltender Logan Flodell (Regina, Sask./Regina, SMAAAHL) over the glove.

West’s defence struggled with the speed of the Quebec forwards, but it was patience with the puck that set up Quebec’s third goal; captain Jérémy Roy (Richelieu, Que./Sherbrooke, LHJMQ) took his time coming out of the defensive zone, and the found its way from Fortier to Nicolas Roy for a 3-1 advantage.

Quebec capped the scoring midway through the second period. Anthony Beauvillier (Sorel, Que./Shawinigan, LHJMQ) won a battle in the corner and fed Pascal Aquin (Repentigny, Que./Collège Esther-Blondin, LHMAAAQ), who snuck behind Flodell’s net and found Blier, who ripped a one-timer past the West netminder.

Flodell finished with 26 saves while his Quebec counterpart, Olivier Tremblay (Saguenay, Que./Jonquière, LHMAAAQ) stopped 23 of 24 to record the win.