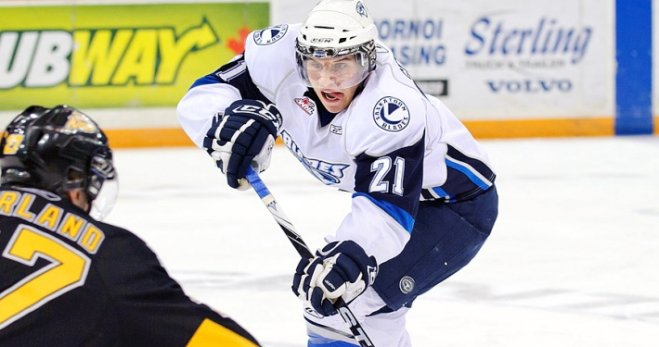 CALGARY, AB. – The Western Hockey League announced today that forward Brayden Schenn, of the Saskatoon Blades, has been named the HUSKY WHL Player of the Month for February.

A 19 year-old year from Saskatoon, SK, Schenn led all WHL scorers collecting 32 points through the month of February, finding the net 13 times and accumulating 19 assists to go along with a +9 rating.  He collected points in 12 of 13 games played which included nine multi-point games and two game winning goals.  During Schenn’s 12 game point streak through February his efforts earned him a Three Star selection seven times including four 1st Stars.

Since his return to the WHL from the Los Angeles Kings Schenn has points in 18 of his 20 games played totaling 44 (17 goals, 27 assists).  He currently leads all WHL scorers in the points-per-game category with 2.20 and his consistent play also helped the Blades to a 10-3-0-0 record through the month, which included a six game winning streak.  The Saskatoon Blades are the top ranked team in the WHL with a 48-13-0-2 record for 98 points and sit second BMO CHL MasterCard Top 10 Rankings for week 22.

Schenn is playing his fourth season in the WHL, first with Saskatoon after the Blades acquired the 5th overall pick in the 2009 NHL Draft from the Brandon Wheat Kings at the WHL Trade Deadline.  He has appeared in 215 career WHL regular season games collecting 302 points (111 goals, 191 assists) and maintaining a +97 plus/minus rating.

His accomplishments make Brayden Schenn a deserving choice as the HUSKY WHL Player of the Month for February.