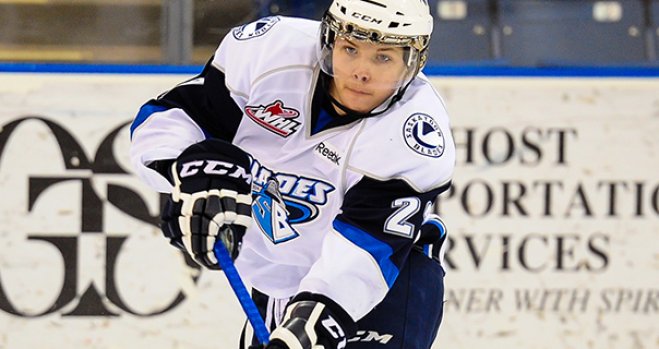 Calgary, AB – Leading up to the 2014 NHL Draft at the Wells Fargo Center in Philadelphia on June 27-28, WHL.ca and WHL Web TV, will highlight WHL players who are highly ranked by NHL Central Scouting leading up to draft day.  This week’s featured WHL player is Saskatoon Blades’ highly skilled forward Nikita Scherbak.

Nikita Scherbak completed his first season in the Western Hockey League with the Saskatoon Blades.  The native of Moscow, Russia, piled up 28 goals and 50 assists for 78 points in 65 games to lead the Blades in scoring while also leading all WHL rookies in scoring by a margin of 19 points.  Scherbak was the WHL Eastern Conference finalist for Rookie of the Year.

An offensively gifted forward with dazzling puck skills, tremendous offensive instincts and a fiery competitive will, Scherbak came into the WHL as an unknown but quickly established himself as a game-breaking player for the rebuilding Blades.  At 6’2”, 174-lbs, Scherbak does not shy away from the physical game, and is more than willing to go to the tough areas of the ice and engage physically.  However, Scherbak’s best attributes are his outstanding offensive skills.  He can carry the puck on a string, beat players one-on-one and bring fans out of their seats with his high skill level, and boasts a quick and accurate shot.  Scherbak also skates very well and has excellent agility, making him an elusive target for opposing defenders.  An unselfish player, Scherbak is a threat as a playmaker with his passing skills and vision.  Scherbak boasts a tremendous compete level and desire to make an impact, and is the type of player who makes those around him better.

“He’s an electrifying type of player who has game-changing ability,” said Colin Priestner, Managing Partner of the Saskatoon Blades.  “His skating is at the highest end in Junior hockey…he’s an elusive skater, and his ability to turn and shift is among the best in the WHL.

“He’s one of the best passers in the League, his shot is deceptive and accurate, and he’s never afraid to go to the dirty areas,” he said.  “He’s a guy who I think could be the steal of the NHL Draft this year.”

Priestner saw plenty of Scherbak over the course of the 2013-14 WHL season.  On a young, inexperienced Blades team, Scherbak became the go-to cog in the offense, especially after veterans Nathan Burns and Collin Valcourt were traded.  What impressed Priestner most about the young Russian star was his willingness to carry the team, offensively, and his ability to make his line mates better players.

“He had 20-year-olds Burns and Valcourt, who are elite players in the League, as line mates at the beginning of the season,” said Priestner.  “When we traded those guys, (Scherbak) kept the same points-per-game average while playing with Ryan Graham and Cam Hebig, who are much younger and less experiences, and elevated those two players to a whole new level, to the point where they will be impact players in the future because of playing with him.”

Nabbed by the Blades in the second round, 109th overall, in the 2013 CHL Import Draft, Scherbak played for Team Russia in the 2013 SUBWAY Super Series – his first time playing internationally for his country.  The 18-year-old also participated in the 2014 BMO CHL/NHL Top Prospects Game, picking up an assist for Team Cherry.  Prior to joining the Blades, Scherbak played in the Russian MHL U-22 League for Kapitan Stupino, where he posted seven goals and 14 points as a 16-year-old in 2012-13.

Did you know…Scherbak is the first Russian-born player to lead the WHL in rookie scoring since Ivan Vologjaninov of the Lethbridge Hurricanes in 1992-93.