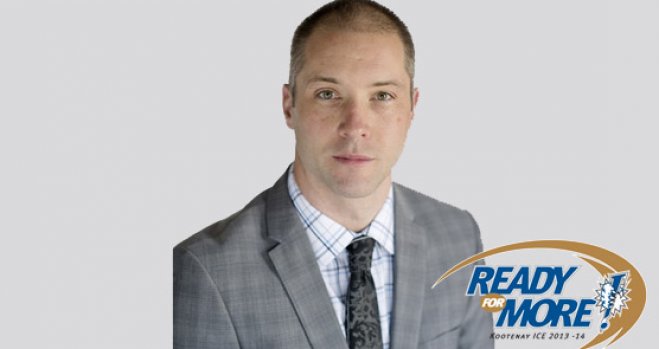 Cranbrook, BC – Jeff Chynoweth, General Manager of the Kootenay ICE Hockey Club, today announced the Club has hired Jay Henderson as their new Assistant Coach. Henderson, who has signed a two year contract, replaces Chad Kletzel who resigned in May to resume his teaching career in Lethbridge, Alberta.

“We are excited to add Jay Henderson to our coaching staff. Jay is passionate about the game and has been learning the coaching side of the business by giving back at the both the minor hockey and college levels for the past number of years. He was a leader throughout his professional career (team captain in 2004-2005 and three time AHL Man of the Year for Community Service) and played the game at the highest level and will be a good complement to Ryan McGill.” continued Chynoweth.

“Having coached Jay as player in both the Western Hockey League and American Hockey League I know firsthand that his hard work, character and commitment to getting better each and every day will allow him to succeed as a coach. He played professional hockey for 13 years and our players will benefit from his playing experiences and his knowledge of the game,” commented Head Coach Ryan McGill.

Jay Henderson played four seasons in the WHL with the Red Deer Rebels (1994-1996) and Edmonton ICE (1996–1998). He was drafted by the Boston Bruins in 1997 NHL Entry Draft (9th round – 246th overall) and played 33 games with the Bruins over three years. Jay also played parts of nine seasons with four AHL teams winning three Calder Cups in his career (Providence Bruins – 1998-1999, Houston Aeros – 2002-2003 and Milwaukee Admirals – 2003-2004). He finished his professional career in 2010 after playing in Germany (2005-2008), Austria (2008-2009) and England (2009-2010). For the past two years Jay was an Assistant Coach with the Northern Alberta Institute of Technology (NAIT) Ooks of the Alberta Colleges Athletic Conference. During his time at NAIT he also worked with Hockey Alberta as a Head Coach for the Alberta Cup and as an Instructor with Team Pacific.

Jay Henderson is a 34-year-old native of Sherwood Park, Alberta. He and his wife Megan are the parents two children; daughter Mila (5) and son Seamus (3).