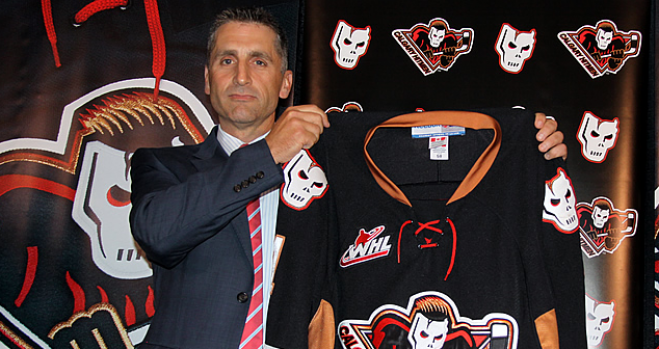 French joins the Hitmen following a season with the Medvescak Zagreb of the KHL, where he guided the expansion team to the playoffs after a 92-point regular season that included setting a league record for most consecutive wins by a debut team at eight.

“Mark comes to us with tremendous coaching experience from all levels of hockey and is a proven winner,” said Mike Moore, Hitmen general manager and vice president of business operations. “He is a teacher of the game, has a passion and commitment to the development of players and is well respected in hockey circles.  We are fortunate that Mark identified the Calgary Hitmen as a great opportunity for his coaching career and that he and his family were willing to come here from Croatia.  We are grateful for the cooperation from his former team, the Medvescak Zagreb, and look forward to watching our team develop and succeed under his leadership and direction.”

French, a native of Milton, Ontario, brings a wealth of experience and winning to the Hitmen having been both a head coach and an assistant coach with the Washington Capitals’ AHL affiliate, the Hershey Bears for six seasons.  Named an assistant coach with Hershey during the 2007-08 season, French helped guide the Bears to the their 10th league title in 2009; and in 2010, in his first season as head coach, led Hershey to their second-straight Calder Cup and 11th in franchise history.

“Not only am I honoured to be named the head coach of the Calgary Hitmen, but I am excited to lead them into their 20th anniversary season in the Western Hockey League,” said French, now the eighth head coach in franchise history.  “The Hitmen are an organization known for their strong foundation, history of success and passionate fans.  I look forward to working with the talented players the front office staff has assembled and I am grateful for the opportunity.”

French began his coaching career with Brock University in September 1996 and in August 1999 moved into the role of assistant coach and assistant general manager with the OHL’s North Bay Centennials for three seasons. From 2002-04, French was the head coach at Wilfrid Laurier University and prior to his record-setting coaching role with Hershey, he was assistant coach with the ECHL’s Atlantic City Boardwalk Bullies in 2004-05 and head coach and director of hockey operations for the Wichita Thunder of the Central Hockey League from 2005-07.  In June 2013, he signed as head coach with the Medvescak Zagreb in Croatia.

French and his wife, Kimberly, have a daughter, Ellie and son, William.

Kisio, entering his eighth season with the Hitmen, joined the WHL club in August 2007 as video coach and assistant coach after four successful years at the University of Nebraska-Omaha where he played for the Mavericks (NCAA) and graduated with a bachelor’s degree in criminology.  Following the 2007-08 season, Kisio moved exclusively into the role of assistant coach and in October 2012 was appointed associate coach.  In 2009-10, Kisio helped guide Calgary to their second WHL championship title after finishing atop the regular season standings with 52 wins and 107 points.

“Brent is a tireless worker committed to the success of the Hitmen franchise both on and off of the ice,” said Moore.  “Along with his coaching talent, he has provided support for a number of years in the planning of team travel, pre-scouting of teams and players and hockey administrative functions.  We are continually seeking new methods and opportunities for the future success of our team in our community and Brent’s support will be a valuable asset in meeting these demands.”

Kisio and his wife, Abby, and have a daughter, Summer and son, Owen and are expecting their third child in July.