The Western Hockey League is privileged to be able to honour a number of key individuals who were instrumental in the development of the League with its annual awards.

With this in mind, each of the WHL’s trophies and awards bears a tribute to our contributors.

The most prestigious individual award of the Western Hockey League has been named the Four Broncos Memorial Trophy in memory of the four members of the Swift Current Broncos who died in a tragic accident on December 30, 1986.

The four players (Trent Kresse, Scott Kruger, Chris Mantyka and Brent Ruff) all died when the Swift Current bus crashed while enroute to a game in Regina.

“In order that we never forget this incident, we have named this trophy in memory of these four young men,” stated Ed Chynoweth.

“Like hundreds of other players before them, and hundreds that will follow, WHL players spend countless hours riding the bus in pursuing their hockey aspirations. By naming the Most Valuable Player Trophy in honor of these four players, hopefully we will never forget the sacrifice given by these young men.” 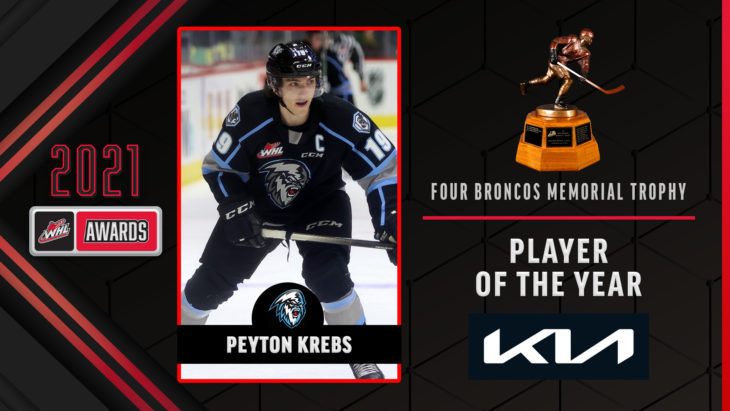 * Also selected as the CHL Player of the Year

Daryl K. (Doc) Seaman has been a pioneer in promoting higher education and hockey. For many years Doc Seaman has been a staunch supporter of the efforts of Hockey Canada and the Western Hockey League to ensure all players are able to combine education with hockey.

As well, he has been a great promoter of the City of Calgary, as evidenced by his efforts to bring the Atlanta Flames to Calgary to become the beloved Calgary Flames of the National Hockey League.

Due to Seaman’s support for programs that promote the combining of education and hockey, and the Western Hockey League’s education program in particular, the WHL chose to name this Scholastic Player of the Year Award in honour of Doc Seaman in 1996.

The player selected as the top student-athlete in the WHL will be presented the Daryl K. (Doc) Seaman Trophy. 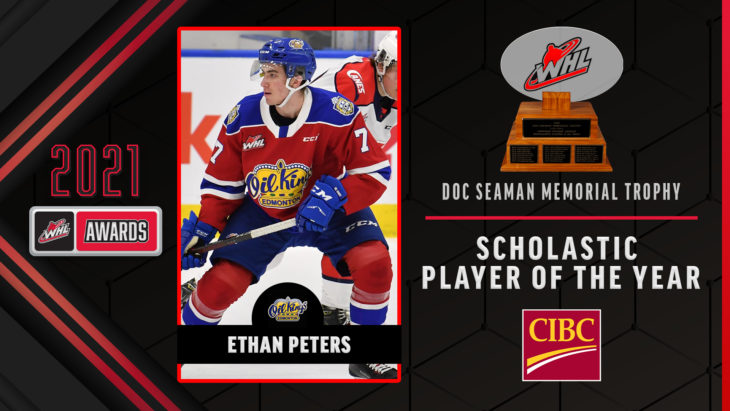 Scholastic Player of the Year Winners:

* Also selected as the CHL Scholastic Player of the Year, an award first instituted at the CHL level in the 1988-89 season.

In both years Bob Clarke played in the WHL, he captured the League scoring title. In 1968-69, Clarke’s Flin Flon Bombers captured the League Championship. His NHL career spanned 15 seasons with the Philadelphia Flyers, in which time he captained the team to a pair of Stanley Cups. He was awarded the Hart Trophy as the League’s MVP three times, the Masterton Trophy and the Selke Trophy once each, and was also named an All-Star four Times. 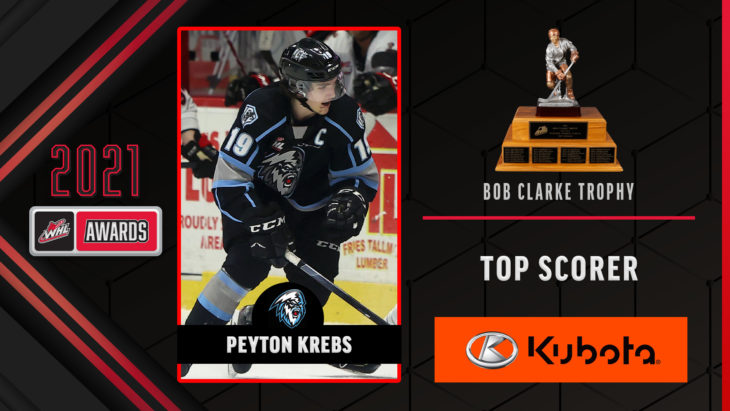 Tragedy struck twice in the 1986-87 season in the WHL. After the Broncos bus accident, the WHL was further grieved when Brad Hornung was paralyzed after an unfortunate accident in a game in Regina on March 1, 1987. In his two years with the Regina Pats, Brad Hornung combined talent, desire and an unmistakable sportsmanlike attitude. This award will honour other players who display the same attributes. 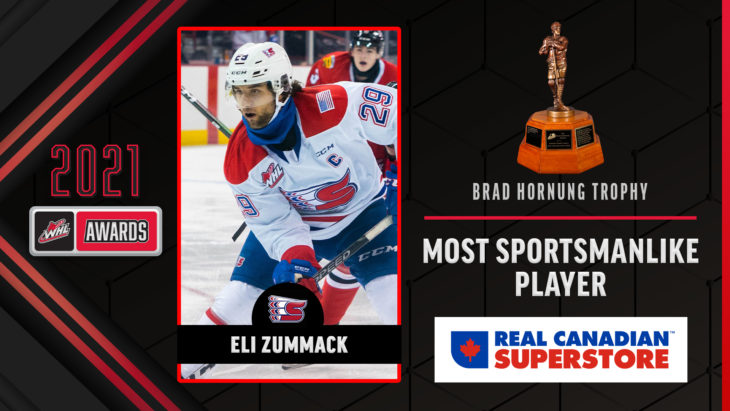 Bill Hunter is honoured for his role as a founder and builder of the League. Hunter served as Owner, General Manager and Coach of the Edmonton Oil Kings, while also serving as the first Chairman of the Board. Without a doubt, Bill Hunter was the driving force that kept the WHL in the forefront of Major Junior Hockey in Canada during his years as the “Godfather” of the Edmonton Oil Kings.

It goes without saying that Major Junior Hockey has never seen an individual as dedicated and enthusiastic as the man known as the “Fiery Red Leader”, who along with his long time friend, the late Scotty Munro, were “the WHL” in its formative years. 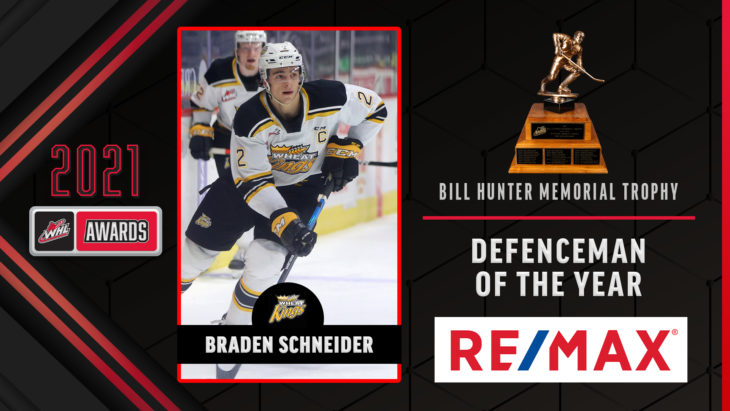 * Also selected as the CHL Defenceman of the Year

Jim Piggott is being honoured for both his role in building the Saskatoon Blades and the Western Canada Hockey League, now known as the WHL.

Piggott was the sole owner of the Blades and an original founding member of the League. He also owned teams in the old professional Western Hockey League in such places as Los Angeles, Saskatoon, Regina, Brandon and Minneapolis-St. Paul.

Piggott served as Chairman of the Board, and along with Del Wilson was one of the driving forces to bring the three Major Junior Leagues in Canada together under one roof. 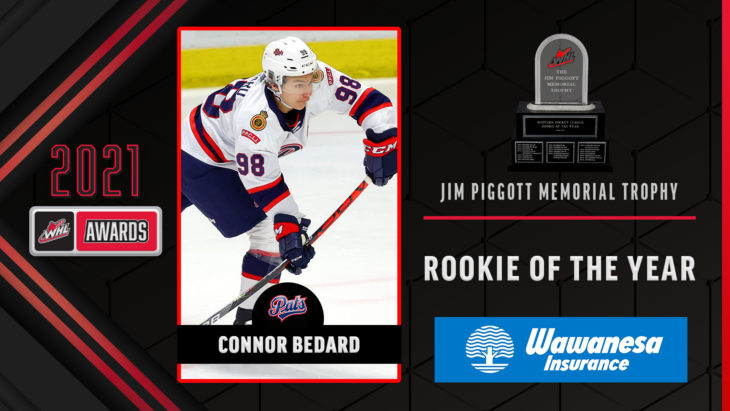 Rookie of the Year Winners:

* Also selected as the CHL Rookie of the Year

Del Wilson is being honoured for his many years of service to both the Regina Pats and the Western Hockey League. Wilson was an owner, Governor and General Manager of the Pats and served six years as Chairman of the Board, as well as the WHL’s Referee-in-Chief. Wilson, along with Piggott, led the WHL into a partnership with Ontario and Quebec, and today there are 59 Major Junior teams in the three Leagues. Wilson passed away in November of 2015 at 88 years of age. 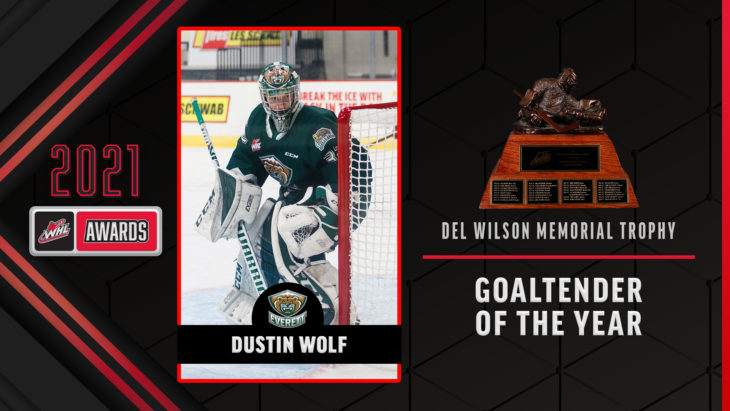 * Also selected as the CHL Goaltender of the Year

The Dunc McCallum Memorial Trophy honours the outstanding record and contribution of Dunc McCallum while coaching the Brandon Wheat Kings from 1976-81. McCallum compiled an impressive coaching record over six WHL seasons, with 251 wins, 123 losses and 41 ties.

Coach of the Year Winners:

* Also selected as the CHL Coach of the Year

Lloyd Saunders is being recognized and honoured for his outstanding contribution to sports in general, but more particularly for his continuous support of Junior Hockey in Western Canada.

Saunders is the “Dean” of sportscasters in Western Canada and in his earlier years he covered almost every major sporting event imaginable from the Olympics to the World Series, from the Grey Cup to Memorial Cups and Briers.

He has also been honoured by being selected to the Canadian Football Hall of Fame.

Executive of the Year Winners:

*Also selected as the CHL Executive of the Year

The WHL Regular Season Points Champion will continue to receive the Scotty Munro Memorial Trophy. Along with Bill Hunter, Munro was one of the original founders of the WHL. He also served as General Manager of the Estevan Bruins and both General Manager and Coach of the Calgary Centennials.

* Also selected as the CHL Humanitarian of the Year

Al Paradice is being recognized for his many years of service to the Western Hockey League. After many years as a referee in the WHL, including officiating in the 1977 Memorial Cup in Vancouver, Paradice stepped into the position of West Division Supervisor of Officials. The top on-ice official, as voted on annually by the coaches and General Managers of the WHL teams, receives the Allen Paradice Memorial Trophy. 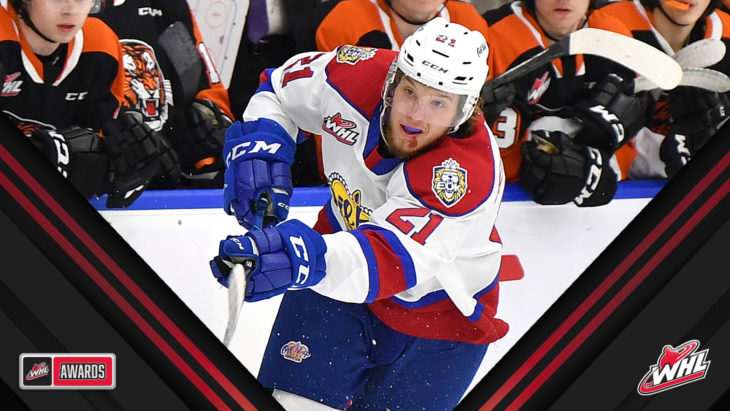