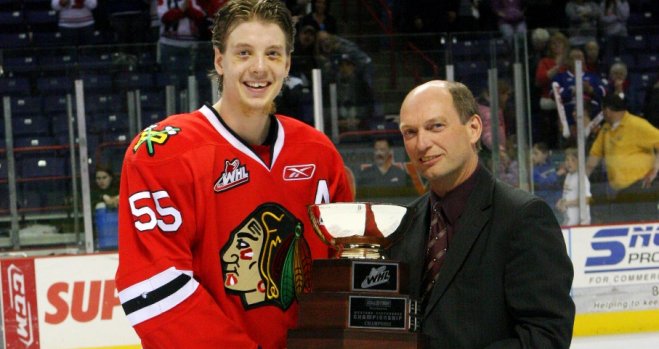 The victory in Game 6 in Spokane gives the Winterhawks a 4-2 best-of-seven series win over the Chiefs.  It’s the first Western Conference title for the Hawks since the 2000-01 season.

The Winterhawks will now face the Husky WHL Eastern Conference Champion Kootenay Ice for the Ed Chynoweth Cup and a berth in the 2011 MasterCard Memorial Cup tournament in Mississauga, ON.

Sven Bartschi and Craig Cunningham each tallied a goal and two assists for the Winterhawks while Ty Rattie, Nino Niederreiter and Ryan Johansen each picked up a goal and an assist in the Game 6 win.  Troy Rutkowski – with his third of the post-season – also counted for the Hawks.

Marek Kalus, Mike Aviani and Levko Koper scored for the Chiefs, who went into the third period with the score tied at 3-3 but gave up three goals in the final frame in the loss.

Mac Carruth turned aside 24 of 27 shots he faced in the win for the Winterhawks. James Reid stopped 32 of 38 shots in a losing cause for the Chiefs.