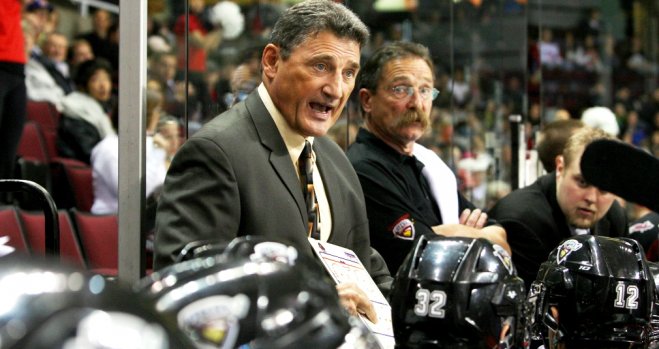 CALGARY, Alta. – Hockey Canada, in partnership with the Canadian Hockey League (CHL), announced Monday that Don Hay (Kamloops, B.C.) head coach of the WHL’s Vancouver Giants, will be the head coach of Canada’s National Men’s Under-18 Team for the 2013 IIHF Ice Hockey U18 World Championship, April 18-28 in Sochi, Russia.

Jody Hull, 44, will be a member of Canada’s coaching staff for the second time, winning a gold medal as video coach with Canada’s National Men’s Summer Under-18 Team at the 2011 Memorial of Ivan Hlinka tournament. Hull finished his fifth season on the bench with Peterborough, but first as head coach after being promoted from assistant coach in December. He won a gold medal as a member of Canada’s National Junior Team in 1988, before playing more than 800 games over 16 NHL seasons with Hartford, the New York Rangers, Ottawa, Florida, Tampa Bay and Philadelphia.

Yves Sarault, 40, will join a Team Canada coaching staff for the first time but has represented Canada in numerous international competitions as a player including the Spengler Cup on three occasions, winning a gold medal in 2007. Sarault graduated from the CHL in 1992 and played parts of eight NHL seasons with Montreal, Calgary, Colorado, Ottawa, Atlanta and Nashville before playing eight years in Switzerland.

“Any opportunity to work with Hockey Canada is a special one, and as a staff we look forward to getting to Russia and getting to work,” said Hay. “We’re excited to get the team on the ice and begin working towards a third under-18 world championship for Canada.”

Canada’s coaching staff, along with Kevin Prendergast, Hockey Canada’s head scout of the men’s Program of Excellence, will help select Canada’s roster for the 2013 IIHF Ice Hockey U18 World Championship from players whose CHL teams that either missed the playoffs or are no longer competing in the playoffs.

The 2013 IIHF Ice Hockey U18 World Championship opens for Canada on April 18 when it takes on Slovakia. The Canadians will also face Germany, Sweden and Switzerland in the preliminary round.

CLICK HERE FOR THE 2013 IIHF WORLD UNDER-18 CHAMPIONSHIP SCHEDULE

TSN/RDS, the official broadcasters of Hockey Canada, will broadcast Canada’s final preliminary round game against Sweden on Tuesday, April 23, as well as both semifinals on Friday, April 26 and both medal games on Sunday, April 28. Check your local listings for game times in your area.