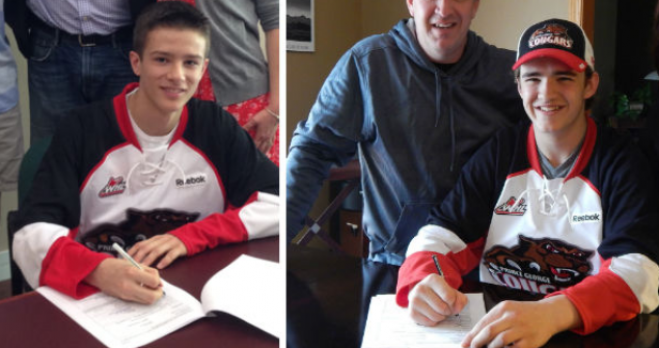 “This is a very exciting time for our organization,” said the Prince George Cougars Interim G.M./Head Scout and Director of Player Personnel, Todd Harkins. “Justin Almeida and Max Martin were the cornerstones of our 2014 draft, and they will compliment the rest of our group extremely well moving forward into our New Ice Age.”

Justin Almeida (5’9”, 130 pounds) was selected in the first round (fifth overall) of the 2014 draft, and was widely considered to be one of the top offensive talents available.

“We couldn’t be happier welcoming Justin and the Almeida family to the Prince George Cougars,” adds Harkins. “He’s an exceptional talent with a maturity beyond his years and he understands the Northern culture and what it means to be a Cougar.”

Next season, Almeida will play with the Cariboo Cougars of the B.C. Major Midget League, which will enable him to practice regularly with the Prince George Cougars. It also allows local fans and management to follow his development throughout the season.

“To hear my name called on draft day by the Prince George Cougars was amazing,” said Almeida moments after being selected by the Cougars back on May 1st. “It’s very special to me getting the chance to play up North in front of family and friends.”

Max Martin (5’11”, 176 pounds) was taken early in the second round (27th overall) of the 2014 draft and was a player that the Cougars had ranked much higher than where he was selected.

“Max Martin will provide us with a terrific mix of compete, fearlessness and skill on our back-end,” comments Harkins. “He comes from a terrific family who is familiar with the WHL and we expect him to anchor our blueline for many years to come.”

“I was instantly excited when I saw my name pop up on that board,” said Martin after being selected by the Cougars on May 1st. “I consider myself to be a two-way defenceman who can put the puck in the net, and I have a physical side to my game too.”

As part of the New Ice Age, both players received welcome phone calls on draft-day from Dan Hamhuis and Eric Brewer. Each player is eligible to play in five games as an under-ager in the WHL during the 2014-2015 season and fans will get their first glimpse of both players during Training Camp in August.