BRANDON SUN: WHEAT CITY WAS ‘BIG PART OF GROWING UP’ FOR REDDEN 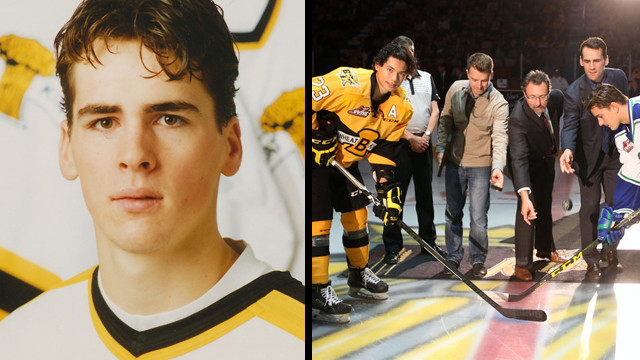 Playing more than 1,000 games in the National Hockey League never dimmed Wade Redden’s fondness for his time as a Brandon Wheat King.

The retired 38-year-old father of two joined former Wheat Kings netminder Geoff McIntosh in dropping ceremonial pucks prior to the Wheat Kings’ home opener on Friday, drawing a warm ovation from a crowd of more than 5,000.

“It’s a lot of fun to come back and I always get nostalgic when I think about my days in Brandon,” Redden said. “My wife always laughs, but I think those were great years.”

Redden was a member of the team for three seasons from 1993 to 1996, playing in 178 regular-season games and 51 more in the playoffs as the team won one WHL championship and went to the Memorial Cup twice. He was named the Western Hockey League’s rookie of the year in 1993-94 and earned a number of WHL and Canadian Hockey League all-star selections.

He also won a pair of gold medals with Team Canada at the world junior tournament, before embarking on a pro career that stretched from 1996 to 2013.

Redden played for head coaches Bobby Lowes and assistant Mark Johnston in Brandon. He said players are a sponge at that age and he still remembers things they said.

But the enduring lessons came in work ethic.

“I guess the biggest thing was just coming and working hard and learning how to be a hockey player, coming and giving a good effort,” Redden said. “As a player we loved doing it. They demanded a lot of us, but it was such a fun time.”

Redden joined the Ottawa Senators as a 19-year-old in 1996, beginning an NHL career that included 1,023 regular-season games, 106 playoff contests and two all-star games.

He won gold with Canada at the 2004 World Cup and was named top defenceman at the 2005 world championship as Canada earned a silver medal.

Redden, who along with McIntosh was given a WHL alumni achievement award on Friday, retired to Kelowna, B.C., were he had bought a summer home years earlier.

He lives there with his wife, Danica, and daughters, Leni, a five-year-old who just started school, and Harper, who is three. The couple are expecting their third child in March.

Redden said that he’s healthy after leaving the game, and still skates once a week with buddies in Kelowna.

“I would have done a few things differently with the end of my career,” said Redden, who was sent to the American Hockey League for two years by the New York Rangers because they didn’t want his contract to count against the NHL’s salary cap, before returning to the NHL to split one more season between the Boston Bruins and St. Louis Blues. “I kind of bounced around and went to the minors and did all that, but I think at the same time you learn a lot about different things. I certainly appreciate the game and what it did for me and the times I did have.”

With career earnings of more than $70 million, Redden is in a position to relax. While he said the thought of coaching occurs to him when he’s watching games, he’s happy being a family man.

He appears at charity events and is also active with the alumni on teams he has played with in the past. On Saturday, he took time to visit his Wheat King billets Jim and Lori Timmer.

He said the one constant with the Wheat Kings has been head coach and general manager Kelly McCrimmon, who Redden considers a friend and mentor.

McCrimmon said that Redden has remained close to the organization since the day he was drafted.

“He’s one of the best players to ever pull on a Wheat Kings jersey,” McCrimmon said. “It’s really special to have him come back and for the fans to recognize him for the great career that he had as a Wheat King and on into professional hockey. It was really good to see him.”

Redden’s talents were also recognized last week when the WHL named its top 125 players of all time. Only 27 defencemen were selected from the league’s 50-year history.

Redden was thrilled with the nod.

“That’s a huge honour,” Redden said. “Fifty years and all the players that came through this league, a lot of great players, I scanned the list and saw the names there. It’s pretty good company to be in.”

It’s extra special because that company includes former Wheat Kings great Brad McCrimmon, who gave Redden some advice at a Wheat Kings hockey school one summer that he never forgot.

“I remember him saying to all of us young guys how these would be the best years of your careers,” Redden said. “And he wasn’t far off. I was fortunate to play 1,000 games and play in the NHL for all those years, but when I look back at my time in Brandon, I was just a young guy just starting to learn things in hockey and in the world and in life.

“It was certainly a big part of growing up.”