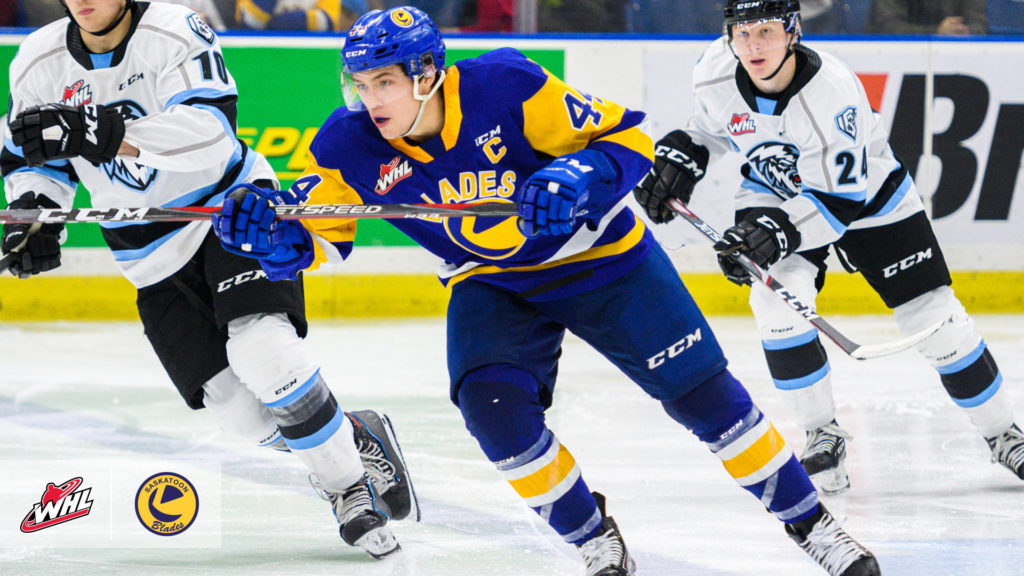 Mission accomplished for the captain.

Chase Wouters has reached his goal of raising $10,000 through the Nutrien Face-Off for Hunger campaign, with all proceeds going towards the Saskatoon Food Bank & Learning Centre.

“I partnered with Nutrien this past season in an effort to raise money for those who are less fortunate in our community,” said the Saskatoon Blades captain. “I am very honoured to say we have raised a tremendous amount of money and awareness for the Saskatoon Food Bank & Learning Centre. I want to thank Nutrien for giving me the opportunity to take part in such an amazing campaign, and allowing us to help those who are struggling to make ends meet.”

This self-fuelled campaign began last September, which saw Wouters partner with Nutrien to sponsor $10 for every faceoff win through the 2019-20 season. One of the best at the dot across the WHL, Wouters snapped back 837 pucks before the season was cut short due to the rapid spread of COVID-19.

Although Wouters didn’t reach his goal of winning 1000 faceoffs, he’s seeing first hand that mastering this craft can pay off in numerous ways. Nutrien has generously decided to fork up the remaining funds to hit $10,000 raised through the campaign.

“Nutrien continues to invest in our community and we’re thrilled to have them as one of our biggest partners,” said Tyler Wawryk, Director of Business Operations for the Blades. “It’s been exciting for us and for our fans to cheer on Chase this year in the face-off circle and he did not disappoint being among the league leaders all season long. It’s been great to watch it all unfold and while we’re experiencing some challenging times in our community right now, this donation from Nutrien comes at a critical time for those in need.”

This money will go a long way towards helping vulnerable families in Saskatoon during desperate times. The COVID-19 pandemic has resulted in a major shortfall of essential foods and necessities for those who rely on the food bank every day.

Laurie O’Connor, the Executive Director for the Food Bank & Learning Centre, says these funds will go a long way towards helping replenish their shelves, and ultimately help many Saskatoon families overcome the hardships of the pandemic.

“Our huge thanks to everyone at the Saskatoon Blades and of course to Chase Wouters and to Nutrien as well,” said O’Connor. “During challenging times, Nutrien and the Saskatoon Blades have banded together to care for their neighbours. The support from the Face-Off for Hunger initiative will go a long way to helping us put nutritious food onto the tables of families who need it most right now.”

But the donations certainly don’t end there. Wouters is also putting forth $200 out of his own pocket, spurred on by yet another self-driven initiative. On January 30th, the captain offered to donate $1 for every faceoff win until the season’s end, and put a call out to the public to match his pledge.

Hey #BladeCity, I am challenging you to join me in the @NutrienLTD face-off for hunger! Jump on board https://t.co/bZnjMhZ2hV pic.twitter.com/YwrgrKJ636

The 20-year-old’s generosity spurred on numerous community organizations and public figures to join in on the cause. 11 pledges to match Wouters’ donation were also collected through the Saskatoon Blades website.

“I want to thank everyone who joined in by pledging to match my donation,” added Wouters. “It was overwhelming to see such an incredible amount of support come together to help lift the community up. Thank you!”

Wouters racked up 200 faceoff wins over the final 15 games in the regular season, which means another $200 going directly into the hands of the Saskatoon Food Bank & Learning Centre.

Wouters has been one of the top face-off men in the WHL for the last couple of seasons. In 2018-19, the Lloydminster, Alta. product won 799 draws in total. Despite calling the season off early, he was still able to set a new career-high in faceoff wins this past winter, finishing second across the league in victories while approaching the dot the most out of any player. To date, he’s won 2333 draws for the Blades on 4283 attempts in his career — an impressive 54.5% win-rate.

The Saskatoon Food Bank & Learning Centre is in dire need of financial donations of any amount right now, and are hosting a virtual food drive on its website. To continue Chase’s mission to raise money for the food bank and help give back to the community, click here.