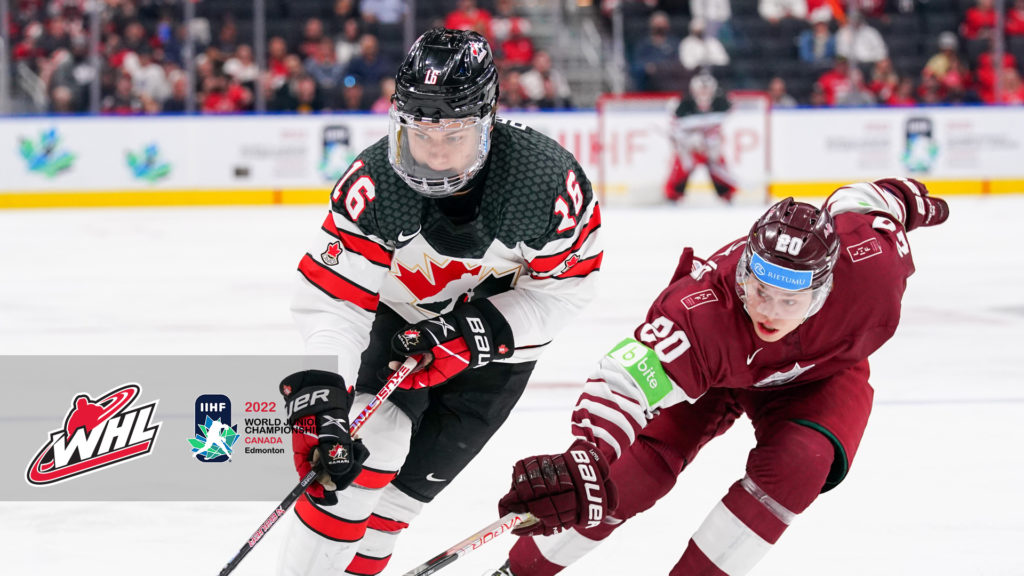 Edmonton, Alta. – Canada opened its quest for a gold medal at the 2022 IIHF World Junior Championship with a 5-2 victory over Latvia Wednesday. Three WHL players scored, while Edmonton Oil Kings netminder Sebastian Cossa turned in a 22-save performance in goal.

Time now for a closer look at all the action from Day 2 of the World Juniors.

Sweden (3) vs. Switzerland (2)
Two goals inside the first 35 seconds of the third period pushed Sweden through to a 3-2 win versus Switzerland in the opening game for both sides. Fabian Lysell (Vancouver Giants) recorded an assist on the deciding goal.

Former Portland Winterhawks forward Simon Knak is the captain of this year’s Swiss entry, he led his club in time on ice, playing 23:46 and finishing the game with a team-leading four shots on goal.

Latvia (2) vs. Canada (5)
Canada earned a 5-2 victory over Latvia in its tournament opener thanks in part to big performances from WHL players. After Connor Bedard (Regina Pats) opened the scoring with a quick snapshot 7:31 into the first period, the Canadians got second-period tallies from defenceman Olen Zellweger (Everett Silvertips) as well as a one-handed effort from Brandon Wheat Kings captain Ridly Greig, who was named Canada’s Player of the Game.

On the Latvian side, Medicine Hat Tigers defenceman Bogdans Hodass scored a power-play marker in the third period, which at the time cut Canada’s lead to 4-2.