around the dub saskatoon blades 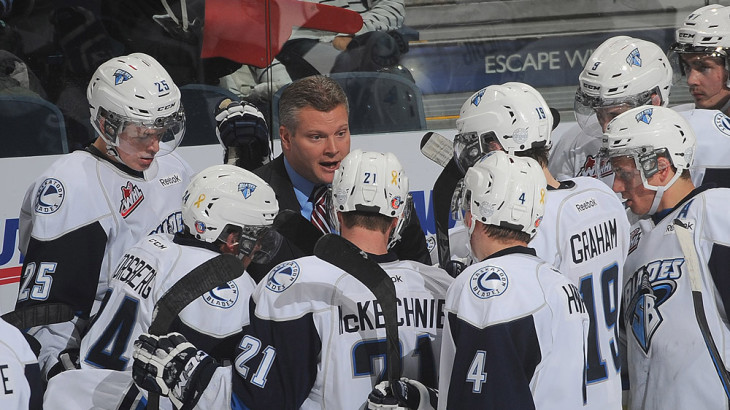 The Saskatoon Blades have named Dean Brockman as their 21st head coach, with news Bob Woods is returning to the NHL.

Woods, who joined the Blades two years ago, has signed on to be the right hand man to Buffalo Sabres head coach Dan Bylsma.

“This was too great of an offer to pass up,” says Woods. “It’s a chance to work alongside a Stanley Cup winning coach who also coached in the AHL. It’s an example I’d love to follow. I have mixed emotions leaving the Blades since the team is turning the corner but I know the players are in great hands.”

Brockman, 48, who was alongside Woods for the past two seasons, is thrilled with the opportunity.

“We’ve come through three difficult but necessary years but the time for talk is over. It’s time for results and we are committed to take a major step forward this season. We have a room full of great players who have outstanding character. They’ve taken great strides during our time together and I can’t wait to work with them to seize the opportunity we have in front of us.”

Brockman is well-suited to take the top job. Previous to his two years with Woods, Brockman coached the Humboldt Broncos of the Saskatchewan Junior Hockey League to incredible success over 17 years. He led the team to victory in the Royal Bank Cup on two occasions, 2003 and 2008. In two other appearances at the national championship, Humboldt was the runner-up in 2009 and lost the semi-final in 2012.

The product of St. Benedict, Saskatchewan, also guided the Broncos to four Anavet Cup Championship titles in five appearances at the event, which matches up SJHL champion against the winner of the Manitoba Junior Hockey League. Brockman was named SJHL Coach of the Year four times.

Brockman also has a history of success with Hockey Canada. He coached Canada West to a silver medal at the World Junior A Championship in 2012, taking home a gold medal at that same event as an assistant coach one year earlier in 2011.

While Brockman has some strategic thoughts on adjusting the team’s play on the ice for more wins, he also sees opportunity on the mental side of the game. “I have great passion for our players and I want to help guide them through the obstacles that stand in their way so we can together find – and enjoy – success.”

“We believe Dean is a great fit to carry on to what we have been building for three years while adding a different perspective to our players,” says the new general manager, Colin Priestner. “Our fans are anxious for a return to the playoffs and so are we. It’s been a long wait and we have every intention of returning to the playoffs this coming season.”

Priestner assumes the GM position on a full time basis, a role he has largely carried out while Woods focused the bulk of his attention on rebuilding the team on the ice. Priestner, who becomes the 7th GM in Blades history, may be only 32 years of age but he guided the team through the previous three drafts, the results of which have been widely praised by independent observers. He has also crafted the restructuring of the Blades scouting system as well as rebuilding the 50-man list.

Priestner, who has a degree in Political Science from the University of Alberta and is currently enrolled at the Business of Hockey MBA program at Athabasca University, becomes the youngest GM in the WHL.

“Colin has brought tremendous talent to our organization. He was very insightful introducing critical structure and analysis to our recruitment process, and that is reflected in the quality of players who are joining our great group of veterans,” says president Steve Hogle. “The fact he’s the youngest GM in the league is similar to some hires of bright young minds in the NHL, such as the Phoenix Coyotes signing 26-year-old John Chayka as their GM.”

One of the men who has been at Priestner’s side every step of the way while rebuilding the team, Assistant General Manager Steve Hildebrand, is being promoted to Associate General Manager. The man commonly known as “Hilty” was also just named by Hockey Canada as one of the Directors of Operations for the U17 national team.

“Hilty is an incredible talent and we’ve worked very closely over the last three years. We plan on making all decisions together to do what’s best for the Blades,” adds Priestner. “This is a great day for the Blades. We are extremely excited to build upon what we have achieved so far. Our fans are anxious for a return to the playoffs and so are we. It’s been a long wait and we have every intention of returning to the playoffs this coming season.”

“Any time someone at our level, whether it’s a coach or a player, makes it to the NHL, it’s a great thing for the franchise and shows we are developing quality people,” adds Hogle. “Bob Woods helped poured a great foundation here. Now we have a dynamite person in Dean Brockman to build upon that and take the team to new success.”

The staff will be rounded out in short order. The freshly minted head coach has a few candidates in mind for his assistant. But Dean Brockman also knows he’ll receive a lot more interest, adding, “We’ve got a good thing going here and it’s only going to get better.”

The Blades welcome Dean as their new head coach and thank his family for supporting him in this new endeavour. The team also thanks Bob Woods for his work here and wishes him well in his return to the NHL.