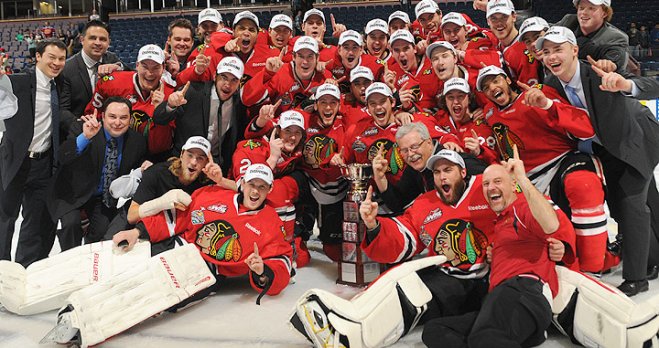 The Winterhawks, who lost in both the 2011 and 2012 WHL finals, claimed a 4-2 best-of-seven series win over the defending WHL Champion Oil Kings with their Game 6 triumph, proving the third time is the charm.  The Hawks lost the 2011 WHL final to the Kootenay Ice before falling to the Oil Kings in the Championship series last year. 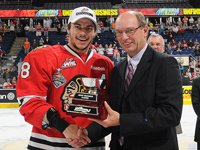 Ty Rattie scored three times for the Hawks, including his 20th goal of the 2013 WHL playoffs, in the series-clinching win.  Rattie, who got two of his goals while shorthanded, also set a new WHL record for career playoff goals with an even 50, surpassing the old record of 47 held by former Medicine Hat Tigers star Mark Pederson dating back to 1988.

Rattie, a St. Louis Blues prospect, was named the MVP of the WHL Championship series.  The 19-year-old ended the post-season with 20 goals and 36 points in 21 games.  With 95 points in 76 career playoff games, Rattie ranks third on the WHL’s all-time list of career playoff points.

The Winterhawks also booked their spot in the 2013 MasterCard Memorial Cup tournament in Saskatoon, SK, claiming the berth as WHL Champions.  They will join the host Saskatoon Blades, the QMJHL Champion Halifax Mooseheads, and the winner of the OHL Championship series between the Barrie Colts and the London Knights.

It’s the third WHL Championship for Portland, who previously won in 1998 and in 1982.

Oliver Bjorkstrand and Taylor Leier – with a late empty-net marker – also scored and Nic Petan had three assists for Portland, who were the top team in the WHL during the regular season.

Mac Carruth stopped 26 of 27 shots he faced to backstop the Winterhawks to the Championship series-clinching win.  Carruth, a Chicago Blackhawks prospect, chalked up his WHL-record 49th career playoff win in his final WHL contest.

Travis Ewanyk scored the only goal for the Oil Kings, who opened the scoring just 1:04 into the first period but gave up a pair of shorthanded goals to Rattie at 4:28 and 7:03 of the opening frame and never recovered.  The Oil Kings defeated Portland in seven games in the 2012 WHL Championship series.

Laurent Brossoit made 19 saves in a losing cause for the Oil Kings.

The Hawks will be making their fourth trip to the Memorial Cup tournament, having won the Memorial Cup in 1998 as WHL Champions and in 1982 as the host team.  Portland opens their Memorial Cup round robin schedule versus Halifax on May 18th.